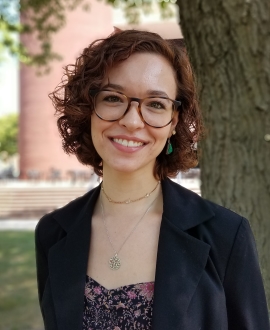 Bouncing back from spring break, the Women, Gender, and Sexuality Studies Lecture Series brought into discussion the topic of textbook affordability through Sarah Appedu ‘18. Now the Scholarly Communications Assistant at Musselman Library, the first-generation college alumn is using her skills to communicate textbook affordability through the viewpoint of social justice. Her presentation, entitled Textbook Affordability is a Social Justice Issue: How Open Textbooks are Paving the Way to Equality in Higher Education, sought to challenge students in their understanding of human rights and the right to education. Citing Article 126 of The Universal Declaration of Human Rights, Appedu noted that education is meant to add to the full development of the human personality, and strengthening respect for human rights as a whole.

When asked if students felt that they have the power to change textbook affordability, the members of the WGS 120 class remained silent. Only one student raised her hand, showing that the ever-increasing issue of the price of textbooks seems helpless to students at Gettysburg College. Recently, when the library asked the entire student body what they thought of textbook prices during Open Education Week, responses such as, “A joke,” “Wack,” “Tuition is already expensive enough,” and “My pell grant doesn’t cover this sh*t” were recorded on the poster board. There were so many responses written that employees had to take down parts of the display to fit all of the students’ thoughts. The Communications Assistant revealed that she was most affected by the Pell Grant comment, which is only given to students with exceptional financial need. This means families who make less than fifty thousand dollars a year, though most times the six thousand dollar grant is given to families with salaries less than twenty thousand. Sixteen percent of the Gettysburg College student body receives the Pell Grant, but almost all students struggle to pay the price of their textbooks each semester

The cost barrier to higher education in the United States kept 2.4 million low and moderate-income college-qualified high school graduates from completing college in the previous decade. The average borrowing debt nationwide is $28,650 and almost $37,000 in the state of Pennsylvania. When it comes to Gettysburg College, the average borrower in the class of 2017 owed $32, 323. This debt was shared by 62% of the class, while 38% were lucky enough to graduate bereft of debt. The cost of their books was not included in this statistic, although some paid upwards of $1,000 each semester. Those studying in the Arts & Humanities paid the least amount for their textbooks, but students with classes like Chemistry and Biology were plagued with textbook bills that were hundreds of dollars. As a result, students will take fewer courses, not register for a specific course, drop a course, withdraw from a course, earn a poor grade because they could not afford a book, or even fail a course. As Appedu said, “When parents compare their student debt to the price of their students, they often do not realize that the cost of textbooks has increased by a thousand percent since 1970.”

Unlike other consumer goods, textbooks are a compulsory purchase, so students are being told what to buy. People are forced to buy them by the school, and faculty are not always aware of how much their books cost. Some faculty who know the costs of their required books have few options, as some other books might not have the professor’s desired material or could be outdated. This is taken advantage of by publishing companies, who maintain high prices by publishing frequent new editions, creating monopolies, and pairing physical books with online access codes. Before, new editions were released every four to five years. In recent years, that number has dropped to every two years. Additionally, online access codes were created because students were buying and renting from each other, and reselling their access codes. By using these, publishing companies remain in control of their profit. These maladies cause buyback values to plummet. Books that are listed for over one hundred dollars on the bookstore website can be sold back for only three dollars.

Some textbooks, despite being hundreds of dollars, discriminate and include falsified information. Women in the field of economics take six months longer to be published, but a time tax causes females to be less likely to get tenure or have representation in the field. There are subject headings for homosexual, lesbian, and gay, but no subject heading for queer. There are many sub-headings under criminals like African-American criminals, Chinese-criminals, Hispanic-criminals, but there is no heading for white-American criminals. One textbook in particular, when it explained the Atlantic Slave Trade, said, “Patterns of Immigration: The Atlantic slave trade brought millions of workers from Africa to the southern United States to work on agricultural plantations.” Another textbook in Canada described the Trail of Tears as “Moving out, when European settlers arrived, the first nation peoples agreed to move to different areas to make room for the new settlements.”

Open textbooks pose a solution. Or, one in the making. 100% free to read – though people need to write, edit, and publish them – these books are often made by non-profit organizations to provide students with free, digital, and easy to share information. The books aim to compete directly with commercial textbook publishers. Via companies like OpenStack, books are being priced as low as $55, and science textbooks are hundreds of dollars cheaper for students.

The most expensive book on their website is a $55 chemistry book. It should be acknowledged that open textbooks are not always perfect, nor available across all areas. They are created particularly for the most enrolled and expensive classes. The 5 R’s of openness include: retain, reuse, revise, remix, and redistribute. Companies that make open textbooks are shaping the way students afford textbooks and utilize them to alleviate the economic pressures of textbook affordability.

Sarah Appedu is very proud of her job. Her parents could not afford to go to college, and her mom from rural Idaho moved to New York hoping to find more resources. Her dad dreamed of being a rockstar and attended community college to get an accounting degree, but could not afford the cost of the degree combined with the estimated student loan debt. Her mom was recently laid-off and is searching the job market for the first time since 1998. She uses her parents to motivate her and wants to make them proud by helping other students achieve affordable education. When she graduated, Appedu “felt wrong just reading her own name on that piece of paper.” She wants to do what her parents were not able to do. She encourages students to think critically about whose voices are being taught, talk to administrators, discuss issues of textbook affordability with peers, create or participate in research projects, and study student published interest research groups. With effort, textbooks can become more affordable.