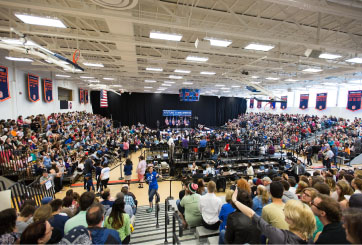 It was a bright spring day on Saturday, March 30 as crowds waited to hustle into the Bream Wright Hauser Athletic Complex at Gettysburg College.  Throngs of Bernie Sanders supporters were jostling to meet the self-proclaimed democratic socialist speak. Many waited outside after the stadium seating was filled and the candidate took the stage.

Sanders spoke of income inequality and our country’s need to provide veterans a fair shake.  A former Marine took the stage to address the serious mental health problems facing former combat veterans of the Iraq War.  Many service members were in the crowd to hear Sanders quote the Gettysburg Address and advocate for bolstering veterans benefits.

Sanders told a ready audience about his meteoric rise in the polls saying: “We are doing something pretty radical in American politics; we are telling the truth.”

The spectacle left many scratching their heads in wonderment, since Bernie Sanders had already given a similar speech at Gettysburg College three years previously during the 2016 presidential primaries.  In fact, he had given the exact same speech. 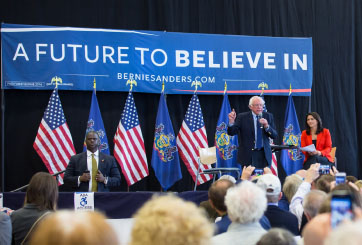 Sanders spoke on American politics and seemed to forget that he was in Gettysburg for the second time (Photo courtesy of Gettysburg College).

Only the members of the Class of 2019 were on campus for the original campaign stop, so Sanders was able to give his stump speech to a relatively fresh audience.  Those that had heard the presentation before said that Sanders had a much smoother delivery this time around. One moment of confusion occurred when Sanders referenced his opponent Hillary Clinton and then slipped up later by saying that he was catching up in the delegate count.

Attendees audibly moaned during the Q&A session.  When asked what year it was, Sanders had to start counting fingers.  What was his position on juuling? Sanders, in an attempt to integrate himself with the youth in the crowd, said, “Only the fat-cat top-tenth-of-one-percent smoke cigars—I am totally with today’s youth in using a more affordable nicotine delivery system!”  When asked if Sanders is too old for the White House he responded: “I already sleep in a hospital bed. Who cares if that bed is parked at 1600 Pennsylvania Avenue or in a small deli across from the Wendy’s in a small predominantly white aged community in Burlington, Vermont.”

After rapid hand-waving from panicked campaign staff, the Q&A was quickly ended and Sanders returned to the rehearsed script for a polished oration decrying the evils of capitalism and a rigged economy.

After the event, Sanders was reportedly heard muttering to his staff: “We need to hurry this schedule up.  I’m not gonna live forever, and we need to drive to Gettysburg College for my big veteran’s speech!”