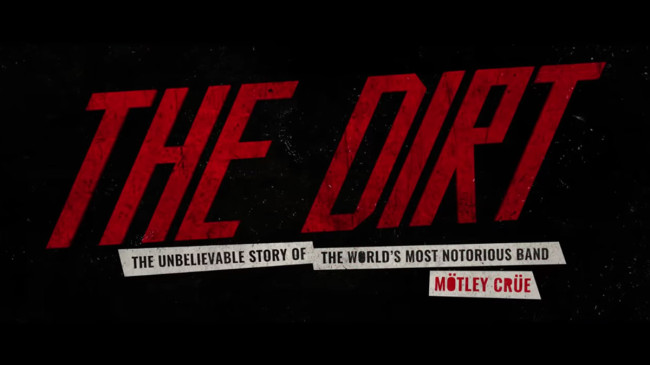 The Dirt is the latest rock & roll biopic and a Netflix exclusive movie directed by Jeff Tremaine, whose most notable credits include the Jackass movies. The film follows the over-the-top exploits of the heavy metal band Mötley Crüe. Comparisons to the Freddie Mercury biopic, Bohemian Rhapsody, which came out several months ago are warranted, because on the surface, this appears to be derivative of that film, possibly an attempt to cash in on some of the success that Bohemian Rhapsody garnered in the box office.

The Dirt certainly follows the formula to which ninety percent of similar biopics adhere. It’s a story about the group’s meteoric rise, tragic fall, and final redemption. But while the Freddie Mercury movie was a family-friendly affair, The Dirt revels in the sleazy and drug-fueled shenanigans that frequently put Mötley Crüe in the tabloids. Jeff Tremaine does not exhibit any restraint during the wild party scenes. Cocaine, alcohol, sleeping pills, heroin, and plenty of sex are all present. There’s also a particularly disgusting scene involving Ozzy Osbourne that escalates to possibly the most gag-inducing scene I’ve seen in any movie this year. It’s all incredibly dumb and juvenile, but then again, so was Mötley Crüe. The main appeal of this film is how shocking and ridiculous it is, and I suspect that this was also what appealed most to the teenagers who idolized the group in the eighties.

The cast of characters, Tommy Lee (Colson Baker), Nikki Sixx (Douglas Booth), Vince Neil (Daniel Webber), and Mick Mars (Iwan Rheon) all have good chemistry and distinct personalities. They also share some genuinely hilarious moments together. Nikki Sixx narrates the opening of the film, but there are also moments narrated by Tommy Lee and Mick Mars. There is one interesting self-aware moment where Mick Mars breaks the fourth wall and admits that certain events didn’t happen exactly as they occur in the film and that certain real-life characters are missing. Still, he asserts that “this is as good a version as any.” This sort of tongue-in-cheek moment is clever, but it doesn’t excuse the fact that the uglier sides of the real-life band members are omitted and their misogynistic behavior is glorified. Also, it seems out of place since this sort of wink to the audience never happens again.

Unlike the main band-members, most of the side characters are banal and flat. Take for instance, Tommy Lee’s multiple girlfriends and fiances, none of whom are developed at all. Lee’s parents also appear in the film, and it seems like they are central to his life at one point, but they are quickly forgotten and absent from the second half of the film. Pete Davidson plays a cartoonishly awkward representative from the record label that signs the group. I love Davidson on SNL, but it was just sad to see his character bumble around and get bullied by the musicians in such a two-dimensional role.

While Bohemian Rhapsody focused on long recreations of major performances, The Dirt is more focused on drama. Unfortunately, this is where the film really lacks. The cinematography is just so flat and generic that these scenes feel like they belong in a TV movie. Watching rock stars mope around and fight with each other is disengaging and half as fun as it sounds.

Ultimately, of course, the film wraps up with a redemption tour where the original band members all reunite and walk dramatically in slow motion toward the stage, arm in arm. Not very original or surprising.

The Dirt is the type of movie you might laugh at when you’re bored, but I would not recommend this to anyone outside of the die-hard Mötley Crüe fanbase. This film is just too vapid to deserve nearly two hours of your time. The party scenes are certainly wild, but what does it all mean? In the end, this film is too scared to say anything meaningful beyond “wow, I don’t know how they didn’t die from all of those stupid decisions.” Its lack of restraint makes it somewhat unique and I won’t be able to forget the image of Ozzy Osbourne snorting ants anytime soon, but a formulaic and by-the-numbers plot prevent this film from coming close to much funnier films, like Spinal Tap or even Walk Hard: The Dewey Cox Story, which already lampooned this formulaic brand of biopic years ago.