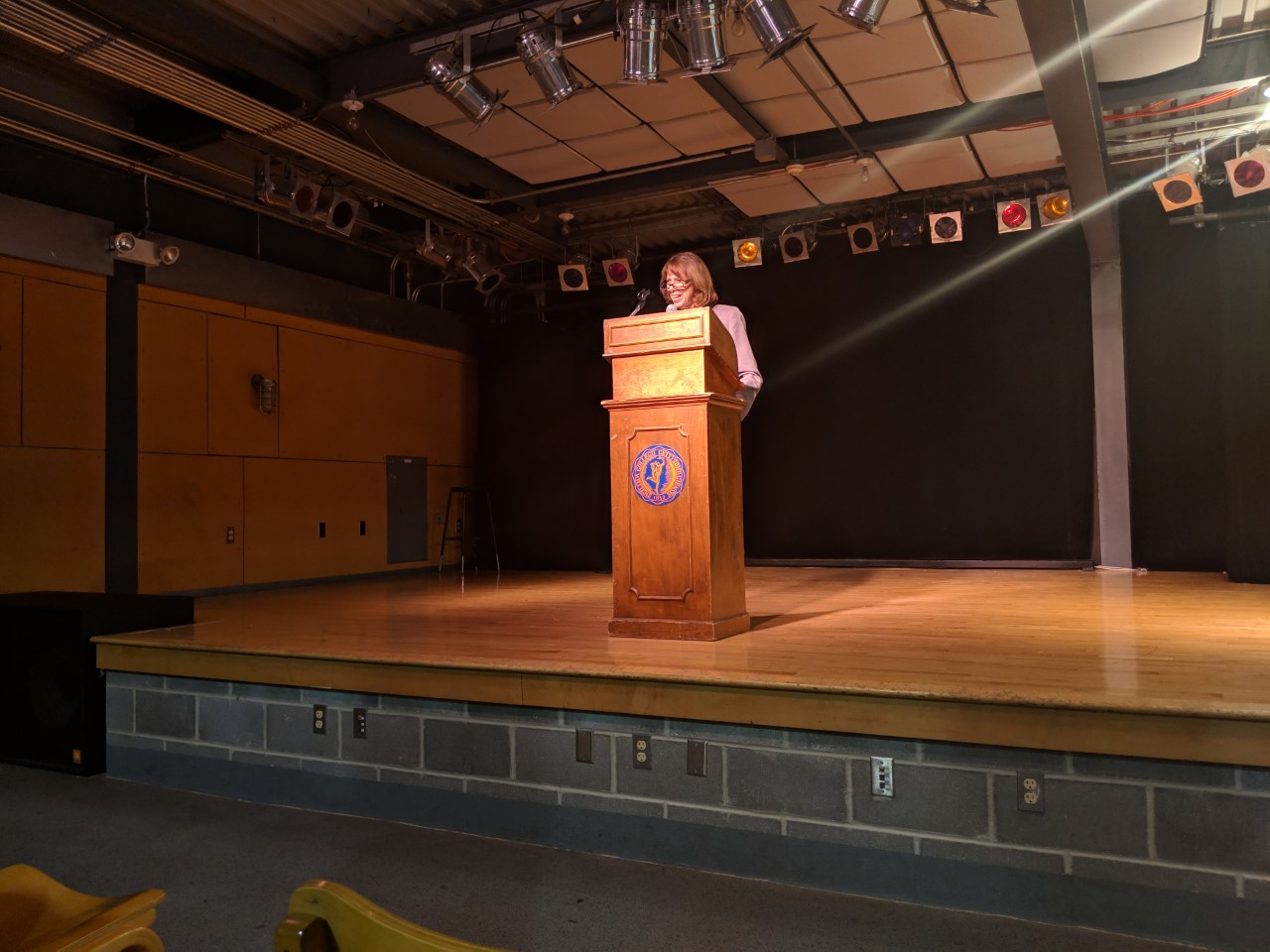 Pearson Cost ’19 began the event by introducing the first speaker, Phillips, as a political theory professor who received his PhD at Johns Hopkins and was a founding brother of Chi Rho Psi. Phillips started off joking about giving his last lecture two years into his career at the college. He then began to explain his tripartite obsessions with teaching, political theory, and liberal arts colleges and how excited and thankful he was to have the opportunity to explore all three at Gettysburg College.

Through the lens of philosophers Plato, Nietzsche, and Machiavelli, Phillips advised students that the world is a series of complex constructions and people must be self-reflective in order to succeed. In conclusion, he suggested that all students should be open to live by the Princely Advice: if one cannot live among those they lead and listen to them, they will be an unsuccessful leader.

Emma Stejbach ‘19 then introduced Hancock, acknowledging his eighteen years of service to the college, his position as History Department Chair, and his teaching of Africana Studies classes as well. Mentioning his specialization in the African American experience in U.S. history, she described him as a “champion for marginalized voices.”

Hancock began his lecture stating that he had been part of the Presidential Search Committee that chose President Janet Morgan Riggs to be the 14th President of Gettysburg College. He then delved into his past and his identity, explaining that without knowing the context from which a person comes from, one will never truly understand their actions. Professor Hancock emphasized that truth matters. Moreover, he asserted that the moral truth of society is lacking; further, the lack of accountability for those in power leave the vulnerable to be even more defenseless. He concluded by urging the students to fight for what is true.

James Mullen introduced the final speaker, proclaiming that the words “graceful, humility, leader, and Gettysburg” came to mind when anyone mentioned “the legend.” President Janet Morgan Riggs spoke frankly with the audience of students. She explained she did not have a grand plan before college, and she planned to only major in math but left with a degree in psychology as well, further pursuing her studies in graduate school. When she decided she wanted to teach psychology, she did not anticipate returning to Gettysburg College. After being a professor, working in the president’s office, holding the position of interim Provost, and holding the position of interim President at Gettysburg College, however, the Presidential Search Committee offered her the position of President of Gettysburg College and she accepted.

The role taught her many valuable leadership lessons, but she wanted to specifically share five with the audience. The first lesson was the value of hard work. President Riggs emphasized that one must show up and have serious work ethic. The second lesson was about expectations, bias, and stereotypes. In order to succeed as a leader, one must be aware of negative expectation and implicit bias and do everything in their power to avoid it. The third lesson: good decision-making requires context. She asserted that good leaders do not succumb to groupthink and often look at multiple points of view before making an important decision. She also warned to never assume that silence is agreement. The fourth lesson: it’s not all about the leader. She explained that a leader is no better than the rest; they have just have much more responsibility. The fifth lesson: leaders must walk the walk. The values of kindness, civility, respect, compassion, and the willingness to admit a mistake are essential to being a good leader. The single most important quality in a leader, in her opinion, is integrity. President Riggs concluded her speech by reminding students to keep their eyes open for opportunities and admitting that she will miss the students’ energy and passion the most upon her departure from her position.