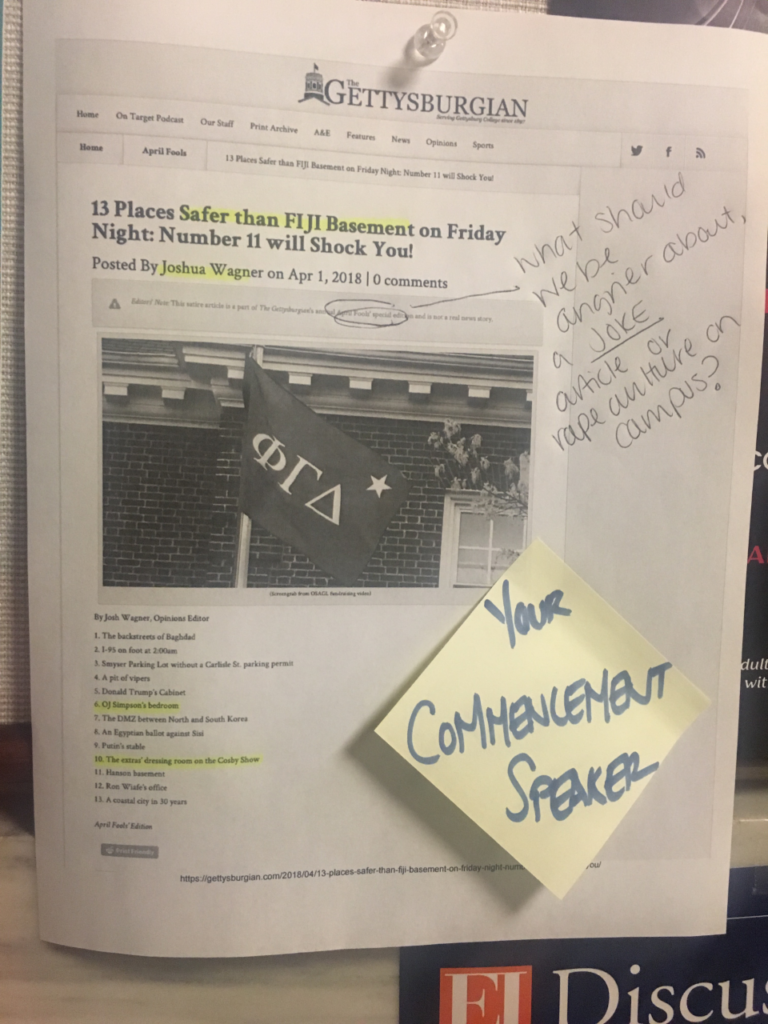 Before I begin, I’d like to acknowledge that I have only spoken to Josh Wagner once in my time here at Gettysburg, but I am well familiar with his name. As opinions editor, Josh has, in my opinion, done very well to represent the voices of our campus community.

The Gettysburgian is fair, not in that it is always equal in representation, but in the fact that everyone has the opportunity to submit their opinions, should they feel the need to speak out.

What’s not fair is holding a grudge for more than a year (or worse, digging for something to be angry about) over a satirical article without speaking to its author and proceeding to publicly shame him in his final weeks of college. Somehow, the honor of being commencement speaker has wickedly been turned into a cowardly attack on Josh’s character.

If Cassie Hays truly believed that Josh should not be chosen for this position, she could have spoken to the selection committee, or Josh, or even JMR. Anonymously posting in the halls and bragging about it in a classroom setting is unbelievably unprofessional, and I’m honestly ashamed to have such a person representing our campus.

To so confidently attack a student she knows nothing about, she is either sensitive enough to be offended about an article bringing light to sexual assault on campus, or she is motivated by other prejudices. When she brought race into the conversation, unprompted by any logical connection to the matter at hand, I couldn’t help but feel that her real anger was directed at Josh for being a white male asked to speak on behalf of the Class of 2019. Josh Wagner may not be the ideal representative based on race or gender (not that any one person could be), but he is a champion for diversity of opinion and expression every day in The Gettysburgian office.

Cassie Hays may believe she is speaking on behalf of marginalized people or victims of sexual assault by attacking Josh, but she’s the one making this into a joke. Josh is not the problem. Sexual assault on this campus is the problem.

Her claims make those who have the right to be upset about campus culture look like what most older alumni would call “snowflakes,” and, as someone who has experienced sexual assault, I ask her to please stop. No one asked for her to defend them.

I do not personally know her or what experiences she has been through in her life, but I do know what she is trying to do to Josh and it’s wrong. If she is actually angry about the article and has had a dartboard with Josh’s face on it for a year waiting for him to get (well-deserved) recognition, then this entire debate should be thrown out anyway because she is vindictive and childish and not fit to teach at this school. Had Josh Wagner trivialized or made light of the issues he is accused of, I would not hesitate to sign whatever petition is going around, but he is not an evil or insensitive person.

I will be extremely disheartened if the school buys into this propaganda and removes him from his position, and I sincerely hope that this witch hunt isn’t the last memory of Gettysburg College that Josh takes with him.

Editor’s Note: Josh Wagner has recused himself as Opinions Editor from all matters related to Commencement. He had no part in reviewing or editing this article, and editorial control was exercised by Benjamin Pontz, Editor-in-Chief. Anyone who wishes to submit an opinion piece on this topic is welcome to do so by sending it to editors@gettysburgian.com. (-B. Pontz)