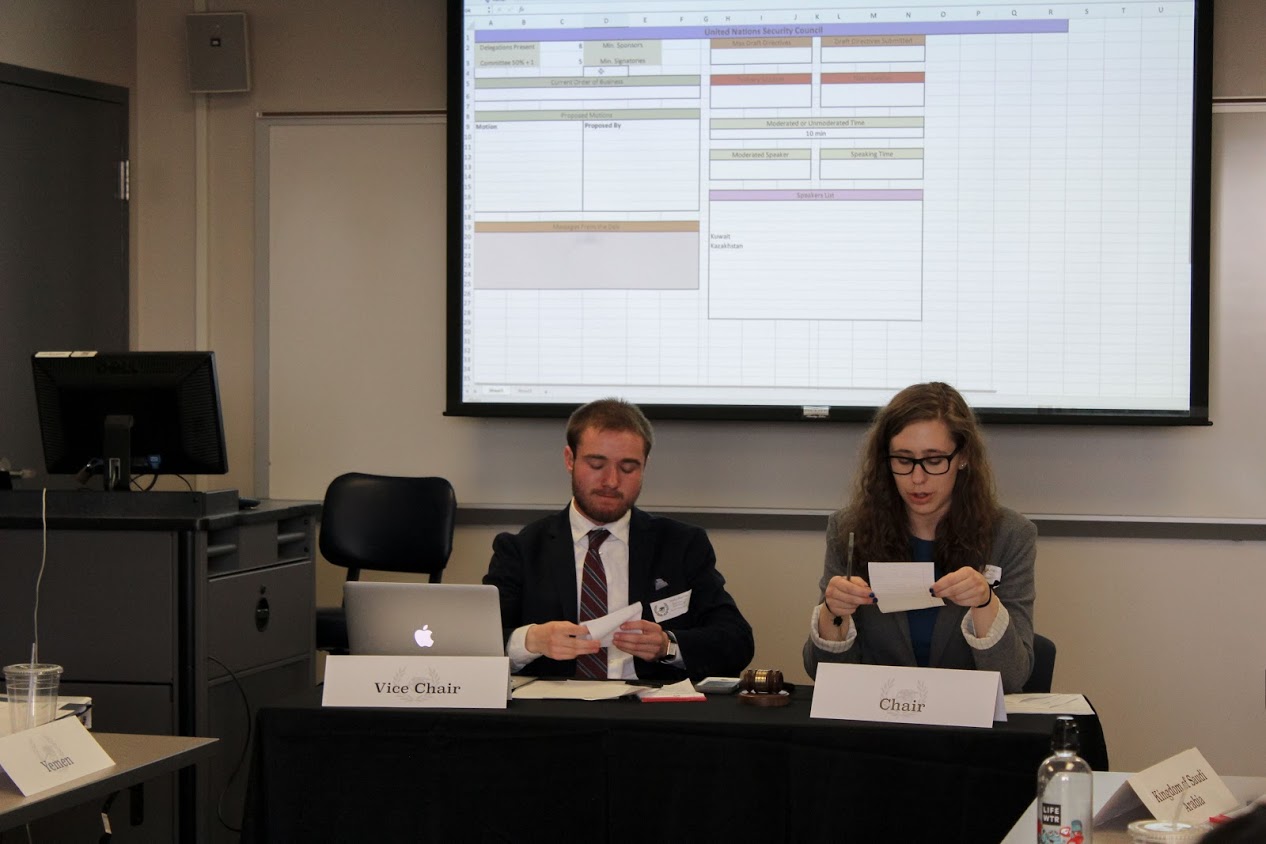 Gettysburg College hosted the second annual GettMUN Model UN Conference on Saturday, April 6 to debate on crises and learn how to interact like and compromise like nations with students from other colleges.

Model UN is a simulation of United Nations structures and bodies debating on topics used in real UN conferences by real life diplomats around the world. 27 delegates attended the event in the flag-adorned Science Center, each representing a different country and defending their respective nation’s beliefs on the topic at hand.

Lauren Browning ‘22, one of the chairs at the conference cited the key aspects of Model UN as “problem solving, persuasion, real world experience and overall cooperation.” Further, GettMUN II was a valuable simulation of United Nations conferences: “The debate that occurred on Saturday–and at all good MUN conferences–imitates, even betters, the real United Nations and the critical discussions of the nagging problems their committees address.”

Delegates debated in General Assembly on the Protection of Civilian Medical and Humanitarian Personnel in Combat Areas. Led this year by Secretary Generals Jack Lashendock ‘20, Alison Lashendock ‘20, and Alexandros Economou ‘22, GettMUN was introduced at Gettysburg in 2017 by Allison and Jack Lashendock and Marley Dizney Swanson ‘18, experienced participants in Model UN. The first conference was held in spring of 2018; the leadership team has spent the past ten months planning GettMUN II.

Jack Lashendock and his General Secretary team, as well as Matt Fellini ‘22 and Matthew Feldstein ‘21 worked in the backroom during GettMUN II, coming up with crises to throw a bombshell into the conversation, including “breaking news” of 26 Red Cross humanitarian aid workers being kidnapped by a Venezuelan gang. Delegates chose whether or not to discuss the crises, all while debating the General Assembly topic and working towards developing and passing a unified resolution by the end.

Delegates also had the opportunity to pass notes to one another and the members in the backroom. They shared ideas regarding proposals for clauses and ideas to contribute to working papers, and eventually draft resolutions, as well as assent with fellow country’s ideas.

Throughout the day, General Assembly held discussion either in unmoderated or moderated caucus, led by Chairs Giacomo Coppola ‘22 and Browning. Unmoderated caucus consists of unstructured discussion with diplomats mingling around to share opinions and give feedback on responses. Moderated caucus is timed, with the opportunity for countries to give short speeches on their opinions within the topic.

GettMUN was Browning’s first collegiate Model UN conference; she was impressed by the passion of the group on Saturday, “At the collegiate level the body is incredibly engaged and deliberate in developing the resolutions; at this point there is no one here who wants to do MUN only to put it on their resumés and everyone is genuinely interested in acting upon the problem at hand.”

Economou, Secretary-General of Events Outreach was one of the members in the backroom during GettMUN II. A first-year, he previously competed in Model UN during high school and at the All American Conference. He decided to compete on the team at Gettysburg, and after competing, he was promoted to the Secretary-General position.

Model UN has allowed Economou the opportunity to improve his self-confidence and garner new friendships with people from around the world: “Model UN has made me a great public speaker, writer, and researcher. Model UN allowed me to travel to new places like Budapest, Hungary and Warsaw, Poland. Whether they’re from Chicago or Honduras, the friends I have made through Model UN has been something I am beyond blessed with.”

Since founding the conference, Jack and Alison Lashendock have garnered participation from two new schools and interest from other colleges that were unable to attend this year, such as Villanova University and Goucher College. Jack Lashendock even mentioned considering expanding their conference to high school participants in the coming years and holding two simultaneous debates on the high school and college level.

Jack Lashendock commented on the larger interest for GettMUN II, “It is impressive to see our growth, especially into upstate New York and into Maryland and Philadelphia.” He is also hopeful that GettMUN will continue to grow in the coming years, transitioning into a multi-day event to give students more opportunity to address concerns of the global community.

Usually, larger Model UN conferences occur over a time span of up to four days. Some students participate with hundreds of students at larger schools like Yale University, Cornell University, and Florida International University. GettMUN is a smaller scale event that is cost-friendly and conveniently located for neighboring colleges to attend.

Cierra Lane, a student who traveled five hours from SUNY Oswego, represented the Republic of Mali and has been participating in Model UN since high school. She commented on her college’s draw to this event in particular, “Our club has had ups and down, we lost some members so we had to rebuild. For the past two semesters we’ve started coming back and beginning to look at conferences to go to. This was cheap and we could do the distance.”

Student camaraderie was a common thread at Gettysburg’s Model UN event; the conference ended with a closing ceremony and awards with certificates for distinguished speakers to recognize their work. The backroom team also briefly interrupted debate for reflection and feedback about the Chairs and collected a survey at the conclusion of the event to learn how to improve for next time.

Members of GettMUN encourage Gettysburg students to join and begin participating in Model UN conferences, “I believe that Gettysburg College can be one of the best teams in the circuit if we had more students competing. Gettysburg is full of many students who show great potential, and I believe that Model UN is a great way for them to use that potential,” Economou said.