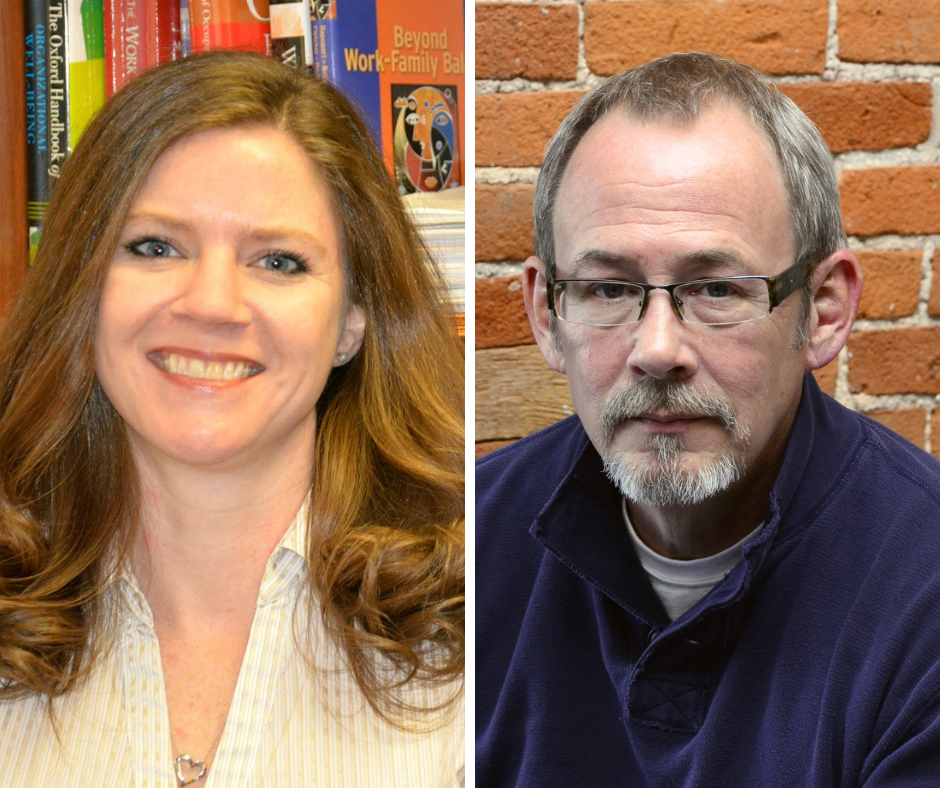 Heather Odle-Dusseau (L) and Bennett Bruce, who presented the proposal on behalf of the Management Department (Photos courtesy of Gettysburg College)

After spending the entirety of its second consecutive meeting discussing the proposal, the Gettysburg College faculty seemed poised for a vote on whether to approve a motion from the Management Department to add a dual major in Business to the college curriculum Thursday afternoon. Instead, the faculty parliamentarian raised a question of procedure and a motion came from the floor to postpone the vote, and the faculty voted 79-58-1 to delay voting until the faculty’s final meeting on May 2, which is typically reserved for valedictories in honor of retiring faculty members.

Professors Heather Odle-Dusseau and Bennett Bruce, Chair and Pre-Business Advisor in the Management Department respectively, opened the meeting by outlining changes to the structure and oversight of the proposed major based on concerns raised at the April 4 faculty meeting. Specifically, the declaration period for the second major would be in the spring of students’ sophomore year rather than the fall, allowing more time for students to determine their first major since the business major applications would require a plan to connect business to the primary major. Additionally, Odle-Dusseau announced that the program would be supported by a Cross-Disciplinary Business Advisory Committee composed of faculty from across the college “to discuss ideas for integrating the dual Business major into other majors,” she said in a subsequent email.

Odle-Dusseau and Bruce also emphasized their argument that this program would be distinctive from what is offered at other colleges in that it contains a “critical action-learning” component that will require students to study abroad, complete an internship, or participate in community service and that the program will embrace critical theory, which Bruce said is uncommon if not unprecedented at the undergraduate level.

“No one does this — that I know of — at the undergraduate level,” Bruce said.

The other primary announcement was that grade point average would not be the sole determining factor in admitting students to the program. Although the original proposal called for a minimum GPA of 3.0, the Academic Program and Policy Committee (APPC) rejected that plan, and Odle-Dusseau said at the meeting that the department would use a more holistic process to assess applications.

“We certainly don’t want to create a system that would benefit some students over others relative to their background or their race or ethnicity, and so we want to be very careful about that,” she said. “Anyone would be able to apply for this program.”

She said that reviewing the rationale students provide for connecting business to their first major and assessing their performance in business-related courses would, in addition to overall grades, weigh heavily in admitting the 60 students annually that the program could serve.

Before opening the floor to discussion, President Janet Morgan Riggs provided a few of her thoughts as president on the proposal, noting that she has heard apprehension from some faculty members that their departments will lose positions to support the hiring of the two new tenure-track faculty members Provost Chris Zappe says the proposed program would require as well as any future expansion.

“It’s not in anyone’s interest to pull lines from departments that need lines,” Riggs said. Zappe will continue to assess enrollment trends and students’ disciplinary interest to allocate tenure-track faculty positions where they are needed, she added.

Riggs also said that she anticipates two potential funding sources for the program: new fundraising, which she said cannot begin in earnest until the faculty approves the concept, and allocating money from the college’s year-end surplus, which is a decision that rests with the Board of Trustees, but that she imagines will be on the table if the proposal is approved by the Board’s May meeting.

Riggs shared that she has heard from some faculty members who feel this proposal had been rushed to the floor, and she said that one reason to proceed now is to give staff two full summers to work on the program before its proposed start in the fall of 2020, noting that if approval is delayed to the fall, the program may not be able to begin until the following year. She then turned to Vice President of Educational and Enrollment Services Barbara Fritze to make the case for moving quickly from a student recruitment perspective.

“From the enrollment team’s perspective, this is absolutely critical for us to compete in a very, very competitive marketplace,” Fritze said, going on to note that “every one of our competitors” has a business program. If the college cannot continue the conversation with families of prospective students potentially interested in studying business, it could hurt enrollment in the longer term as the number of college-going students decreases, she added.

Several members of the faculty including Thompson Professor of Environmental Studies Randy Wilson, Associate Professor of English McKinley Melton, and Graeff Professor of English Literature Suzanne Flynn probed the distinction between Business and the Management Department’s current major in Organization & Management Studies (OMS), including questions as to whether pairing OMS and Business was a pairing of two distinct majors (as Bruce had previously described Management as one of three legs of education in the broader field of Business) or whether OMS should merely be a track or concentration in a broader Business major that could be offered out of the existing department.

Bruce noted that he could make a case that Economics and Business are as closely related as OMS and Business and that, in his view, either would be a worthwhile pairing given the differences in what each field encapsulates.

Flynn, who framed her comments in the context of having spent the previous week in advising appointments with first-year students, said that she worries about the number of requirements and hurdles that double majors place on students at the expense of them pursuing their genuine intellectual interests.

“With this one in particular, my fear is we’re going to get a lot of OMS/Business dual majors or Econ/Business dual majors, and that’s 20 plus courses, and then you throw in the Gettysburg Curriculum courses that are not going to be fulfilled by either of those majors, and you’re up to 26 or 27. And, before you know it, our students are not really getting a liberal arts education. We’re really tying their hands, so that’s my first concern.” she said, elaborating that her objection is not to dual majors themselves, but that they are structured such that they automatically entail taking at least 20 courses.

Particularly in the case of business, which she imagines is a major that parents will pressure their children to take, she said that she worries this proposal will eliminate the possibility for students to pursue passions for fields that have no overlap such as anthropology or philosophy.

Odle-Dusseau responded that the proposal, as designed, is “very intentional” about making connections with other departments in which students may have interests.

Professor and Chair of Economics John Cadigan spoke on behalf of the Faculty Finance Committee, which he also chairs, to state its support for the program based on its potential for increased applications and enrollment, while Professor of Psychology Brian Meier spoke on behalf of APPC to state that his committee voted not to support the major as a committee co-sponsor to the Management Department’s motion based on the proposal that was presented to his committee several weeks ago.

Cadigan added, in response to Flynn, that he finds the notion that studying economics, OMS, or business is not part of a liberal arts education “deeply offensive.”

“The idea that the study of business and economics cannot be done in a way that focuses on interdisciplinary thinking, appropriate communication, the ability to write, the ability to problem solve in a wide variety of contexts — these are skill sets that business leaders have to have, and they’re skills that our students need,” he said.

Andresen noted that the first year is often the hardest for students in the natural sciences (including physics), and he worried that students from underrepresented minorities, who, he said, tend to struggle more early in their academic careers before coming around later on, and who also, he imagines, might generally be more interested in a Business dual major, but would be at a disadvantage in the application process their sophomore year based on those early grades. He also expressed concern that the number of courses in some Bachelor of Science degrees would make it impossible to complete that degree and a Business major along with the Gettysburg Curriculum requirements.

Bruce responded that he has not seen too many students from the natural sciences completing the Business minor, so he is not sure whether to be overly concerned about a large number of students wanting but being unable to complete a second major. Odle-Dusseau again emphasized that the application review would be holistic and take into account some of the factors Andresen mentioned.

Evrard expressed that she felt this proposal had been “rushed” to the floor without enough information about the availability of electives or core courses in departments besides Management, noting that Economics, for example, is chronically understaffed but would be a core course in this new major, and that, although her department proposed a new course that could be an elective in Business, it would probably run only every other year and would accommodate a maximum of eight Business majors at a time, which would not do much to put a dent in the elective requirements of up to 120 Business majors that would need to fill numerous elective requirements.

Odle-Dusseau acknowledged the concerns but said that she was excited that more than 20 proposals for new elective courses came as part of a call for submissions earlier in the semester.

Shortly after 5:00 p.m., the end time for faculty meetings, Riggs sought to hold the vote the Faculty Council had scheduled on the motion, but Parliamentarian Kevin Wilson, Professor of Psychology, questioned whether the changes in the proposal from the last meeting meant that the Management Department had effectively introduced a new motion. Ultimately, he determined that it did not, but, before a vote on the proposal could be held, Randy Wilson moved to postpone the vote until the faculty’s final meeting. The motion passed 79-58 with one abstention.

The only other item on the docket at the meeting was an announcement from Associate Professor and Chair of Mathematics Ben Kennedy that a Presidential Transition Planning Committee charged with helping to acclimate incoming President Robert Iuliano to campus has been convened and includes three faculty members: Kennedy, Associate Professor and Chair of History Scott Hancock, and Professor of Political Science Caroline Hartzell. Iuliano’s inauguration will be a multi-day event in the fall held September 27-30, 2019.

Editor’s Note: This piece was edited on Monday, April 22 at 6:20 p.m to reflect that the advisory committee will not directly oversee the major. (-B. Pontz)