April Fools: Gettysburgian Exclusive: Interviews with the Ghosts of Gettysburg 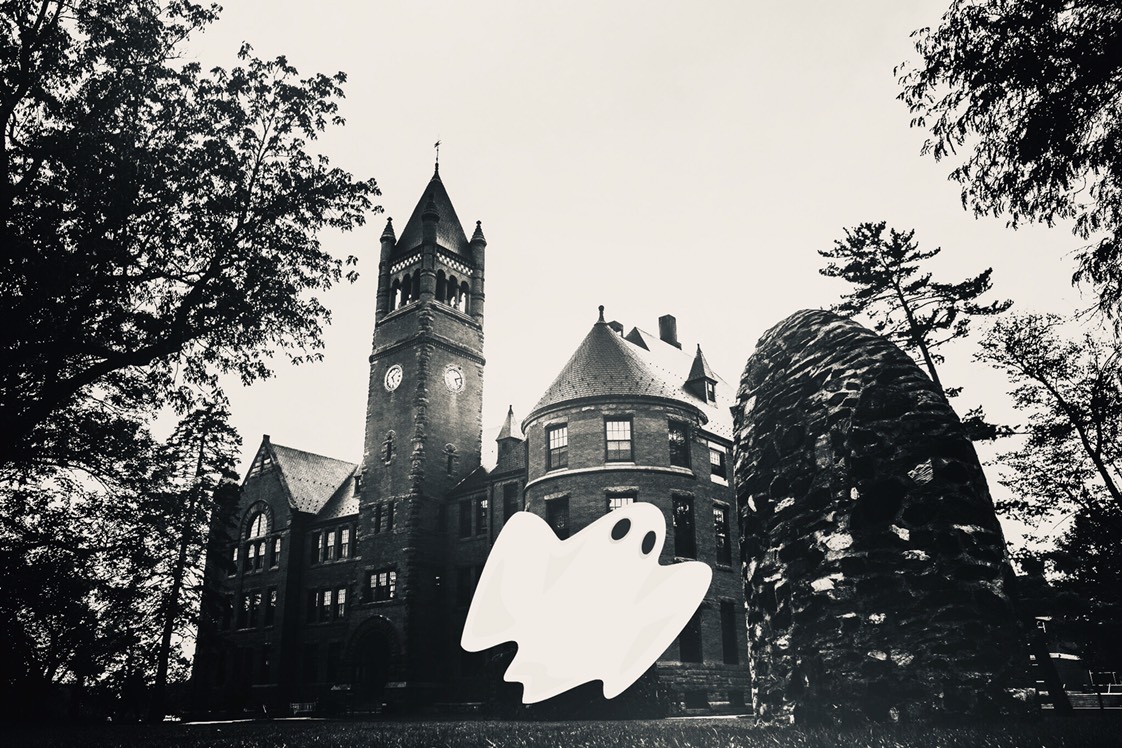 Ghosts haunt the halls of Gettysburg College, but some of these specters are less well-known than others (Photoshop Lizzie Hobbs/The Gettysburgian)

Gettysburg College is frequently referred to as the most haunted college campus in America, and visitors are hard pressed to find a Gettysburg student who hasn’t experienced some sort of paranormal event or lived in a dorm room that is “totally haunted.”

The ghosts of Glatfelter tower, the Chapel basement, and Penn Hall are some of the most frequently talked about ghosts at Gettysburg, but we at The Gettysburgian wanted to get the inside scoop on Ghost Life at Gettysburg from some of the Burg’s lesser-known specters.

Fourth floor Musselman Library: for some a favorite study spot, for other’s a bleak, windowless pit of despair. For one former Gettysburg student, however, the fourth floor of the library will remain her permanent home, as her soul continues to roam the Ultra-Quiet space. Worry not, reader, this poor student has not actually passed on to the afterlife, as she explained in our one-on-one interview.

“I just spend so much time in the library… and so much time on the fourth floor…,” she said between large gulps of iced coffee. “Between research in Special Collections, and working up here so I don’t get distracted, it’s really no wonder part of my soul died and is stuck up here.”

This clearly overworked spirit can be spotted in the very back corner of the fourth floor, sifting through stacks of notes, crying over sad study music, and consuming copious amounts of caffeinated beverages to keep herself from falling asleep while speed-reading for the next day’s classes.

“The fourth floor is normally, like… fine,” she mused,  “but this time of year people get pretty hostile. I accidentally dropped my water bottle up here the other day and an entire table of Psych majors looked at me like they were gonna rip my head off. Come on, people, I’m a ghost. You’re getting mad at a ghost. Psycho-analyze that.”

One of the areas most heavily populated by ghosts, but rarely acknowledged by the students of Gettysburg, is the Jaeger Center. Dozens of lost spirits float between the treadmills and weight machines, abandoned after students have realized that their New Year’s Resolution to work out more doesn’t fit their schedule this semester.

One of these lost souls commented saying, “You know, I was doing so well the first 2 weeks of this semester. But then I had a paper due. And the next week I got sick. And then I had another paper due. The stars were clearly not aligned for these workouts.”

Another spoke up, adding, “I went running every other day for 3 weeks, and then I saw 3 of my professors here in the course of a week… that’s enough to haunt anyone.”

Remember the fates of these poor poltergeists as we all inevitably go back on our resolutions again next year.

Many members of Gettysburg College, from Senate to Greek Life, consider themselves to be haunted by The Gettysburgian on a weekly basis. But we thought we’d dive into the depths of Gettysburg’s haunted side and see if there was any truth to this.

The smell of slightly burnt coffee intertwined with that of dusty stacks of hundreds of old copies of the paper. The faint, phantom-like sounds of fingers frantically hitting computer keys could be heard throughout the room.

“I can’t deal with another news article about a Senate scandal no one cares about. I physically cannot bring myself to do it,” the ghost lamented. “The past three professors I was supposed to interview for faculty spotlights have cancelled on me. I’m starting to think they have something to hide.”

We tried to console this disturbed ghoul but found that nothing could drag him out of the depths of his despair.

“I spent so much time copyediting during the last print week,” he said. “I think I literally died trying to go through and find every misplaced comma. This is where the American public education system has really failed us. Grammar. Nobody knows when to use a colon or a comma, and don’t even get me started on a semi-colon. Quotation marks? I don’t think a single teacher has ever taught those to their students. They can’t have or–”

It was at this time that the ghost rose from the floor and began frantically pacing the length of the office, continuing his rant. Coincidentally, this is also the time our interviewers inconspicuously made their departure from the office.