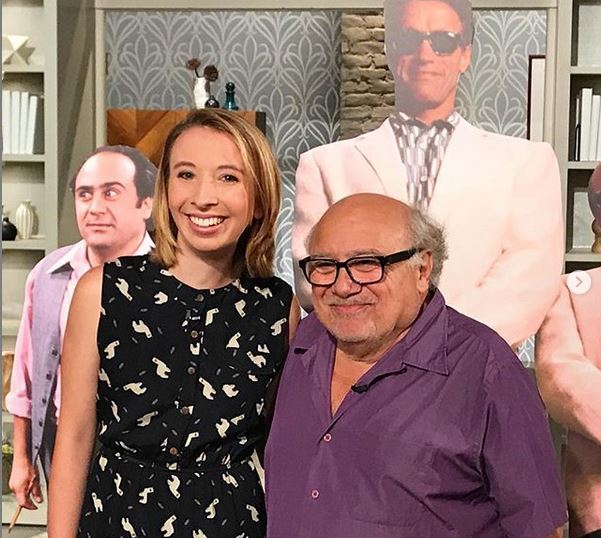 Closs appeared on daytime TV show The Talk, on which she met the flesh-and-blood Danny DeVito (Photo courtesy of Allison Closs)

Allison Closs ‘22, also known as the “Danny DeVito Prom Girl,” experienced a new development in her months-long association with the It’s Always Sunny in Philadelphia actor when, during an interview with DeVito on March 11, late-night talk show host Jimmy Kimmel held up one of the now-famous photos of Closs and her cardboard cut-out DeVito prom date.

“I had a lot of trouble getting a date,” said Closs, explaining what prompted her to take a lifesize cardboard cut-out of DeVito to her high school senior prom in May 2018.

During her sophomore year, she had an awful experience with a flesh-and-blood date who turned out to be quite rude. After spending some time searching for a new date for senior prom, Closs thought, “Why don’t I just take a cardboard Danny DeVito?” 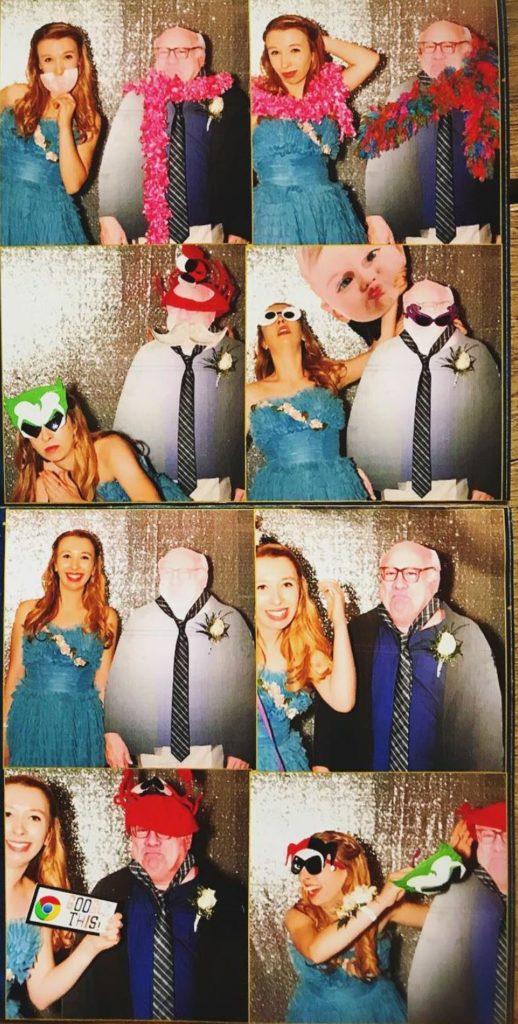 Contrary to popular opinion, Closs’s love for DeVito was not her primary motivation for choosing her unconventional date.

“People always characterize me, when they do stories about this, as ‘She was this super-fan of Sunny,’” said Closs, referring to DeVito’s TV show, It’s Always Sunny in Philadelphia, “And, at the time, I had only seen two episodes. I’ve watched all of them now, of course.”

Closs, who explained that she has a reputation for breaking the status quo and pulling wacky stunts, wanted to make her classmates laugh and to challenge the “gotta get a date, gotta get a date” concept of high school proms.

Before the dance, her parents were skeptical but supportive of her idea. Her friends reacted similarly, although they seemed more hesitant to believe she would follow through.

Arriving at the prom with “Cardboard Danny” dressed in a tie and boutonnière and pulled along on a scooter by a leash, Closs turned heads and unintentionally began a viral phenomenon.

PennLive and other local journalists, who were present to cover the prom, photographed Closs and her date. From there, local news, with the consent of Closs, passed the story to The Associated Press, which again requested Closs’s permission to publish.

“A lot of people think that it just happened overnight and that I got kinda blindsided,” reflected Closs. “Like, ‘I go to the dance with Danny DeVito and the next day I’m on The Talk.’ But the whole time, they asked permission… Each step there was a choice.”

Once the story ran, it spread like wildfire. To name a few, The New York Post, E! News, Vice, and Time magazine have all covered Closs’s story. She even went international, appearing in an article published by the BBC.

In June, Rob McElhenney, a co-star of DeVito’s on It’s Always Sunny in Philadelphia, tweeted at Closs: “Hey Allison – I heard you took cardboard Danny to Prom. What a coincidence. He took cardboard Allison to Paddy’s…” Attached to the tweet was a photo of a cardboard cut-out of Closs standing next to a very real Danny DeVito on the Paddy’s Pub set of his TV show.

McElhenney was not the only person to reach out to Closs via social media about her much older prom date.

“A big part of the story is that I’m single,” Closs said. “So you get a lot of guys trying to hit up my DM’s…I’m not bothered by it. I just think it’s funny.”

Some of the attention that Closs has gotten has been less flattering, but their comments do not faze her.

“People try to roast my appearance. I’m not offended. I think it’s hilarious…It’s like looking at yourself from a different perspective,” she reflected.

A summer of making news headlines led to Closs’s first in-person appearance on daytime TV show The Talk in September.

Closs remembered being in Spanish class at Gettysburg College on a Wednesday when her mom called her with the news. The Talk producers wanted to fly her out to Los Angeles on Sunday, film the show on Monday afternoon, and fly her back to Pennsylvania on Monday night.

According to Closs, the producers told her the show was covering the top viral memes of the summer. Immediately, Closs was suspicious that the producers withheld their true intentions.

She recalled texting her group chat for the Gettysburg College marching band drumline: “I said, ‘Hey, so I can’t get to practice because I’m going to be in L.A. filming an episode of The Talk.’ The best response was from our section leader. He said, ‘That is the fakest sounding true statement I’ve ever heard.’”

After interviewing Closs on the show, The Talk hosts gifted her with “a Danny DeVito for every occasion,” or multiple cut-outs of DeVito from his different acting roles. Closs refers to these cut-outs as “Matilda Danny,” from DeVito’s film, Matilda; “Spooky Danny,” from DeVito’s role as the Penguin in Batman Returns; “Twins Danny,” which also includes a cut-out of Arnold Schwarzenegger, from their film Twins; and “Taxi Danny,” from DeVito’s sitcom Taxi. These now accompany her original “Classic Danny.”

On the talk show, Closs soon found that her earlier suspicions were well-founded. After being introduced to four cardboard DeVitos, she met the man himself. They hugged and took some photos together but talked for only a short time afterwards.

“I think he could tell that I was in a state of shock,” she said, “and he didn’t ask a whole lot of questions because I kind of forgot how to make words happen. I regret that so much. I wish we could’ve said more.”

Although she enjoyed meeting DeVito, Closs was especially grateful to meet DeVito’s agent after the show. The woman gave Closs her business card, and Closs, an aspiring director, was quick to follow up with an email, asking if DeVito had any summer projects that she could join.

Currently in talks with DeVito’s agent, Closs hopes that she will spend the summer working on the set of It’s Always Sunny in Philadelphia.

At Gettysburg College, Closs is pursuing a double major in Cinema and Media Studies and Video Production, an individualized study program. Currently, she is enrolled in Video Production, World Cinema History, Japanese Cinema, and Spanish 202 — the last one “because I have to.”

“Sometimes it feels like a class,” she reflected about her video and cinema courses, “but most of the time, it’s just like a club that you get grades for. I genuinely love what I do, and I look forward to that sort of stuff. If I’m sick and miss a class, I’m devastated. I’m like, ‘Oh my god, I can’t believe I missed out hour-long discussion of Seven Samurai from 1954.’”

Closs is most interested in comedic films, though she has some qualms about the way the public often receives them: “Everyone loves comedy, but nobody really respects it. All the best picture wins at the Oscars, they’re always dramas.”

According to Closs, not enough people realize the effort that occurs behind the scenes in the editing and writing of comedies.

Closs also appreciates films that take risks. She would love to work on a Wes Anderson or Quentin Tarantino film. Tarantino “definitely allows for experimentation, doing things outside the norm,” according to Closs.

Whenever she gets the opportunity, Closs tries to further her career in the film industry. On campus, she works on GburgTV, which is undergoing a reboot. At the moment, Closs is writing for shows that will air next semester. Her ongoing project is “Gettysburg Ghosthunters,” a parody of ghost-hunting TV shows.

Closs’s advisor for GburgTV and professor for Video Production, Jeff Williams, has made a deep impact on her. She appreciates his support of her aspirations and enjoys seeing him almost every day.

For Closs, the attention that she has received over the past months has given her a feeling of validation, both in terms of her film industry dream and her own self-confidence.

Closs, who admitted that she was not very popular in high school, explained, “I feel like sometimes it comes off like I’m bragging about this sort of thing, but it genuinely makes me feel really good when I hear, ‘Yeah, Allison, you’re weird in a good way.’ And I think, ‘Thanks, I really needed that today.’”

As she navigates the positives and negatives that come with her newfound fame, Closs always has her Danny DeVito cut-out as her “guiding light” — literally, since she has a spotlight on him where he stands in the window of her second-floor Stine Hall dorm room.

Meeting DeVito in person was a surreal experience for Closs, and her unreal encounters do not seem to be stopping anytime soon. Nearly a year after taking DeVito to the prom, Jimmy Kimmel showed Closs’s photo on his late-night show last week.

On her Instagram, Closs encouraged Kimmel to invite her to come on the show next time. She also thinks it would be incredible to appear on The Ellen Degeneres Show or Last Week Tonight with John Oliver.

Recently, The Jonathan Ross Show, a British comedy talk show, asked Closs for her permission to use her photos on an upcoming episode.

Closs marveled at the way public interest fluctuates: “The story can just blow up so many times. It blows up, and then it’s calm again.”

Whether or not her name is in the headlines, Closs works constantly at achieving her dream of becoming a director and at appreciating herself as “weird in a good way.” Of course, it helps to have Danny DeVito — real or  cardboard — by her side.