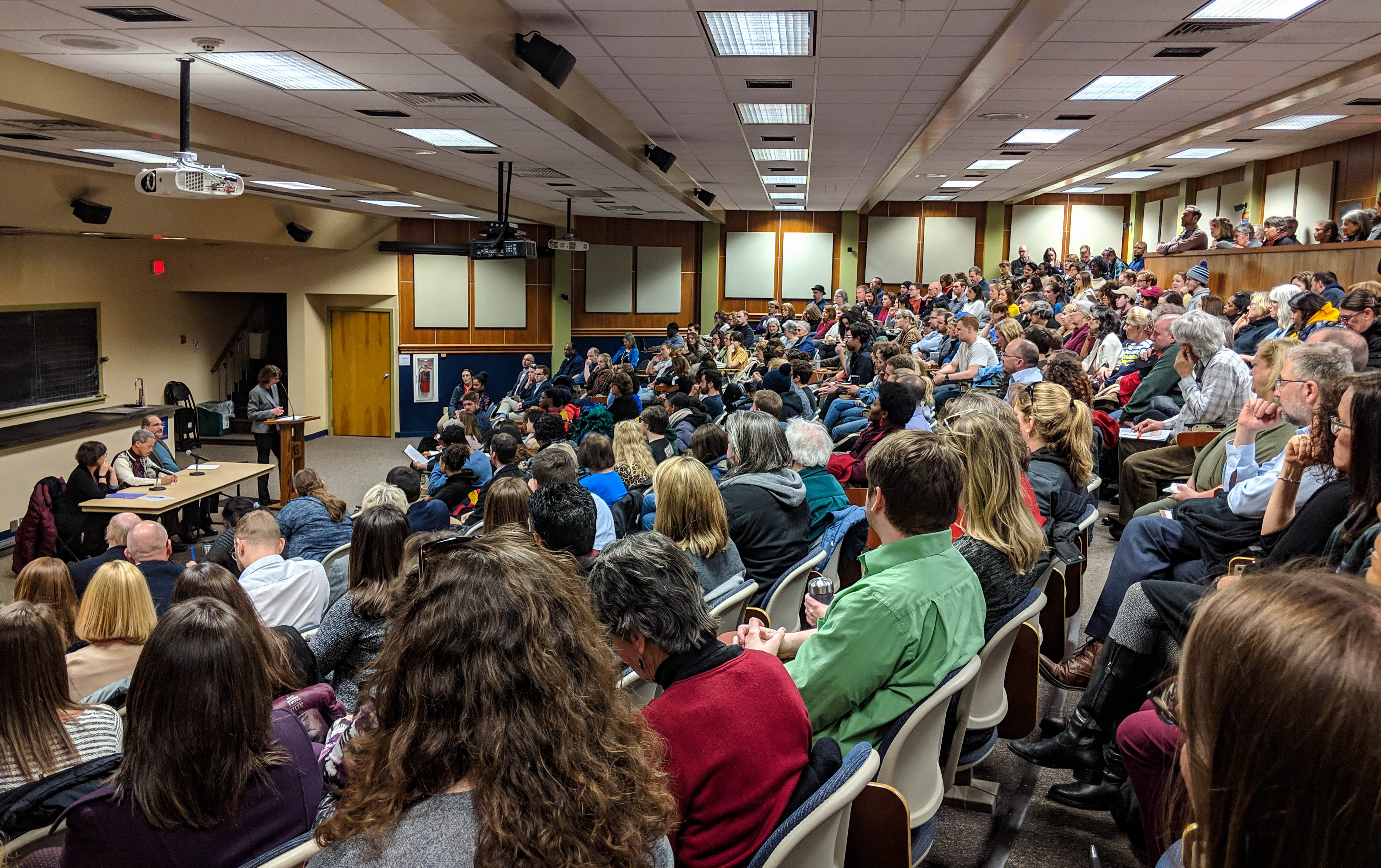 “I think the further we go, the more layers of complexity emerge, and the more we’re learning about our campus today.”

This was President Janet Morgan Riggs’ preliminary takeaway from an hour-long conversation in which numerous students shared raw, impassioned statements about their experiences as members of the Gettysburg College community. In an interview directly following the event, Riggs said that she needed time for further reflection before she could determine what the college’s next step would be.

More than 300 students, faculty, and staff members answered Riggs’ invitation to join in dialogue, and they filled Mara Auditorium well beyond its seated capacity Thursday morning. About 20 more watched a live stream in an adjacent room as members of the campus community discussed moving forward after a photo of Bob Garthwait in the 1980 edition of the college’s yearbook came to light, leading to his swift resignation from the Board of Trustees.

Riggs opened the conversation by stating that she had received more than 300 messages about the issue, many of which were personally disparaging or rested on misconceptions about what had happened, but that the most thoughtful conversations in which she had participated came on campus, which gave her confidence that the ensuing discourse would be fruitful.

Gimbel, who teaches a course on the philosophy of humor, began his remarks with a caution against suppressing one’s feelings to join a false consensus for the sake of community, and then he proceeded to discuss a scene from Mel Brooks’ musical comedy The Producers as evidence that it is possible, in his view, to dress up like Nazis as part of a legitimate joke. In the scene, dancers dressed as Nazi officers and marched in the shape of a swastika. He described it as “uproariously funny” and asserted it was “one of the most important scenes in Jewish cinematic history” because of “what that joke meant … to look Hitler right in the eye and say, ‘You tried to kill us. We’re still here. We’re mocking you.'”

From there, Gimbel questioned what the joke from the Hogan’s Heroes fraternity party in 1979 meant and offered that answering that question requires ascertaining the context of who made the joke, to whom they made it, and what they meant by it. By way of that context, he asserted that, at Gettysburg, the Hebrew language is not offered, the faculty rejected adding a Judaic studies program three times before finally doing so after a donor came forward to fund it, and there have not been any Jewish administrators in the academic division in his 25 years at the college.

“I’m not saying our community is overtly anti-Semitic, but these examples — and there are others — speak to the erasure of Judaism,” he said. “It speaks to why so many Jews at Gettysburg know that they are not fully part of the community … and it is from this place of alienation that we make meaning of this photograph.”

More important than Bob Garthwait, Gimbel argued, is the community’s posture towards Judaism.

Hancock then asserted his belief, which he discussed before the event with members of the Black Student Union, that this photo represents only one piece of a history that includes several photos of students wearing blackface in other editions of the yearbook as well as numerous parties and events that have not been documented in such official ways. Taken in tandem, these elements suggest to Hancock that the college has been complicit in propagating systemic racism and bigotry for decades before and in the decades since the photo.

Hancock closed by asserting the need for what he called “restorative justice,” suggesting that individuals like Garthwait should donate their time and money towards work that is “explicitly anti-racist.”

“Instead of worrying about the possible harm to Gettysburg’s reputation,” he said, “let’s see this as an opportunity. Let’s see the Garthwait Center — or whatever it may be called in the future — develop and implement an explicitly anti-racist campaign that is not just about heightening awareness but also figures out how to make a material difference in dismantling whiteness and creating real opportunities for equity.”

He suggested that fully funding an institute for peace and justice studies might be one step in that direction.

Lowy, the final panelist, shared her reactions to the past week’s events, specifically towards the initial announcement of the photo and Garthwait’s resignation.

“I felt the resignation was quick and possibly unnecessary. I felt that I was being told, as a Jew, that I should be outraged by the photo. Instead, I felt uncomfortable judging a person I did not know by one 39-year old photo taken at a fraternity party. I felt that I wanted more information,” she said. “As a Jew, I worried that this attempt to address anti-Semitism would instead backfire, that Jews would be blamed for overreacting, for being too sensitive, for bringing down a good man. And, sadly, I was right to worry.”

She asked that people react to the circumstances at hand with intelligence and compassion and to lean into conversations that make them uncomfortable.

Dean of Students Julie Ramsey, who moderated the conversation, then invited participation from those gathered. In all, nine students and one professor spoke, and comments probed both how the campus should respond to this particular situation as well as, more broadly, the daily experience of minority groups on campus.

Anna Perry ’21, a transgender student, said that people from marginalized groups are tired of expending free labor educating other people about how to acknowledge their humanity.

“We’re all so tired of accommodating white men, and I have had to do that since the very first day I came here,” Perry said. “The expectation is that I learn how to deal with them rather than they learn how to be human beings. I’m just sick of that, and I know a lot of people in this room are.”

Angelique Acevedo ’19 asked that the college consider how to better integrate peace and justice studies across the college curriculum.

“Gettysburg College claims that they want to make a diverse and inclusive environment,” she said, “and I believe that it would be best done through studying peace and justice.”

Responding both to Hancock and Acevedo, Riggs said after the event she is interested in hearing more about either expanding peace and justice studies as a program or better integrating it across the college, but she noted that the curriculum is ultimately in the hands of the faculty such that efforts would need to start there.

The next several minutes of dialogue centered on how the college should approach the Garthwait photo in particular and how the conversation likely would have been different if it had not been a prominent alumnus and donor in the photo.

Hassan Williams ‘22 described the incident as “a pause” for himself.

The final student to speak was Jordan Knox ’21, who noted that her parents taught her from a young age that what she did reflected not only on her, but on her family and on black people as a whole.

“Something that is really frustrating me about this situation is that this person gets to be seen as an individual who has made an individual mistake, but, as a person of color in this country, anything that I do, no matter how small, could change — ruin — my entire life. I don’t get to be an individual. I have to represent all the other black people who look like me and who live on this planet and live on this campus,” she said. “I think it’s frustrating that he gets to be an individual and he gets to make mistakes, and we have to feel bad for him. I’m so sorry that maybe his life is going to change now and people are going to view him negatively.”

She went on to discuss how, as an African-American woman at a majority-white college, she is always aware of the way she presents and conducts herself.

“I think that you need to think about what you do. For some people on this campus, that reality is just so much more real. If you’re a person of color, you’re very aware of what you do,” she said. “The first step you need to take is to realize that what you do affects people, it hurts people, it touches people. You don’t just represent yourself; you represent everybody.”

College chaplain and Associate Dean of Religious & Spiritual Life Dr. Kristin Largen closed the event by encouraging everyone to continue to engage in challenging conversations and to intentionally listen to others.

She drew on the writing of Dietrich Bonhoeffer, a Lutheran pastor in Nazi Germany who was hanged after participating in a plot to kill Adolf Hitler, who argued that attending to the inclusion of the marginalized and vulnerable members of a community can be an antidote the self-absorption that can come from being in a majority.

“The beginning of showing love for others is listening to them,” Largen quoted Bonhoeffer as saying.

As a final benediction, Largen implored those present to continue the conversation.