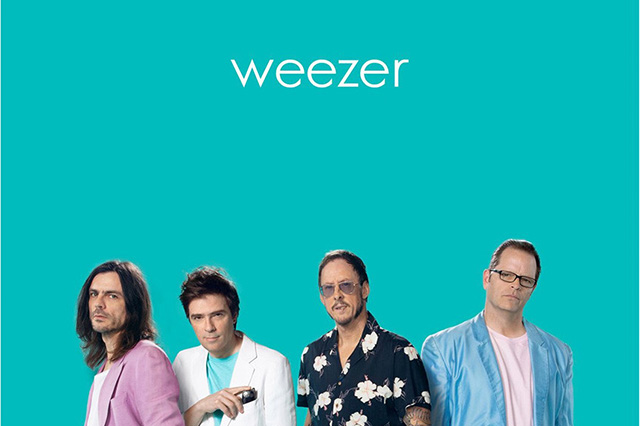 I think most people, including Weezer fans, would agree that Weezer peaked with the Blue album and Pinkerton all the way back in the late nineties. For two decades, dedicated fans have stuck with the group through thick and thin, as if Rivers Cuomo and Weezer would eventually triumph and make a big comeback. In 2018, Weezer finally made a breakthrough with a cover of Toto’s “Africa,” which went viral and became their highest charting song on the Billboard Hot 100 since 2009. “Africa” played non-stop on the radio that summer; the band performed it live on Jimmy Kimmel, released a music video for the song featuring “Weird Al,” and kicked off 2019 by performing it on Dick Clark’s New Year’s Rockin’ Eve.

Considering the success of “Africa,” I wasn’t too surprised when the Teal album suddenly dropped on January 24th. An album consisting entirely of covers of popular songs makes too much sense for the group. The now-famous “Africa” is joined by covers of A-ha’s “Take On Me,” Black Sabbath’s “Paranoid,” Michael Jackson’s “Billie Jean,” and Electric Light Orchestra’s “Mr. Blue Sky” (as made famous last year by Guardians of the Galaxy Vol. 2). The tracklist panders to the lowest common denominator with songs that both millennials and their parents can sing along to. There’s nothing on Teal that stands out as particularly awful or offensive, the problem with Teal is that its viciously unremarkable in just about every way.

The songs on Teal are serviceable, but never unique or memorable. Instead, everything is painfully average and boring. Take “Paranoid” for instance; it’s a faithful straight-forward cover of the original song, but that’s the issue. Weezer doesn’t attempt to reinterpret or put any spin on these songs. There’s no reason why I wouldn’t just listen to the original instead.

The greatest covers bring something new and notable to a familiar song. Despite being based on existing songs, they require a lot of creativity. Only a few months ago, Ty Segall released his own covers album, Fudge Sandwich. Love it or hate it, listen to his cover of “Isolation” by John Lennon and try to deny that he made the song his own. In comparison, Weezer’s Teal feels so sterile and safe that it’s almost as if it was formulated by a board of directors in an office trying to figure out the equation for a sure hit.

Still, I will give credit where it’s due. “Stand By Me” is notable for being the only track on this album that feels like more than the absolute minimum amount of effort went into it. The combination of retro synthesizers and electric guitar power chords in the chorus make the tune feel like it came from an alternate universe where Ben E. King was a glam rocker. It’s easily recognizable, but for a song that has been covered by the likes of John Lennon and Florence + The Machine, Weezer manages to carve out its own little space here with their version. I wish there were more covers like this, but for the most part, the entire album feels as predictable as painting by numbers.

At the end of the day, Weezer’s Teal album is only a short footnote in the long discography of Weezer; definitely not their best work but probably not their worst either. Destined to be forgotten like their Christmas album, it really only exists as a little side project to hold people over until the somewhat anticipated Black album comes out in March. So why am I even taking time to write about this and share my thoughts? There’s just something off-putting about the fact that a major band like Weezer, who once felt like the voice of a generation, has devolved into releasing lazy covers in an obvious attempt to cash in on nostalgia. Whether or not this album is designed to be taken seriously, I can’t help but feel disappointed that Weezer is regurgitating songs they know we already love and expecting us to lap it up. For a more wholesome alternative, attend a gig by your local dad band. They’re basically playing the same music anyway and it’s a great way to thank them for coaching your soccer practices back in the day.