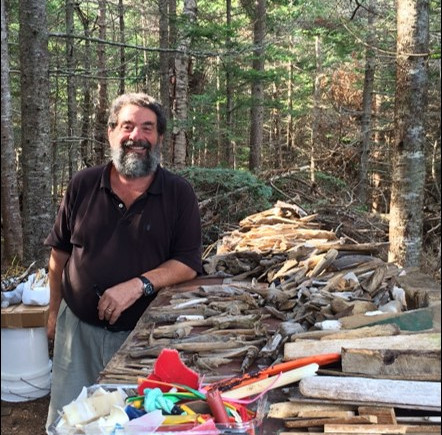 Professor Emeritus of Environmental Studies, John Commito, presented his artwork through a lecture entitled “Trash and Treasure: Sculptures from Found Objects” in Musselman Library on Tuesday, February 26th. In attendance were multiple friends of Commito – such as his “trash” searching partner – and other scholars in the fields of biology and environmental science. Before his retirement, Professor Commito acquired a long list of accolades, ranging from winning the award for Pennsylvania Professor of the Year, the Student Senate Faculty Appreciation Award, the Order of Omega Outstanding Natural Science Professor Award, the Most Outstanding Faculty Member Award, and the Gettysburg College Distinguished Teaching Award. Since his retirement, he has focused on his scholarly work, and more importantly, his sculptures.

As a marine biologist and ecologist, Commito finds most of his resources for his artwork on the Gulf of Maine and his home in Frederick, Maryland. He enjoys creating works that are frozen portraits in time, and uses items such as a PVC pipe, a part of a microwave, a safety, whistle, break pad, and anything else he finds on the streets and beaches. He promotes the intersection of the fields of art and science and does not think that there needs to be a separation between the two specialties. “While artists make patterns, field ecologists analyze patterns,” the Professor Emeritus stated during his lecture. In order to support his idea that art and science can work together, Commito referenced Roald Hoffman and Vladimir Nabokov, among other famous figures from whom he has found inspiration. Roald Hoffman, a poet, playwright, and chemist, is known for wanting unity between creative work in science and in the humanities and arts.

He also mentioned cognitive dissonance, or the notion of incomplete tasks that we tend to remember. Commito has found a deep connection to this, calling himself a completionist who feels dissonance if he does not finish what he starts. The biologist and ecologist completes his research utilizing a Cartesian coordinate system with x- and y-axes. Additionally, he ensures accurate data via a random number generator. He studies numerous living things, most notably clams and worms. Humorously, the lecturer pointed out that there is nothing more boring than organizing one’s data on a spreadsheet. Yet, he maintains the process of collecting, organizing, and creating.

The process of creating sculptures, for John Commito, is not as beautiful as many believe. He picks trash up off the streets of Frederick and the sand of Maine, later organizing them in his basement studio with a tiny window. When he works outside, he does so with an old shed door and plywood on top of “predator cue arenas” or buckets. He considers size, shape, color, material, condition of his objects, and the original purpose of his collected materials as he organizes them into their respective sections. He jokingly commented that when searching for your own sculpture pieces, one should avoid syringes, tampon inserters, condoms, and petrified dog poop.

Unlike Aurora Robson, an artist who creates magnificent sculptures that resemble aquatic creatures, the retired Environmental Studies Department creator tries not to cut or shape his materials in any way. If he does adapt them, he lightly coats them with a white-like paint. This makes his sculptures appear similar to bleached shells on the beach. His works vary, though all include “box” in the title. “Knot Box” is made of tree knots that were shaped and smoothed by forces of nature. “Circle Box” is made out of a fruit box from a bushel basket, put into a cruciform shape. Most of his boxes use driftwood pieces that are cut at an angle. Each of his works takes him about a year to make, thus he must populate the Historic District in Frederick and antique stores wherein he can find boxes for two dollars or fewer.

Reflecting on his life, John Commito shared that his whole life has been the water. He was so infatuated with his “Ripple Box” sculpture because he spent many occasions throwing stones into water in order to see the ripples. If you haven’t thrown rocks, then you are “a very sad person,” according to the Emeritus Professor. It is not something you can do on a screen, but it is something that will make time away from a screen worth it.

The exhibit is on display at Musselman Library through June.