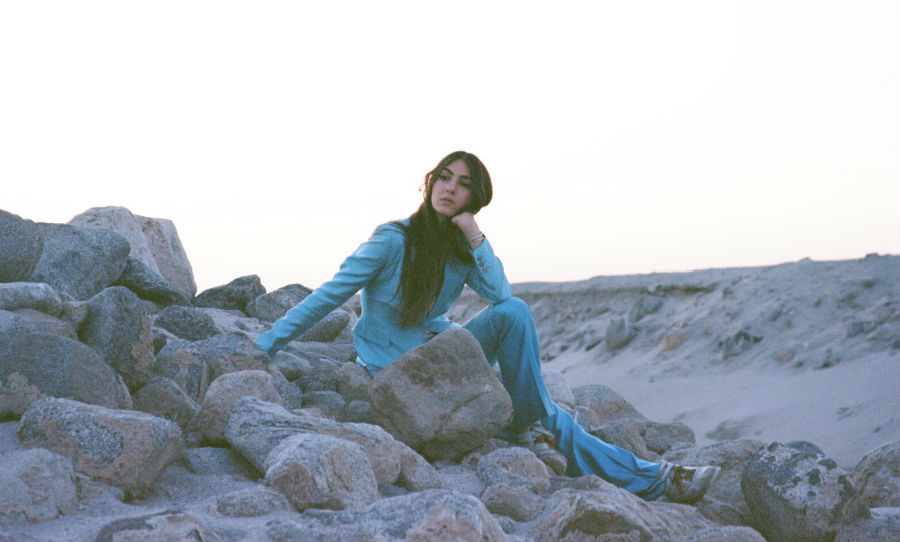 The lush orchestration of baroque pop is probably not the first thing that comes to mind when one thinks of scoring an eighties slasher film, but it’s a welcome surprise in the music video for Weyes (pronounced “wise”) Blood’s new song, “Everyday.” The track, which is from Natalie Mering’s upcoming album, Titanic Rising, was produced by Jonathan Rado. He has worked on albums with some of the biggest indie rock musicians, including Father John Misty, the Lemon Twigs, and Alex Cameron; and it shows.

The arrangements are dense and beautiful, filled with layers of strings, keyboard, and vocal harmonies. The song begins with piano and keyboard before the wonderful other-worldly singing of Natalie Mering begins. The refrains escalate the complexity of the arrangement slightly, but it is the chorus that really showcases the whole range of instruments. A joyful declaration of love and desire, the chorus is punctuated with sunny back-up vocals (provided by the D’Addario brothers aka the Lemon Twigs) and the full orchestra. The whole song goes off the rails during the outro, where the strings relentlessly repeat the same rhythm over and over again and the dissonances become unyielding, creating an atmosphere of confusion and excitement. By the end, I felt as if I had been picked up and whirled around until dizzy.

The music video, which is directed by Mering herself, showcases an awareness of the genre conventions of the slasher. Stop me if this sounds familiar: a group of careless young people travel to a remote cabin where they proceed to drink and smoke and make out. Then a killer picks them off one by one. The video is a clear homage to the classic Friday the 13th films, especially the first movie. This is evidenced by manner in which the characters are taken out by a mysterious figure wielding an axe and the end in which a shot of the full moon is interrupted by a glass-shattering effect as red text appears. It may be derivative, but the atmosphere captured in the video feels just right and very authentic to the original slashers; most importantly, it’s fun. In a way, it boils the slasher down to its bare essentials, eschewing the bad dialogue and cheesy character development, so that we can get to the heart of the slasher movie: the kills. Most plot points in a slasher movie exist only to propel the audience from one thrill to the next like a rollercoaster, and this music video gets that right with its barebones narrative.

Still, there is a lot of style here. In particular, the use of color is excellent. The costuming of the characters is bright and vibrant, and colored lighting is used to a great effect. From the eerie green light that the characters pass through at the entrance of the cabin to the bright red lipstick that matches the blood on one victim’s face, the video avoids the drab grays and blues that plague modern horror movies. The use of a handheld camera at the end compliments the hectic conclusion of the song very nicely, and the sudden slow motion at the end as the medium-close up of Mering’s face fades to the moon in the sky feels like a fittingly creepy conclusion to the video.

What is significant about this music video? It’s an undisguised love letter to the eighties slasher, which in itself does not make it special or unique. What makes it so enjoyable for me, is that it succeeds in capturing the charm of what made those movies so fun. They were silly and cheap and made with a teenage audience in mind. Friday the 13th has had countless sequels and been remade multiple times with large budgets, but none of the recent attempts to recapture the spirit of the originals has ever come as close as this music video. This, in combination with the creative choice to match the video with a seemingly incongruent style of music, makes this a music video that I can watch over and over again without getting bored.