‘Completely Out of Context’: Alumni Recall Party Where Garthwait Photo Was Taken 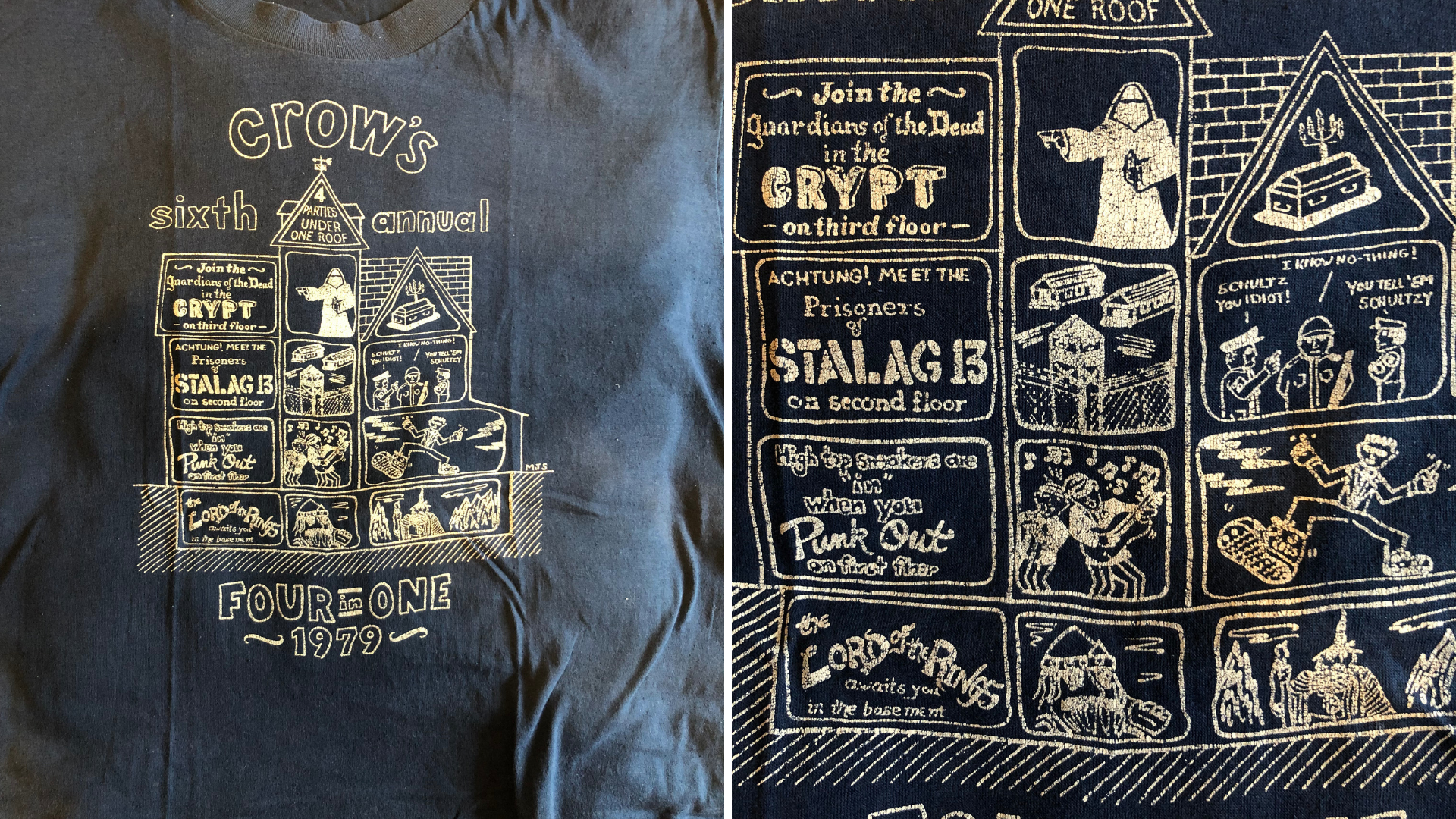 The now ubiquitous photo of former college trustee Bob Garthwait ’82 wearing a Nazi uniform was taken at a 1979 party held at the Alpha Chi Rho fraternity, an alumnus who provided a photo of the party’s official t-shirt said Thursday.

Dr. Albert Fedalei ’80, who was a member of Alpha Chi Rho, said that the photo was taken at his fraternity’s sixth annual “Four in One” party, in which each floor of the house hosted a simultaneous party with a different theme. That year, the themes were “Lord of the Rings,” “guardians of the dead,” punk rock, and the now well-known Stalag 13 “Hogan’s Heroes” theme in which Garthwait participated.

Fedalei said that the fraternity had Jewish brothers who were “fully supportive” and that “Hogan’s Heroes” was recognized as being “actually very anti-Nazi.”

“This whole affair is disgusting to me,” he said. “[This had] nothing to do with religious or racial prejudice.”

Dr. Steve Evans ’79, who estimates that he was among at least six or seven Jewish brothers living in the house at the time, said, “There were plenty of practicing Jews at the house that signed off on this.”

“If there was any thought back then that was would be viewed as anti-Semitic 40 years later, we wouldn’t have done it,” he added. “This hullabaloo is so incredibly out of context and unfair to this guy who is a champion of Gettysburg College.”

David Naser ’83 agreed that there was no anti-Semitic intent among those pictured in the photo.

“I truly cannot believe that he dressed in that costume to make an anti-Semitic statement, and I certainly cannot see him associating in any way with Neo-Nazi groups either at that time or today,” Naser said.

Evans said that Garthwait intended to depict the “bumbling” character from “Hogan’s Heroes,” Sergeant Schultz, whose most famous phrase from the show is “I see nothing! I know nothing!” He also said that, in 1979, the swastika was not a symbol of white supremacy, but “was a symbol of defeated Germany, of this horrible thing that happened that was crushed.”

Evans added that Alpha Chi Rho was a “real cross-section of campus” in terms of diversity, had brothers who were black, gay, and Jewish, and had a reputation for treating women with respect at house functions.

“CROW had a reputation for having nice guys in it,” she said.

Nielsen does remember seeing the photo in the yearbook. She said it stuck with her, but she does not believe there was “any kind of hate speech or anything like that.”

“Like every other party, the drinking was pretty much the whole focus,” she said. “And, then everybody’s ‘focus’ got a little blurry.”

She said she has a limited recollection of Garthwait, but she recalls him as being “affable.”

Fedalei concurred with that recollection of Garthwait.

“Bob is a very generous, gracious, and tolerant person with no religious or racial prejudice whatsoever,” he said. “Unfortunately this photo was taken completely out of context.”

Evans said that he does not blame Hillel or the Judaic Studies faculty for its visceral reaction to seeing the photo, but that he blames the college for depriving Garthwait of any due process. He said that he is sure Garthwait decided to resign because he did not want to draw negative attention to the college and thought this would be how best to avoid it.

In an email sent to the campus community Thursday afternoon, President Janet Morgan Riggs ’77 quoted Garthwait, who said, “Resigning reflects how seriously I understand this situation to be and it is important to me that our community see that through my action to resign.”

Evans said that Garthwait has been treated unfairly throughout the process.

“My biggest gripe is that here’s a guy who has gone out of his way to make the Gettysburg student experience better … and whose presence on the Board [of Trustees] is an amazingly positive influence,” Evans said. “He has been a champion that seeks to make Gettysburg College a better place.”

Moving forward, Evans said the college needs to turn this into a teaching moment by sponsoring a conversation about Garthwait’s legacy and impact on the campus.

“People’s lives can be devastated by artifacts of the past that do not reflect who they are in the present,” he said. “We need some communal acknowledgement of who he is … this photo does not reflect any Anti-Semitism or bigotry from his past.”

Naser added that Garthwait’s contributions to Gettysburg College in the years since the photo should speak louder than “an ill-judged photo.”

“The Garthwait Leadership Center was established to provide the opportunity for students of all races, religions, and ethnic backgrounds to improve their leadership skills in order to be more prepared in their careers and to make our country a better place in which to live,” he said. “By failing to judge a person’s actions within the context of the time when they lived, we are attempting to rewrite history just for sensationalism.”

In Thursday afternoon’s email, Riggs said that the Board of Trustees would form an advisory group in the near future to facilitate ongoing conversation about this issue and develop recommendations for how to handle it and any similar situations in the future.

“On a personal note, I have known Bob Garthwait for 11 years,” she added. “I have found him to be one of the College’s most avid supporters, one whose primary goal is to enhance the student experience. I want to thank him for the gracious manner in which he has handled what we all recognize is a very difficult situation.”