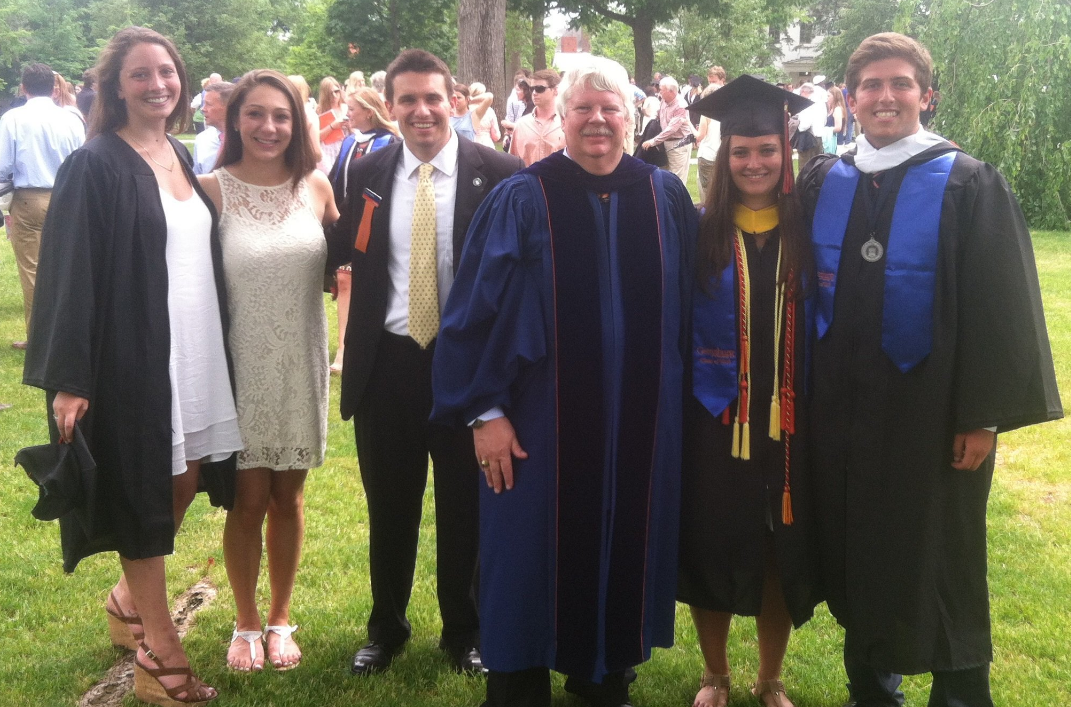 Yesterday morning, it came to the attention of the Gettysburg campus community that one of its alumni and Board of Trustees members, Robert Garthwait ’82, was photographed in a Nazi uniform costume in the college’s 1980 Spectrum yearbook. Pictured to the far right of the photo, the namesake of the college’s Garthwait Leadership Center is seen in a German soldier uniform with the bright red swastika band on the left sleeve.

Gettysburg College President Janet Morgan Riggs emailed the entire campus the news that morning, announcing both the situation and Garthwait’s apology and decision to resign from his position on the Board of Trustees.

Garthwait offered some context of the picture, explaining it was a “Hogan’s Heroes” themed fraternity party. The late 1960s- early 1970s TV comedy show depicted a German Prisoner of War camp during WWII.

Response across campus to the unearthing of the photo has ranged from outrage at the discovery to sympathy for Garthwait.

“As a member of the Jewish community, I do not believe Robert Garthwait should have resigned. While I agree some form of action had to be taken, I believe that his resignation was hasty and unnecessary. Mr. Garthwait has been a major part of the Gettysburg community for decades and I think that his resignation, and the potential removal of his name from the Garthwait Leadership Center, is an extreme punishment,” offered Michael Dampf ’21. “This obviously unacceptable incident happened almost 40 years ago and, from my reading of Mr. Garthwait’s apology, I think he understands that his actions were wrong. Therefore, I do not believe the extreme actions that are being taken are warranted. I am not calling for the Board of Trustees to reject his resignation, but I do hope that this man, who has devoted his life to Gettysburg College, will not be permanently disgraced in the eyes of our community.”

“Hannah Labovitz and I met with Dean Ramsey and President Riggs yesterday afternoon to discuss the photo of Bob Garthwait that has recently come to light. We are very appreciative for their willingness to hear our concerns and listen to our frustrations,” he said. “However, we do not consider this matter settled. We do not think a swastika armband has ever been acceptable attire. Mr. Garthwait’s decision to resign from the Board of Trustees is an appropriate first step but larger strides to combat anti-Semitism at Gettysburg College are still needed. Hannah and I would like to hear from other students and welcome any and all opinions about this. Hannah and I will continue to be in contact with Dean Ramsey, President Riggs, and the Board of Trustees regarding this matter.”

Ben Lowenberg ’20, a student on Hillel Executive Board, recalled, “When I first found out on Sunday night my first reaction was complete shock. I could not believe that Gettysburg College had allowed this in the first place and that it remained in the library for the past 40 years without someone noticing or doing anything about it.”

Lowenberg explained that he feels that the steps that have been taken have been rushed, allowing both the school and Garthwait to save their reputation.

“I hope that the entire Hillel executive board has an opportunity to discuss and voice our opinions on the matter with the board of trustees and President Riggs, instead of just a representative,” he said.

Ricardo Hernandez ’21 offered a contrary opinion, responding, “My first reaction was shocked but disturbed at the same time. Disturbed because the college allowed the photo within the yearbook and shocked because we are really going to invalidate someone’s passion for this school over a mistake they made when times were drastically different. It happens way too often in this day and age, such as with Kevin Hart. People change and to hold someone to the standards of today is a little misleading. I can understand the college’s decision. I hope the best of luck for Garthwait and hope that a mistake doesn’t define who he is a person.”

Hillel Director David Bass added, “I think the College has handled this situation very well at this point. Mr. Garthwait’s resignation from the Board of Trustees was prompt, and this shows the seriousness with which the College takes this situation. I hope that this situation will cause us both to look back and to look forward.”

Bass feels it is important study the photo in the context of the past and to question why the wearing of the swastika was trivial.

“Going forward, I anticipate this situation will be an impetus for more dialogue and coalition building among our students,” he said. “Student leaders across the campus have an opportunity to work together with renewed purpose in continuing to create an inclusive and supportive community.”