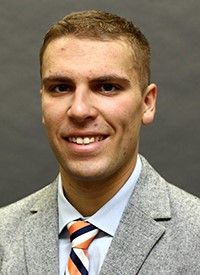 The Bullets started off strong, but began to fall behind after the first quarter. With an impressive 65.1% shooting average, the Fords soon gained a clear lead over the Bullets. Senior and Captain Alec Warren, hailing from Shawnee High School in Medford, New Jersey, scored 8 points for the Bullets and added 2 boards.

While the Bullets did not pull off the victory over the Fords, they have continued to remain positive throughout the season under Warren’s leadership, despite their record. The team’s motto “Why not us?” has remained constant throughout the season. With a new coaching staff this year, the Bullets have undergone many changes, with Alec Warren stating in the preseason that he knows the Bullet’s success “…is not going to happen overnight.”

Warren emphasized the importance of “building a culture and establishing new standards and expectations” for the team. With the optimistic outlook and emphasis on improving rather than winning, the team should be in great shape by next year. He remains a positive influence on his teammates, many of whom are younger, as he gushes about all “the talent on this team.”