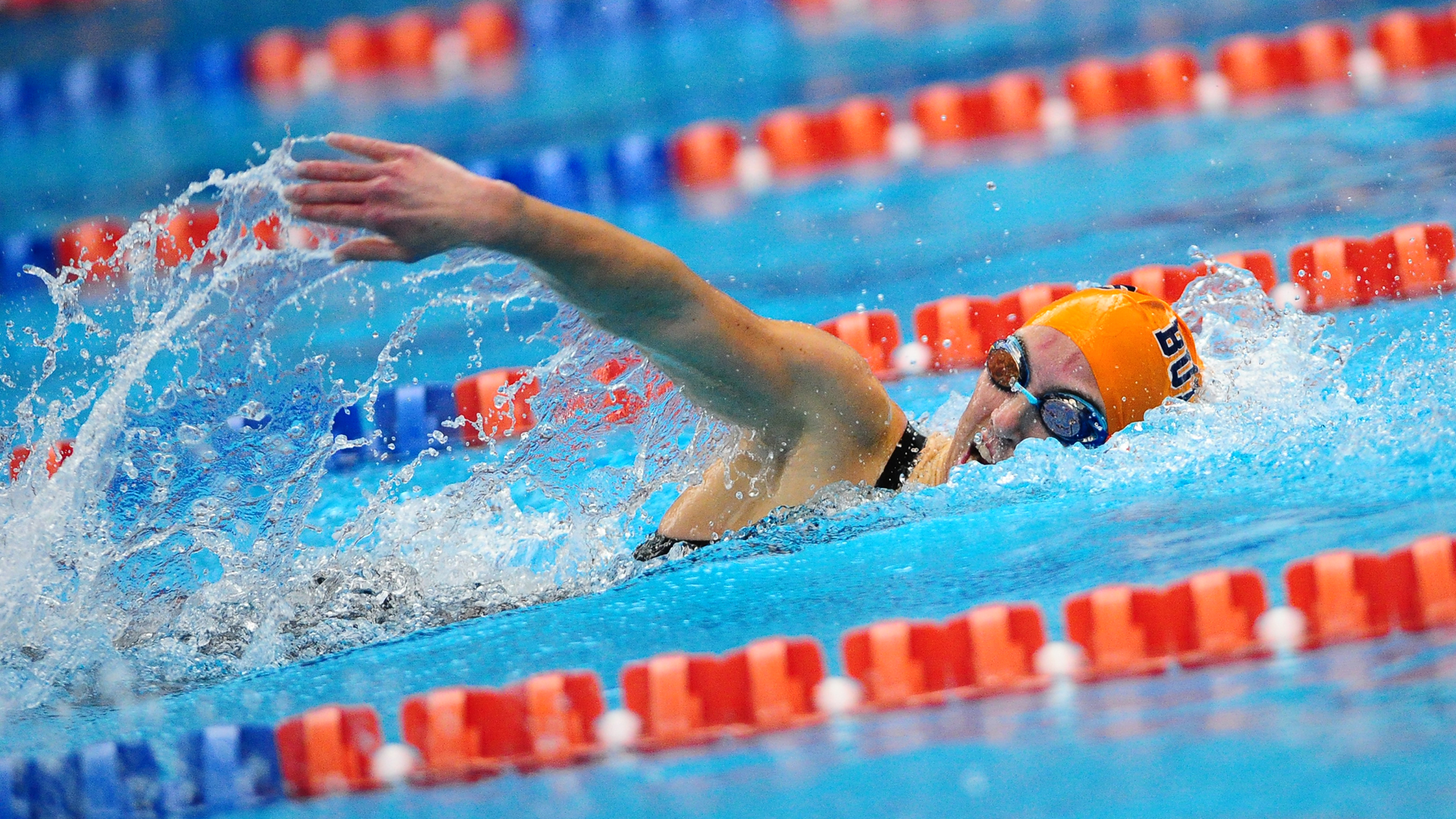 Kate Crilly ‘20 was part of the quartet of swimmers that beat the 800 free relay by .06 seconds (Photo courtesy of David Sinclair, Gettysburg College Athletics)

The first day of the invitational was highlighted by first-year Megan Wojnar’s performance in the 200-yard backstroke. Wojnar ’22 finished with a time of 2:06.91, edging Lynne Cassidy ‘92’s record by .3 seconds. Cassidy captured 25 All-American awards throughout her career, so to break one of her records in her first season as a Bullet puts Wojnar on an enviable trajectory.

Another winner on the day was first-year Katie Cooper ’22, who won the 200-breaststroke in 2:23.44, the second fastest time in school history. Junior Kate Crilly ‘20 also took a victory in the 100-freestyle.

The Bullets also had several second-place finishers on the day which was huge towards winning the team points battle. Lindsay Hayden ’19 took second in the 100-free with a personal best of 53.72. Katie Jenkins ’22 finished second in the 200-fly in 2:08.45, just off the school record by .23 seconds. In addition, Katherine Sears ’21 was edged in the last lap but still took second in the 1650-freestyle.

The Bullets also worked well together on the relay as they were runners up in the 200-medley and the 400-free relays. A couple of third-place finishes added to the Bullets point total with senior Maggie Morehouse ’19 finishing third in the 1650-free, and sophomore Sydney Jaramillo ‘21 taking third in the 200-fly.

The second day of competition proved to be a great one for the Bullets. They battled point for point with the University of Mary Washington before settling in second, 4 points back at the end of a long invitational.

Wojnar ‘22 was busy in the individual events, winning both the 400-IM and the 500-freestyle. Cooper ’22 also won an event, taking the 100-breast stroke, and finishing second in the 50-free.

Jenkins ’22 snagged two runner up finishes in the 100-fly and the 100-breast stroke. Krilly ’20, Morehouse ’19, and Sears ’21 finished in second, third, and fourth respectively in the 200-freestyle, providing necessary points in the close team battle.

Despite a huge day in the relays, the Bullets were edged for the invitational victory by the slimmest of margins, 1,015 – 1,011. However, as the season continues, the young team, with plenty of veteran leadership will continue to look to make improvements as the year progresses.