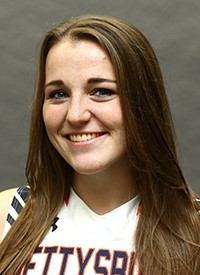 Senior Emma Dorshimer had a great game at Haverford, scoring 20 points and recording her second straight double-double.  Dorshimer led the Bullets to a close 55-52 win over the Black Squirrels.  She’s led the Bullets on 4-game win streak and an impressive 7-1 record.

She went 3-4 from deep, her third game this season with three 3-pointers.  During this game, she became Gettysburg College’s all-time leader in 3-pointers with 187 career 3-pointers made.  Dana Bear ’04 previously held the record with 186.

Additionally, Dorshimer added 10 boards to lead the team and 2 assists, while leading the Bullets offense to shooting 42% from the floor and 41% from three.

In her senior season, Dorshimer is averaging 22 points per game, her collegiate career best. She’s also getting it done on the defensive end, leading the team in both steals with 11 and 5 blocks.

Gettysburg Women’s Basketball competes next in the D3hoops.com classic on December 28th in Las Vegas, then returns home to immediate Centennial Conference action to face Muhlenberg on January 5 at 2 p.m. at home.