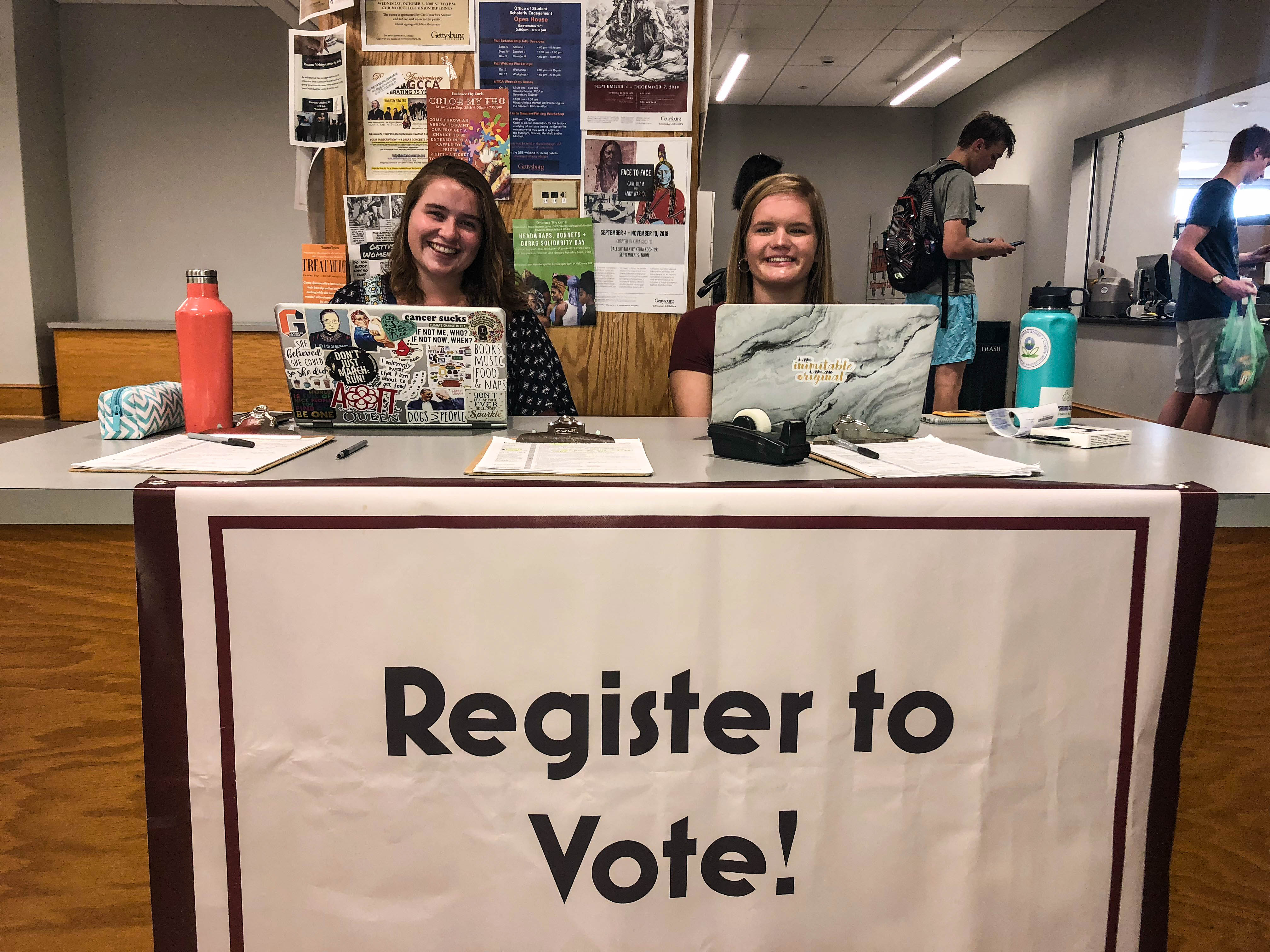 As the Midterm Elections approach, student groups have been encouraging students to vote on Tuesday, Nov. 6 (Photo Gabi Eglinton/The Gettysburgian)

Do you remember where you were on the night of Nov. 8, 2016? I sure do. As part of College Democrats, my friends and I had spent the entire day working the precinct on campus inside the CUB. All morning and afternoon we watched with nervous energy as streams of voters entered and exited the ballroom. We felt good—the polls indicated a Clinton victory, but likely a close race. At 8:00 p.m. when the polls closed, we checked our numbers and were relieved to see that about 80% of registered Democrats on campus had voted. But it wasn’t enough.

I don’t need to tell you what happened next. What I will tell you is why this year is so important. If you’re reading this, you probably know that the midterm elections will take place on Tuesday, Nov. 6. Midterm elections occur in the middle of a sitting president’s four-year term. At this time the entire House of Representatives is elected and about a third of the Senate. There are also gubernatorial races and state-level positions up for grabs in a midterm year, and so many important local elections as well. In the last midterm elections, just 17% of millennials voted. That’s right—17%. Why? Because young people are busy, don’t care about politics, or just don’t think their vote matters. This year things need to change.

A lot of people ask me why voting really matters. And while it is true that the odds are extremely low for one vote to change the outcome of an election, voting is more than just that. When we vote, we add our voice to a collection of other likeminded voices. We participate in something larger than ourselves, something that is more powerful than any one politician or elected official. Democracy is a remarkable system, but it is exceptionally fragile. Not voting creates a ripple effect—it equates to not caring, and this apathy erodes our core values and serves as an abdication of our duty as citizens. Not voting is why Donald Trump is our President and Republicans control the halls of Congress and ram through nominations to the Supreme Court. In 2016, 44% of eligible Americans did not vote. To put that into perspective, 28% of Americans chose Hillary Clinton, 27% chose Donald Trump, and the rest—nearly half the country—sat out.

Although Donald Trump is not on the ballot this November, his policies and behavior are. Scott Wagner, the Republican candidate for Governor, is a Trumpian figure who once stole a reporter’s camera at an event and, more recently, told a young woman she was “young and naïve” for asking a question about climate change (Wagner believes that human body heat is causing global warming). Just this month, Wagner threatened his opponent on camera, yelling to incumbent Governor Tom Wolf: “I’m gonna stomp all over your face with golf spikes.” Is this the type of person we want representing us in Harrisburg? Of course not.

I urge all of you to get out and make your voices heard on Nov. 6. We cannot afford another 2016, and a true course-adjustment this year depends on you. We have to stand up for what is right in this country—equal opportunity for all, basic human decency and respect, pride in our diversity, and a commitment to freedom and democracy here and around the world. The Republican party is not offering any of those ideals this year, but Democrats are. And they need your support up and down the ballot on Nov. 6. The future depends on us, so I hope to see you at the polls.