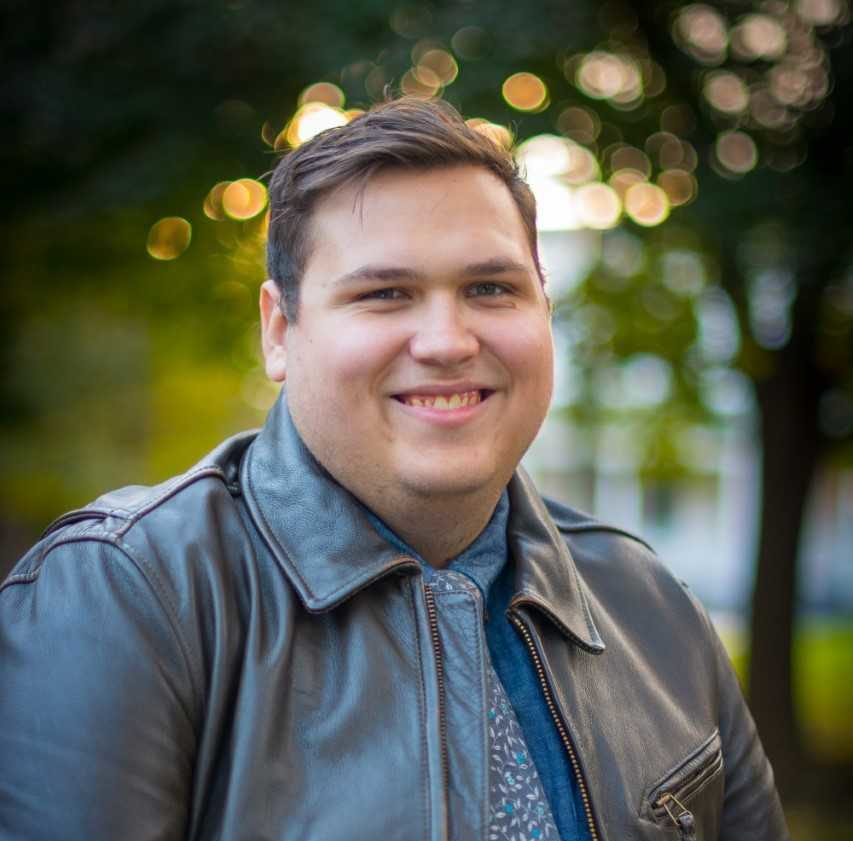 What is your major?

I’m a Music major with concentrations in trombone, composition and conducting and a minor in Peace and Justice Studies.

What is your instrument?

My primary instrument is tenor trombone, which I’ll be playing for this recital, but my main focus is actually in composition, which will also be featured on my recital.

What has been the most important part of your conservatory experience?

For me, the huge variety of subjects and specializations that I’ve been able to explore while studying at the conservatory has been a great boon. The faculty here all have diverse interests and are all very open and helpful to students who share those interests, allowing for many opportunities in Independent Study (of which I’ve done a few) and mentor-ship. I’d especially like to highlight and thank three professors: Dr. Avner Dorman, who has guided and helped me so much with my studies in composition and whose mentoring during my time at Gettysburg has been invaluable to my musical and personal growth, Dr. Russell McCutcheon, who I’ve worked for in the band office for the past three years and whose baton I’ve played under in the Wind Symphony for many concerts, for his enthusiasm in approaching music and his constant willingness to share his knowledge, and former director of the orchestra, Prof. Vimbayi Kaziboni, who, despite his short tenure at the conservatory, left an indelible mark on it and who inspired and challenged me to broaden my knowledge and skills.

How will your time here have influence on your career in music?

I think it will have a profound influence on my career. As an incoming student, I hadn’t been planning to pursue composition seriously, but through my time here, and with the help of many professors and fellow students, I uncovered and nurtured my passion for composition, which I am now pursuing as a career.

What are your plans for after graduation?

I am currently applying to a number of graduate programs to continue studying composition, so I’ll hopefully be beginning a Masters/PhD next fall.

Tell me about your recital.

I’m really excited to be presenting this program that will feature four world premieres of works that I wrote, including two that were written specifically for this recital. The concert will basically be split up into two halves with the first featuring my trombone performance while the second will feature some of my peers, as well as a faculty member, playing some of the pieces I’ve written. On the trombone side of things, I’m quite excited to share Blue Wolf, which is a piece by trombonist Brad Edwards that calls for a number of special techniques from the performer, including the removal of the tuning slide and the performer singing while playing the trombone. I’ll also be playing my own Duo for Trombone and Piano, written specifically for this recital, with Dr. Scott Crowne. For those who listen to the Gettysburgian’s podcast, “On Target,” the concert version of its theme music, a Prelude for four-hand piano, will be premiered by Dr. Jocelyn Swigger and Elliot Pajer ’19. Afterwards, Nick Sontag ’19, Jacob Molina ’22, Sebastien Ridore ’19, and Sophia Rostock ’19 will be playing my string quartet, Anxiety, which was written during the end of 2016 and beginning of 2017. Finally, the concert will conclude with Rose Martus ’19 playing Character Study I, a piece for unaccompanied flute that I wrote for her to premiere at this recital.

What is your advice for future conservatory students?

Take the time to explore and learn from what’s around you. Even though you may feel busy or tired, we grow the most when we’re exposed to new and challenging things.

Alex Pearson '21 intends to double major with a Bachelor of Music in Vocal Performance and a Bachelor of Arts in Spanish with a minor in English focusing on Creative Writing. She intends to join choir as well as get involved in community service and Spanish-related activities. Follow her on Twitter @alexpearsonstar and on Instagram @smilealexpearson.