The student success effort cuts across the three divisions whose vice presidents launched the effort: Enrollment & Educational Services (Barbara Fritze), College Life (Julie Ramsey), and Academic Affairs (Christopher Zappe). Cushing-Daniels and fellow co-chair Dr. Robert Bohrer, Associate Provost and Dean of Public Policy Programs, led a series of meetings and institutional analysis over the course of about 10 months to produce the five-page report, which outlines the scope of the challenge and makes 11 recommendations for both the immediate and intermediate terms. The report narrowed the scope of the study to retention strategies for students between their first and second years, the most frequent time for student withdrawals.

Bohrer said that the difference between this effort and previous college endeavors surrounding student success is that this task force explored what faculty and the academic division need to do to promote student retention, something that, in the past, has generally been a stronger focus in the College Life and Enrollment & Educational Services divisions.

At a meeting of the college faculty on September 13, Cushing-Daniels said, “Our involvement as a faculty … is about how do we unify what is already happening and what else can we be doing to promote student success.”

Many of the recommendations center on the role faculty play as advisors and the need to provide more training and education of existing resources as well as to incentivize faculty to engage fully in their advising responsibilities by adding assessment criteria to evaluations of faculty at all levels of seniority.

Though he acknowledged a “continuum” of engagement in advising among the members of the faculty, Cushing-Daniels said that the task force’s goal is not to create more work for the faculty who are already fulfilling their responsibility as advisors. Rather, he said that providing faculty with more information about resources that are available for students and deploying a technology tool to help track and manage advisees will increase the efficiency in advising and allow faculty and students to save time.

Specifically, the task force recommended adopting the EAB Student Success Collaborative, a technology tool that tracks various events such as student attendance, grades, and graduation progress to provide advisors with timely information to proactively identify issues that may affect student success. Despite the task force’s recommendation, the college decided not to adopt the tool largely, Bohrer said, due to its high cost.

“I think, eventually, we’re going to get to a technology piece,” Cushing-Daniels said, “but part of we needed to get to first was a commitment on the part of campus users” to buy into the benefits of such a tool so that its cost could be justified by its benefits.

“If you care about it you assess it,” Bohrer said, though, emphasizing that good advising is about forming relationships, he added, “It’s not something that’s easy to measure.”

Notably, a task force on advising that met during the 2010-11 academic year also unanimously recommended adding an advising component to faculty evaluations and proposed draft criteria for such evaluations, which were discussed at a meeting of the full faculty on March 24, 2011, when numerous concerns were raised as to whether student evaluations of faculty advising would yield accurate results, and in several subsequent meetings of the Academic Program and Policy Committee (APPC) over the next two academic years.

Ultimately, although minutes from both APPC and the faculty at large as well as the report from the advising task force suggest broad consensus that faculty should be assessed in their performance as advisors independently from their performance as teachers, no such changes were made. Cushing-Daniels noted that Zappe had, however, reframed the “teaching” category of faculty evaluations to “teaching and advising,” suggesting that quality advising is a priority of the academic division, although no formal evaluation metrics have been implemented regarding advising specifically.

“If you care about it you assess it … It’s not something that’s easy to measure.” – Rob Bohrer on assessment of advising

At the faculty meeting, Cushing-Daniels insisted that the task force’s goal is not to create more work, but to help faculty be more effective as advisors in a time-sensitive way. 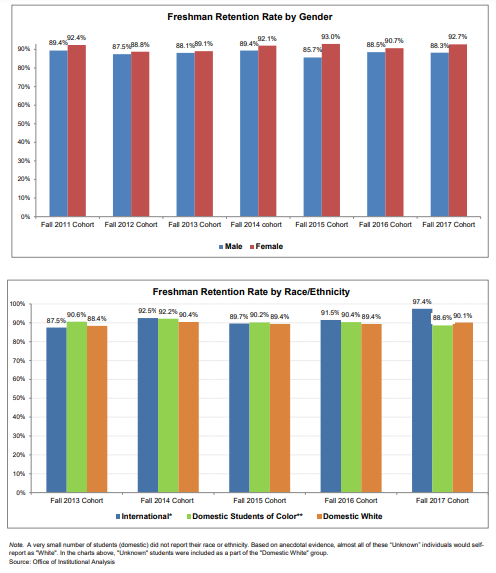 While some faculty at the meeting instinctively recoiled at the notion that full-paying students require additional attention, Cushing-Daniels emphasized that the college makes a commitment to all students regardless of their economic situation.

“We have an obligation to all of our students regardless of what pay status they are,” he said.

Director of Institutional Analysis Suhua Dong reported to the faculty that the college’s retention rate for full-paying students is lower than it is for domestic students of color and first generation students.

“I think the faculty were shocked — I’m not even sure they believed it — when we pointed out that the first year to second year retention rate of our domestic students of color is higher than our white students. That’s not the narrative,” Cushing-Daniels said.

“We have an obligation to all of our students regardless of what pay status they are.” – Brendan Cushing-Daniels

He credited the work of campus institutions such as the Office of Multicultural Engagement for the strong retention rate of domestic students of color, which improved in recent years to overtake the rate for white students. Part of the task force’s aim is to better coordinate resources geared towards other students to improve retention rates across the board.

“If there’s a group that is below [the average retention rate], you want to pull them up,” Bohrer said, adding that it is not the case that first generation students or domestic students of color are not also full-paying students, a mistaken dichotomy that he believes colors some faculty’s perception of the issue.

Cushing-Daniels emphasized that the task force simply aimed to follow the data to logical conclusions and recommendations.

“What we are identifying in this process … is those groups that are currently not persisting and not achieving degrees at a higher rate than other students. Cushing-Daniels said. “One of those groups is students of low need.”

“I don’t have any problem saying that anything that helps us get students to a degree is also helpful to the business model. If we can prevent a student from failing out or transferring … it makes our customer base happier and our admissions team’s job easier,” he said. “Where we start the work is this notion of the obligation we have institutionally to ensure that students we admit have the ability to persist to a degree.”

He hastened to note that retaining any student — even those who receive a great deal of financial aid — helps the college’s bottom line.

“Even a student who is receiving an awful lot of financial assistance, there’s a beneficial impact on the bottom line to retaining even someone whose net tuition is a low number,” he said. “If we have made their experience more positive, they’re a better ambassador for Gettysburg College going forward no matter who that student is, where they come from, or what their resources personally are.”

“We recognize as a group that this is a serious need for the institution because we have an obligation to ensure that more of our students persist to a degree, so the importance of the work raises our level of commitment to continue in the endeavor.” – Brendan Cushing-Daniels

Some of the smaller-scale recommendations of the report have already been adapted. The college is currently exploring how to deploy financial literacy training to students after a donor came forward with a pledge to support such efforts.

Also, based on feedback received from faculty members after the faculty meeting, the college will remind advisors what resources are available to support students they identify who may be struggling.

The college is also paying greater attention to issues of neurological diversity and supporting students with learning disabilities, Bohrer said, which may include providing more pedagogical training through avenues like the Johnson Center for Creative Teaching and Learning.

Overall, Bohrer said that one of the most important takeaways from the task force’s work in his mind is that all of the members of the group have agreed to continue to meet moving forward to continue to develop student success initiatives.

“These are pretty busy people,” he said. “The fact that this group has agreed to continue to work is unusual, and, I think, telling because people feel that it’s important enough work and productive that they’re willing to.”

Cushing-Daniels acknowledged that previous work on student success has not always been successful, but that this group is focused on ensuring that its efforts achieve results.

“Many of these folks have been on many of these task forces and committees and recognize that some of their past work hasn’t actually borne fruit,” he said. “We recognize as a group that this is a serious need for the institution because we have an obligation to ensure that more of our students persist to a degree, so the importance of the work raises our level of commitment to continue in the endeavor. The way we’ll find out if we’re successful, in part, is do we move the needle on some of these things. Do we move the needle on creating better mentoring and advising? Do we move the needle on greater retention and persistence to a degree? From there, once we feel like we’re moving in the right direction, what’s next?”