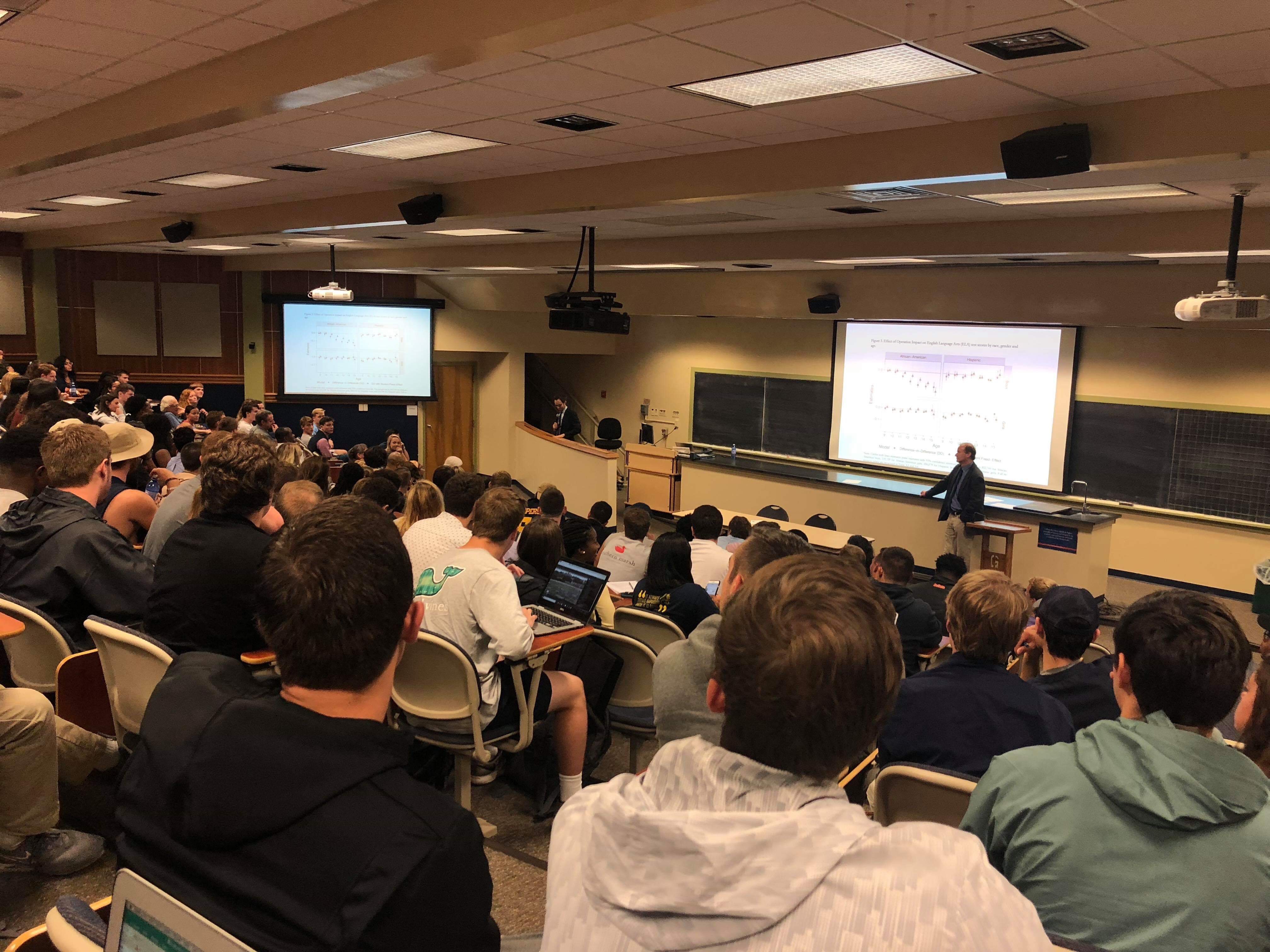 Members of the student body and faculty came together on Thursday, October 11 to honor the late Economics Professor Gondwe at the Derrick K. Gondwe Memorial Lecture on Social and Economic Justice. Sponsored by the Economics and Africana departments, the lecture was provided by Dr. Joscha Legewie, a professor at Harvard University.

Professor Gondwe was born in Malawi and attended college in Lake Forest, Illinois before pursuing his master and doctorate degrees at the University of Wisconsin and University of Manitoba. He was the first black person to become a full professor at Gettysburg, as well as the first to be awarded tenure. Gondwe created the Africana Studies program and International Relations Council at Gettysburg college, deeming him a role model for many students of color, as well as others who wanted to see diversity on campus. He cared greatly for the Department of Economics, and as Charles Weise joked at the lecture, cared about the hirees of the department. He left ten questions for Professor Weise’s interview that Gondwe himself have to approve of before hiring him.

Legewie received his bachelor’s in social science from HU-Berlin, later obtaining both his master and doctorate degrees from Columbia University. His prior teaching experiences include a variety of prestigious schools, such as New York University and Yale University. Professor Lewegie has served as the Assistant Professor of Sociology at Harvard since 2018. His research focuses largely on minority groups and the effects of police forces on them, noted by the title of his presentation “Racial Bias in Policing and the Consequences for Minority Youth: Lessons from Big Data.”

His lecture covered numerous topics, from issues in education, the health of infants, to stop and frisk occurrences. Professor Legewie’s thesis is that last enforcement in recent decades has become more observed with minor offenses. He told a story about Professor Gondwe, wherein he explained that on Gondwe’s eighteenth birthday, while he was celebrating with his friends calmly outside, he was surrounded by police cars and forcefully manipulated by the police. Data supports the idea that African Americans are almost sought out by the police, with New York City researching finding that 51.3% percent were stopped, 29.5% were searched, and 80.5% saw or heard about someone who was stopped. The New York Police Department has a large amount of its police force in Central Harlem, wherein there are about eight hundred stops per one thousand residents, and over forty percent have physical interaction. The Zero Tolerance Policy can be blamed for the strict enforcement of low-level crimes and extensive use of pedestrian stops to prevent imminent criminal activity. While impact zones and police have lowered crime in New York City, likewise in neighborhoods, its adversary consequences surround racial profiling and discrimination. The New York Police Department is required to fill out a UF-250 form after every stop and frisk so that physical force, sex, ethnicity, and race are documented, which has been questioned for validity due to an officer’s ability to lie about their reports. Police action was significant in impact zones, which are chosen nonrandomly and largely target minority communities. These provided few changes in the number of felony arrests but a substantial increase in misdemeanor arrests.

Professor Legewie is currently focusing on how maternal exposure to police killings can affect infant health. Today, black infants are more than twice as likely to die as white infants, or 11.3 per 1000 black babies, compared to 4.9 per 1000 white babies. There are over 4000 excess deaths each year, and African American babies have death rates similar to those in Mexico and Libya. The causes of these deaths range widely, yet societal and systemic racism are the root causes. There is biological data that solidifies psychological stress is connected to infant health. Unarmed black neighborhoods are filled with unprovoked police shootings, 1500 police killings happening alone in California from 2007-2016. Of course, the New York Police Department is only held accountable for the level of crime in the area they are responsible for, which simplifies the cost of policing strategies. The integrity of police officers should be studied alongside crime and racial and ethnic inequality in the United States. There are multifarious social consequences of policing that are not simply conjectured but statistically proven.

The sociologist hopes to complete his research on policing and minorities within the next three years, which will be based on numerous variables. He laughingly talked about returning to Gettysburg College in 2021 and answered some questions from students regarding economics and variables in his past experiments that were ambiguous. The Memorial Lecture will be held again next year by Gettysburg College due to the generous endowment from the Keefer family.