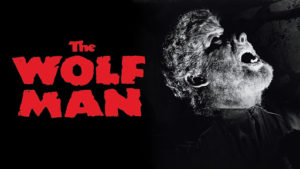 So, truth be told, I do not enjoy this movie nearly as much as the title of this review might indicate. Among horror films that I like, this early rendition of the man-versus-beast struggle ranks rather lowly for me. Among the Universal Classic Monsters Series’ franchise openers, this film ranks last. This has been the case for me since I first viewed it as a tyke. Though the hair, makeup, and costume of the Wolf-Man appeal to my sense of what’s cool, and the monster’s bodily movements and sound effects are satisfyingly threatening, the problems that I have with it stand too firmly in the way of my fully enjoying it. I will always prefer 1935’s Werewolf of London.

In all likelihood, most of these problems could only have come from the time during which the movie premiered. The narrative takes a long time to get off of the ground. The main character is unlikable and honestly a bit of a creep; the romance is colorless and artificial; and of all of the movies in the Universal Monster canon, the sets in this werewolf picture are the least interesting. A gypsy-occupied forest is not as grim as Dracula’s deserted castle or as ugly as the Phantom of the Opera’s subterranean canal.

This is a less-than-stellar review so far. Now that the airing of my grievances is complete, however, I will gladly give praise to the movie’s positive qualities. Though the story may take its time to get started, some may forgive the slow-build technique as applied here in appreciation of all of its foreshadowing.

Lawrence “Larry” Talbot (Lon Chaney) is an American everyman who returns to his ancestral homeland in England to mourn for the recent passing of his brother. Meeting him in the old family mansion is his father, Sir John (Claude Rains), who keeps a telescope in one of the rooms of his rich-person’s house. Once moved in, it does not take long for Larry to find the story’s love interest in the form of a female shopkeeper. Larry is alarmingly forthcoming in asking her out on a date. He spies on her by using his father’s telescope to look at her through her bedroom window and flirts with her by casually informing her that he had been watching her from afar. What a creep.

He and the shopkeeper make plans to go with one of the woman’s girlfriends to the local gypsy campground (you know the one) in the forest that night. Before leaving, Larry buys a silver walking stick from the store. Prudent buy.

At the heavily-forested gypsy grounds in the forest, the three meet a host of uncomfortable characters, including the burly Bela (Bela Lugosi), whose strange interactions with the group convince the viewer that this resident of the grounds may have some hirsute skeletons rattling around inside his closet. After the expendable girlfriend receives a strange and eerie prediction at her palm-reading from matriarchal gypsy Maleva (Maria Ouspenskaya), the three leave the grounds for home. On the way back, an unusually man-like wolf waylays the group, kills the friend, and bites Larry on the chest before Larry canes it to death.

Following that plot development, the expected happens. Larry becomes the Wolf-Man and terrorizes the English countryside. There are screaming young women, ominous foggy moors, and exciting twists in plot; all of which pertain to the gypsy campground and Maleva’s history with the werewolf’s curse, as well as an unsuspecting main character sinking irrevocably into despair. These are the usual elements of a werewolf thriller, and this original film uses them the best.

For this movie, its simple execution defines its uniqueness among its siblings. The most well-defined and decorous set in the production is the rural Talbot manor, with its observatory and cozy living rooms, but even this basic large house is quaint by Universal standards. The only truly outstanding sets are those where the Wolf-Man preys, the cemeteries and city alleys, as well as the mental asylum where Larry eventually has himself committed. The only exceptional performances come from Rains and Lugosi, the two other Universal Monster stars to have parts, and Maleva. The three of them tower over the other cast members.

Given the simplistic stylings of their product, it is clear that the filmmakers were most concerned with telling a story. They were right to name this concern the most critical for the quality of their film. For, in the scenes when all of the characters come together, especially at the film’s hairy, heartrending climax, the large personalities have such command over the small ones that it is clear as to who in the movie knows or are convinced that they know what to do, and who needs the guidance of an authority. Finding the right authority is important in this movie. Sir John is rational and thinks that Larry needs psychiatric attention. Meanwhile Maleva knows about jinxes, black magic, and where Larry’s real hope lies, so Larry must ultimately decide who to believe.

The movie still lacks the consistent pacing, memorable characters, creepy and intense action, and haunting atmosphere of the other series-opener Universal monster movies, sure, and it is the most dated compared to these movies. But the fact that a movie almost eighty years old still attracts any discussion, either critical or casual, attests to its status as a classic. Like all good horror films, there is more to it than thrills and effects.

There is meaning underneath its matted fur. It’s about the fear of not being able to control yourself, of letting loose your darker, more unpleasant, and potentially violent bad side, and not having the choice whether or not to turn back or when. And as for it being dated, what holds up in it are its most valued assets, namely the inimitable makeup for the werewolf and the raw originality of the story. Also, Chaney’s performance as the Wolf-Man is vicious and startling, and allows the audience to forget all about his over-acting as Larry Talbot. For complexity and intrigue, this may not be the go-to. For a well-told story and the purest, most straightforward entry in the werewolf sub-genre, The Wolf-Man will leave your pure and prayerful heart filled with the spirit of a black and windy night.

Alex Romano '20 is a staff writer who is studying to earn a double major in English with a Concentration in Writing and History, and a minor in Theatre Arts. He is also a member of the Film Society and has interest in the school radio program, the literary magazine, and awards offered through the school’s English Department.