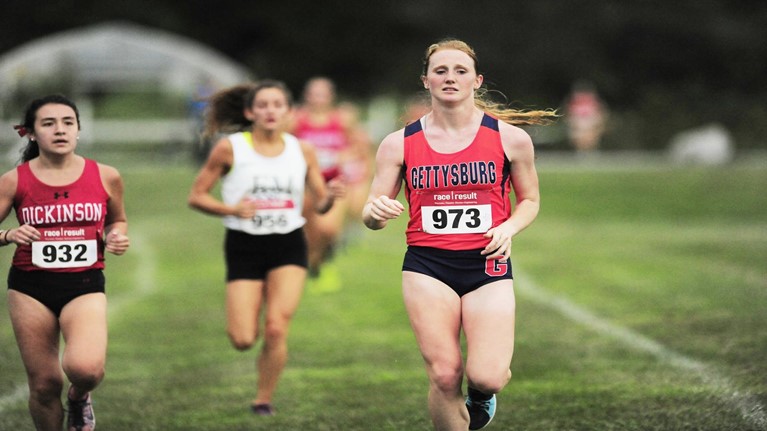 The team’s biggest strength this weekend was their pack running finish, with a 40 second spread between their 1st and 7th runners.  Running in close proximity throughout the race enabled the Bullets to work off of each other and score well.

Leading the way for the Bullets was senior Sarah Rinehart, who finished 12th overall in 20:48. Rinehart, a returning runner from last year’s NCAA nationals meet, looks to go for another top finish as the year progresses.

Following close behind was sophomore Michelle O’Malley and first-year Amy Milner. The underclassmen duo worked well together during the race and were able to move up to 14th and 15th place just behind Rinehart in 20:54 and 20:58.

The next three runners to cross the line for the team were all seniors. Margot Hoagland and Colleen Campbell occupied the key 4th and 5th spots for the Bullets to round out the scoring in 21:02 and 21:15. Both Hoagland and Campbell are captains on the team and will use their wealth of experience and race knowledge to lead the team through some of the larger races as the season progresses.

The two displacers, senior Danielle DeMichael and first-year Kathrin O’Brien were key as they pushed scorers from other teams farther back, cementing the team’s victory over Franklin and Marshall.  Coming in 21:17 and 21:28 respectively, the duo kept close to the team’s front pack, finishing hard down the final stretch.

Madison Fox, another senior on the experienced team, reflected on the opportunity to race on the Bullets’ home course for Little 3 as both a first-year and a senior.

“I loved the opportunity… it allowed me to reflect on how I have grown and changed as a runner and a member of the team,” said Fox.

Throughout the course this Friday, the Bullets were cheered on by supportive friends, teammates, families, and even professors.  Fox said the support from the crowd signified how Gettysburg has become a true “home” for her and other athletes on campus.

The Bullets have big goals for the rest of the season as they try to continue to build on a strong season last year. Although they lost All-American Elizabeth Hilfrank ’18 to graduation, the team returns a strong group that wants to improve on their overall conference and regional team finishes, and possibly add another national qualifier.

The team will hope to accomplish this through hard training and by being as supportive of one another.

“[We] [want] [to] make the season as successful as possible,” said Fox.

Training yearlong in adverse conditions, team members have become close and supportive, while pushing each other to greater heights.

The team looks to continue to improve as the season moves from the early 4k and 5k race distances up to the 6k distance. This Saturday, the Bullets will travel to Kutztown for the D2/D3 challenge where they will face stiff competition from many of the top Division 2 and Division 3 teams in the region.