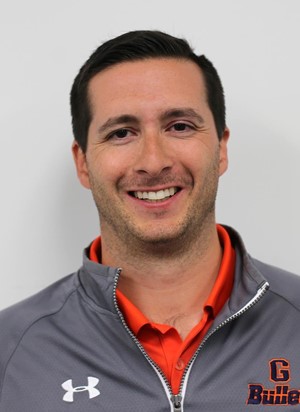 B.J. Dunne officially began his position as head coach of the Bullets men’s basketball team Monday, May 7. Sports editors Claire Healey and Elizabeth Hilfrank sat down with him to learn a little more about his prospects for the team and how he likes Gettysburg so far.

Healey & Hilfrank: How did you find Gettysburg?

Dunne: My wife is an alum, Megan, she graduated in 2008. So, Gettysburg has always been a really special place. We saw that Petrie was retiring, talked it over, and it seemed like being closer to family and friends would be a good move. I’ve always admired Petrie from afar, and Gettysburg is an institution that values athletics and academics, which is really attractive. While we built the program at Vassar, and that experience will help me here, I’m excited to continue the tradition that’s begun here. The interview process also exceeded expectations. Everyone was so open and welcoming. It was great.

H&H: What are your primary goals for this team?

D: The first goal is we want to create a men’s program that is unparalleled nationally and in the conference. We want to emphasize academics and athletics. We want players that are positive and respectable members of community. They are going to be immersed and involved in Gettysburg. We want to graduate men’s basketball players that we can all be proud of. I don’t talk about winning because that’s obvious. We have a “Do your job mentality” that is the pursuit of excellence. There is the expectation to finish in the top half of the Centennial Conference each year, and we will prepare for that by taking advantage of the non-conference competition. We will always try for the at-large bids.

H&H: How do you plan to follow in Petrie’s footsteps?

D: I’m thankful to follow Coach Petrie because he created a great tradition with invested alum. He recruited good players and created a winning tradition we can sell. He’s been here 30 years, which makes me excited because there’s a reason for that. My style is going to be different, though, and I have to continue to build trust with the guys to kind of recruit them again.

H&H: How have the first few practices with the team been?

H&H: You came into the head coaching positions at a pretty young age, so did you know always know college coaching was for you?

D: I actually thought I wanted to work in the main office for an NBA team. I interned looking at draft picks etc, but then I realized that once the team was built I would have no say in what happened after. I like building relationships and working with people, so I realized I wanted to be in basketball but on floor coaching. I was a student assistant coach my senior year and became totally immersed in it. I’ve been doing it ever since.

H&H: Is there something special you find in liberal arts student athletics?

D: I have a strong affection for liberal arts colleges [as a Bates College graduate]. At a lot of liberal arts educational systems you get to take control of your own academics. Being able to write is a really important piece. A lot of times you work in groups, and teamwork is important. It prepares for the real world.

H&H: Outside of the actual skills required for basketball, what do you think is most important for success with the team?

D: We talk a lot about sharing your pie. You play division III in sports because you’re passionate about it. I just don’t think anything great is accomplished without enthusiasm. Basketball is a really long season. Loving the game, and having the grit — those are the intangibles necessary to win.We want to recruit players who have a winning tradition. Gettysburg gets the best players because of success in academics, too.

H&H: Any plans to coach golf, too, like Coach Petrie?

D: I’m going to be the assistant men’s golf coach actually. I taught golf at Vassar, so I know a little about it.

H&H: How does your sociology background help in coaching?

D: I actually did my college thesis on group cohesion on sports teams based on Emile Durkheim’s organic and mechanical solidarity [in] collegiate athletics. Being on a team and leading one is all about analyzing and communicating effectively — how you deliver information to people. You need to know how to communicate effectively.

H&H: Have you been to servo yet?

D: Oh yeah, servo is awesome. The cookies are phenomenal. I’ve been a couple of times, and I will probably go today.

Claire Healey '18 is a sociology major with a minor in education. She is currently the editor of the sports section and has been a staff writer for the sports section since her freshman year. She is a member of the Alpha Omicron Pi sorority and has served on their executive board for two years. She also volunteers with the Challah for Hunger organization on campus.