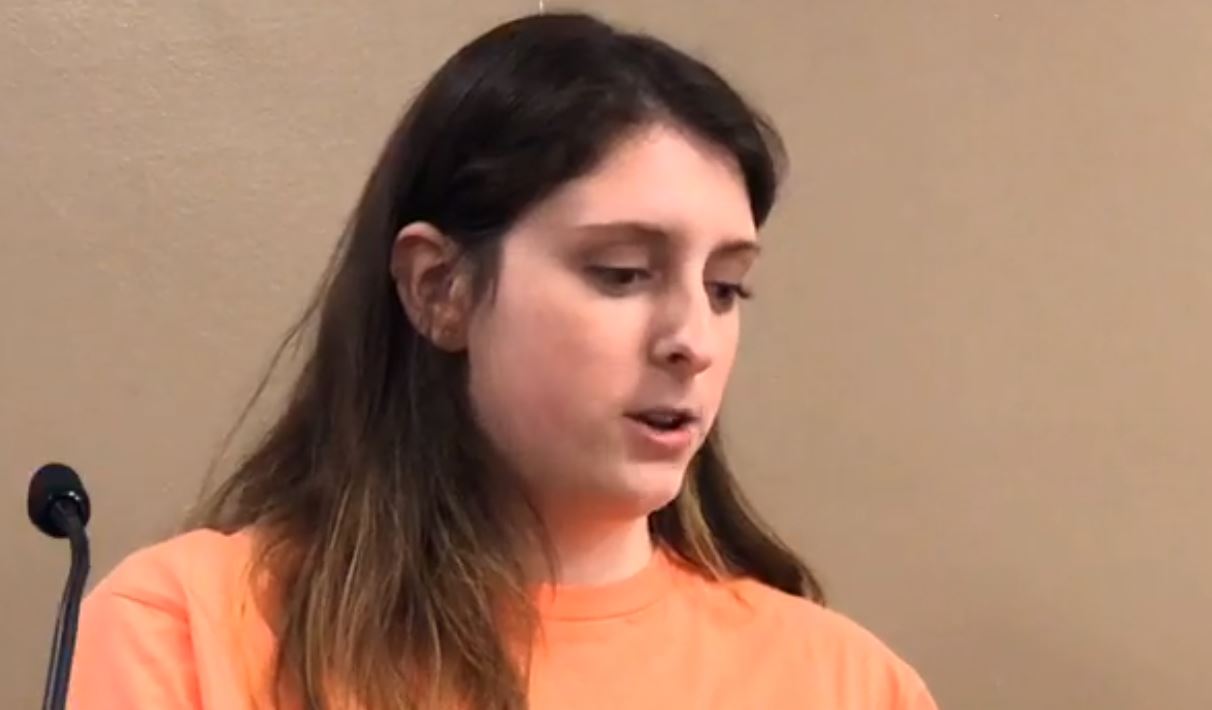 Haley Gluhanich at the appeal hearing on April 23, 2018 (Screengrab via Gettysburgian livestream)

After one election, Haley Gluhanich ’19 was set to be Student Senate’s president and Nick Arbaugh ’20 was to be its treasurer. Now, the roles are reversed.

Arbaugh, who was elected president in the second balloting after Gluhanich, who won the presidency in the original election, was barred from running in the second balloting after an investigation found her responsible of committing election infractions, confirmed to The Gettysburgian that he used his prerogative as Student Senate President to fill vacancies on the executive board and made the decision to appoint Gluhanich as treasurer last week.

The decision came after what Arbaugh described as “healthy discussion” among members of the executive board. Gluhanich was one of three applicants for the vacant position, which Arbaugh resigned upon his election as president.

“We wanted a candidate with experience, with integrity, and with new ideas to streamline Senate,” Arbaugh, who supported Gluhanich’s candidacy for president in the first round of balloting, said. “We found that in Haley.”

Arbaugh downplayed the role of the election investigation earlier in the spring as a factor in his decision.

“Candidates were judged on their individual merit and the value of what they could bring to the table,” he said, adding that the result of the investigation “wasn’t a major factor in the decision.”

The other two candidates were Alexander Xie ’20 and Harrison Curtis ’19.

Xie served as a senator for the Class of 2020 before he was removed from office due to violations of the attendance policy; he subsequently ran for both president and secretary in the second round of elections, but was not elected to either position. He did win election as a senator for the Class of 2020 after appearing as the only candidate on the ballot for the fall and one of four candidates seeking to fill the four slots in the spring. In an email, Xie said that he does not have any concerns with Gluhanich’s selection, and he intends to move forward as an elected senator in the fall.

Curtis served as a senator for the Class of 2019 in the fall semester of 2017-18 academic year, but was off campus during the spring. He did not immediately respond to a request for comment on his plans moving forward, but he was not a candidate for senator in the fall.

For her part, Gluhanich said she looks forward to moving past last spring’s investigation and returning to “something I love.”

“I would like to believe that I am very resilient person, so just because I was no longer allowed to be Student Senate President did not mean I was going to stop doing something that I enjoy,” she said.

She cited improving accountability procedures for club spending and “help[ing] clubs be more fiscally responsible” as primary goals for her tenure as treasurer.

The Senate Treasurer serves as chair of the Budget Management Committee (BMC), which oversees Senate’s annual budget for new initiatives. For the 2017-18 academic year, that budget was $91,511. BMC hears and approves budget requests before they go to the full Senate for a vote. As such, the BMC exercises significant authority to revise and pare down club budgets, which happened with increasing frequency during the 2017-18 academic year. Whereas Senate dipped into its rollover account for $23,000 at the end of the 2016-17 academic year, it had leftover funds at the end of 2017-18, of which it spent $20,000 to purchase and install eight new water bottle fillers and $2,500 for charitable contributions.

“I believe that when clubs follow all the steps in a proper time frame,” she said, “Senate will be able to flow even more efficiently.”

As for other plans while a member of the Senate Executive Board, Gluhanich expressed a desire to add more clarity to the Senate Bylaws and Constitution after her experience last spring, which centered on whether knocking on students’ doors with the digital ballot in hand constitutes “voter intimidation.”

Both Gluhanich and incoming secretary Marisa Balanda ’21, who went door-to-door with Gluhanich and was also found responsible for violating election procedures but was permitted to stand for election in the second balloting for secretary, have expressed a desire to codify those procedures.

“I think by changing very vague procedures within the Constitution and Bylaws to be more detailed would be a good start,” Gluhanich said.

With Gluhanich duly appointed as treasurer, the Senate Executive Board is now fully constituted. Vacancies remain for three senators to represent the Class of 2020 in the fall as well as for several class officer positions both in the classes of both 2019 and 2020. Those positions will be filled in the fall.