Men’s Track and Field Races to Second in Home Invite 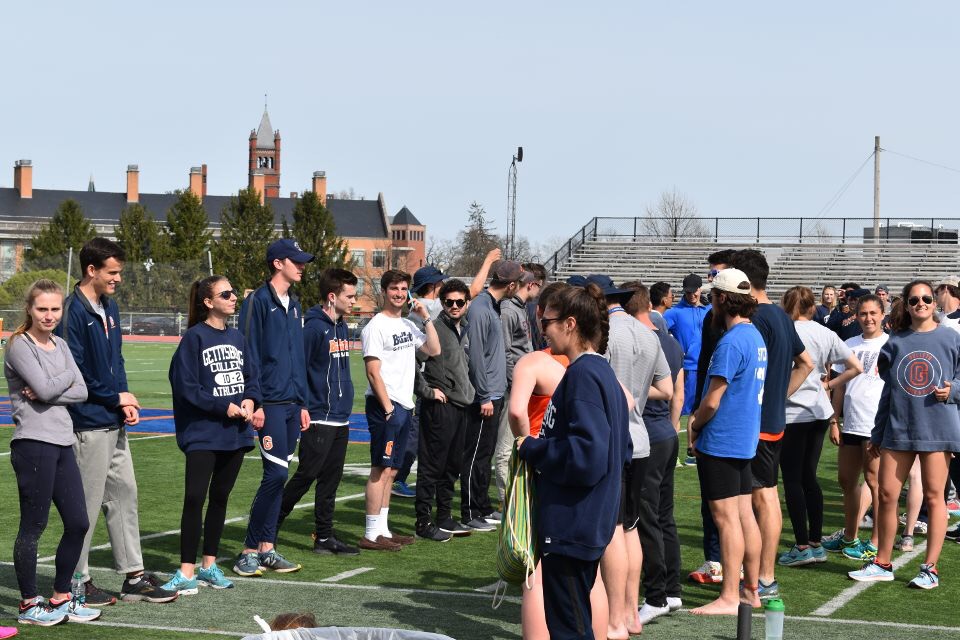 The invitational was the lone home meet for the Bullets, and the team made sure to show off for prospective students on Get Acquainted Day.

Frostburg State and McDaniel College rounded out the top five spots with 108 and 76 points, respectively.

Abdul-Karim also placed third out of 45 competitors in the 200-meter dash with a time of 23.02 seconds. This is Abdul-Karim’s second season with the team.

First-year Nicholas Grissinger finished first of 15 competitors in the 400-meter hurdle competition with a time of 57.44 seconds. This time is a new personal record for Grissinger and his second event win of the season.

Grissinger beat out his nearest competitor by nearly two seconds.

Junior Mike Miller earned runner up recognition in the 10,000-meter run with a time of 34:47.58 minutes, which qualified him for the Centennial Conference Championships next week.

With a distance of of 21-3 1/2 in the Men’s long jump, sophomore Kenneth Barnes took third of 28 in the competition.

Sophomore Nate Trinidad Doherty finished third of 27 in the Men’s Javelin with a score of 152-3, and, with a jump of 40-5 ½, junior Joe Amadio was third of 10 competitors in the Men’s triple jump.

Junior Matt Robinson placed fourth out of 15 competitors in the one-mile run with time of 4:31.18, respectively.

The historical Mason-Dixon mile was dominated by members of the Gettysburg track team.

Positions four through nine were filled by the Bullets.

After the one-mile competition, Petrecca returned to the track to take fifth in the 800- meter run with a time of 2.52 minutes, respectively.

Junior Thaddeus Cwiklinski raced to sixth in the 400-meter dash with a time of 51.95 seconds.

Towards the end of the meet, a brief break was taken on the track to honor the graduating seniors.

Six Bullets will leave the Gettysburg Men’s track team in May.

Covering all events, these Bullets are co-captain Thomas Clark from the multi, co-captain Robert Weisensee in mid-distance, Abdul-Kharim in sprints, Ryan Thompson in sprints and jumps, and Harry Thoman and Caleb Parker from the distance squad.

In an interview for Gettysburg College Athletics with Braden Snyder, Clark said, “we have a lot of athletes and depth that are dedicated and willing to step out of their comfort zones by participating in different events to help the team. Also overall the dedication of our athletes between our break and now shows that everyone put in work and are ready for this season.”

The performance at the home invitation serves as proof to Clark’s statement.

The Gettysburg College Men’s Track and Field team will end its regular season in a final tune up before Centennial Conference Championships at Shippensburg University this Saturday at 9a.m.