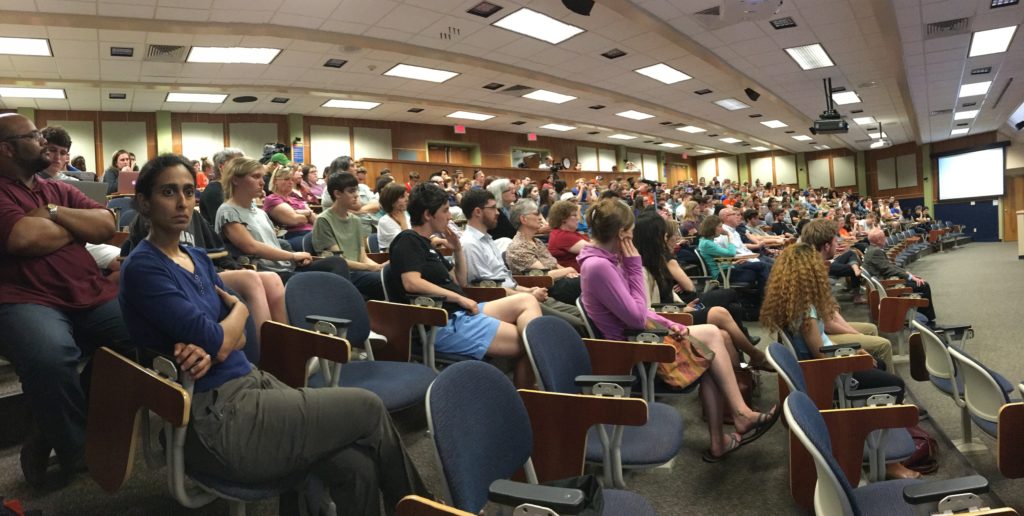 Commenting that it was “the most faculty she’s ever seen at a faculty meeting” and that they “can finally approve the last six years of minutes,” President Janet Morgan Riggs stood in shock Thursday in Mara Auditorium as the Kahoot! digital voting system showed that at least fifty percent plus one of those who have faculty voting status were present at the start of the meeting.

“It is really great to see that the faculty have decided to become engaged in the process of governing the institution again,” Riggs said.

“We need to use our campus spaces effectively, and putting 20 people in a room that can hold 300 is grossly irresponsible,” Zarella said.

Zarella said that she is not concerned about upsetting the faculty with the move to the CUB 230 conference room.

“I don’t care that it’s the faculty…maybe I’d be more willing to work with them if they could figure out how to submit a 25Live request earlier than three hours before they need a space.”

The attendance issue came to a head at last week’s faculty meeting when Char Weise, Professor of Economics and Chair of Faculty Council, stood up and announced that they have to actually get something done.

“We’re going to have to vote on these motions at the next meeting, so I would encourage you to tell your colleagues to come to faculty meetings, especially the ones for the rest of the semester, or else we won’t be able to do the business of the faculty,” Weise said. “It’s their job.”

“I don’t want to go to the Board of Trustees with a [Freedom of Expression] philosophy statement and tell them that there weren’t enough faculty who came to the meeting to vote. That would be really embarrassing,” Riggs said.

Riggs closed Thursday’s faculty meeting by begging the faculty to come back for the April 5 meeting, and announced that to encourage even greater participation future faculty meetings would be fully catered.

“You know what? We are going to make the meetings Host Provider too!” Riggs added in desperation.