Home » Opinions » Please Get Real. This Happens Too Often. Please.

Please Get Real. This Happens Too Often. Please. 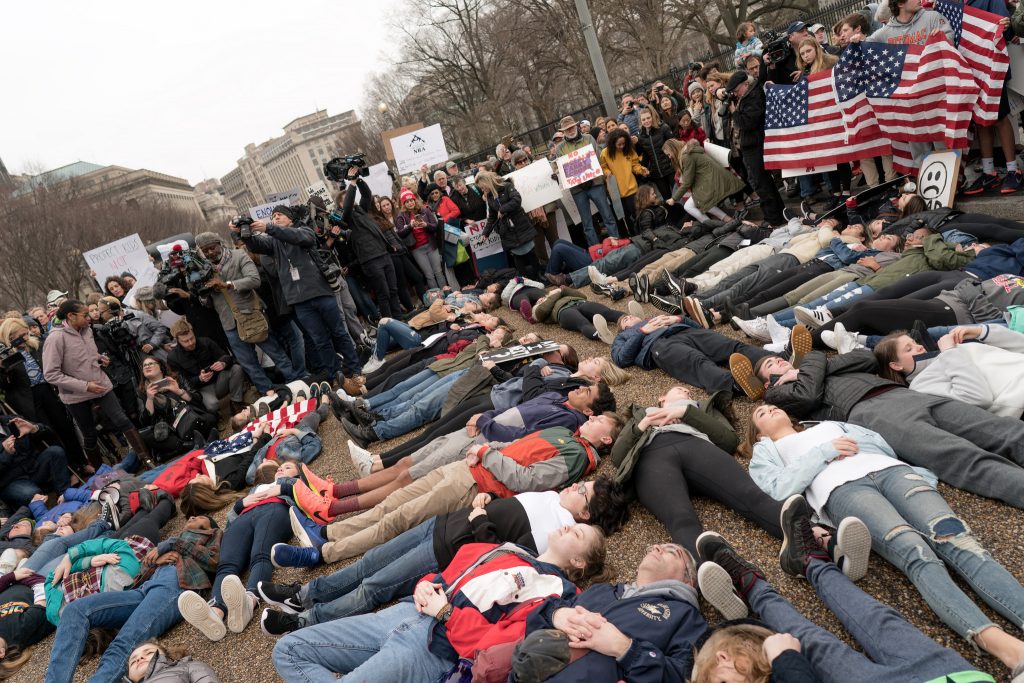 Students lie-in at the White House on Feb. 19 to protest gun laws. The demonstration was organized by Teens For Gun Reform, an organization created by students in the Washington DC area, in the wake of Wednesday’s shooting at Marjory Stoneman Douglas High School in Parkland, Florida. (Photo Lorie Shaull/Flickr)

If you are reading this, I would assume that you have at least seen the link to Mr. Chris Condon’s op-ed. I will be responding to it and would kindly ask that you take a few minutes to read it. In addition, I would also strongly advise any readers to also refer to Mr. Zachary Sobeck’s recent article, which sparked this debate on the op-ed pages of The Gettysburgian. While I give him brownie points for calling for action, I will be briefly rebutting his policy proposals.

Before addressing the loose argument presented on the constitutional interpretation of the Second Amendment, I would first like to address the bevy of references to the Framers that underpin the philosophical components of Mr. Condon’s argument. I suppose the best way to do so is by starting with this comment:

“Is our nation not founded on the proposition that all men are created equal?”

Not in the slightest. Sure, Jefferson wrote it. That doesn’t make it a fundamental and followed principle of our country. Jefferson himself didn’t even follow it. He owned slaves. A lot of the Framers owned slaves. More to the point, I would recommend that Mr. Condon ask that question to persons of color, women, members of the queer community, individuals with disabilities, etc. What answers does he think he will get? As a queer person, my answer is an assured “nope.”

My point is this: while the Framers had some good lofty ideals, they weren’t as great at following them to the tee as college-age libertarians (or anyone looking for a good hook for an POL-101 paper) expect them to be followed. They did, however, leave their lofty ideas as baselines, open to interpretation, adaptation, and change to best suit the needs of the era through the lawmaking process, Article V of the U.S Constitution, the 9th Amendment to the U.S Constitution, and a system of judicial review by learned and currently living judges. For that reason, the Constitution is a living document. While we shouldn’t scrap it, we should dispense with this fiction that the only valid authorities on it are the group of white men who wrote and initially ruled with it in the late 1700s and early 1800s. Those who place reasonable restrictions on the words of the Framers have legitimate reasons to do so, their intents just as relevant as those of the Framers.

For instance, due to modern judicial interpretation and understanding, the Free Speech Clause is subject to reasonable time, place, and manner restrictions, many of which take public safety into account. Additionally, unlawfully obtained evidence under the Search and Seizure Clause is admissible in court if one can prove that, without the unlawful search, it would have been inevitably discovered under normal police procedure. This balances the public safety needs inherent in criminal justice with constitutional protections.

Similar restrictions ought to be put in place for the Second Amendment, starting with the ideals of the Framers as a baseline. Yes, Mr. Condon is correct in his assessment of the original goal of the Second Amendment, writing: “By attempting to ensure that the general citizenry would have access to arms for their own defense, the founders solidified their belief that Americans would never again be forced to kneel to the whims of a militaristic executive that expands beyond its purview. In essence, the right to bear arms is the mechanism by which the framers protect the other rights, placing this tool in the hands of those it seeks to benefit most.” However, the modern policy implications of their intent are unreasonable. The Framers were unaware of modern weaponry and the arms disparity between citizen and government. Unless Mr. Condon desires to provide citizens with automatic weapons, bomb-making materials, and the occasional nuclear weapon, the government, as an entity, has no reason to fear a citizen rebellion. Instead, we are left with the perfectly valid modern intents of individual protection in emergency situations and sporting as constitutionally-protected activities. As we have done with many other rights, one can easily balance the needs of public safety with a 21st century interpretation of the Second Amendment.

Mr. Condon is woefully incorrect in his description of a balanced Second Amendment. He writes about “arbitrary conceptions of mental illness without so much as an appearance before a judge” as the system of restricting access to firearms for dangerous individuals. First off, an overwhelming majority of individuals struggling with mental illness pose no danger to society and would therefore be unaffected by any potential law. Second, conceptions of mental illness are far from arbitrary. Please refer to your nearest copy of the DSM-V (Diagnostic and Statistical Manual of Mental Disorders) for proof of my claim. Finally, the process for depravation of the right to own a firearm would most assuredly include an appeals process in front of a judge, as is the case with all other depravations of constitutional right.

Instead, a balanced Second amendment would call for reforms necessary to better protect public safety. Unlike what Mr. Sobeck says in his original article, an assault weapons ban is constitutional and was in effect from 1994 to 2004, when the sunset clause went into effect. Also, a ban that encompasses the AR-15 would surely be an effective preventative measure to protect against a massacre by someone wielding an AR-15. In addition, Mr. Sobeck fails to mention banning bump stocks, closing the gun show loophole, and pressuring states and agencies to participate in the National Instant Criminal Background Check System (NICS). Finally, unlike reforms that deprive access on an individual basis (like the ones Mr. Sobeck proposes) broad-based reforms are more effective in that they have less cracks to fall or crawl through.

Quite frankly, I’m tired of the inaction on this public safety issue based on a narrow and insufficient reading of the Constitution or an unwillingness to moderately limit generalized access to a lethal weapon. I’m tired of getting alerts on my phone that another community has to publicly grieve. I’m tired of fearing that the community I live in will be next.