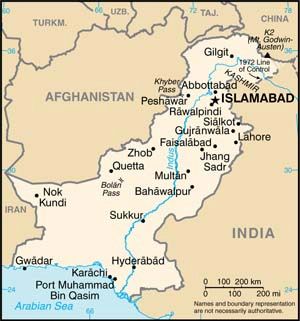 Since the 2001 invasion of Afghanistan, American security forces have provided substantial security to Pakistan and worked with Pakistani troops and intelligence to combat terror in West Pakistan and Afghanistan. The Trump Administration’s freezing of $900 million in security aid to Pakistan did not capture front-page headlines or endless cable news coverage the way the President’s nuclear saber-rattling or Michael Wolff’s new book have.

In truth, most Americans probably dismissed the news entirely. After all, North Korea, Afghanistan, and Don Jr.’s meetings with the Russians are far more pressing matters that could impact the American public, right? Actually, our Pakistan policy is far more consequential than just pulling security aid over disagreements on how to combat terrorism. Pakistan not only serves a larger role than most Americans understand, but is the greatest risk to both American national security and international stability.

The President claimed that the aid freeze was due to Pakistan’s poor track record in helping the U.S. fight al-Qaeda and the Islamic State. While they may be difficult partners at times, it is better to play the game with a cheater, than not to play the game at all. Pakistan has a concerning history of connections to terrorism, especially within its intelligence services (the ISI). Even though we have had to bribe security forces for their services, they have been helpful in tracking down and eliminating terror threats in Pakistan and Afghanistan since September 11th, 2001.

More important is Pakistan’s strategic geography in the war in Afghanistan. American troops have used Pakistan as a launching point from which to engage threats on the Pakistani-Afghan border.

Furthermore, Pakistan has (reluctantly) tolerated U.S. drone strikes in its largely ungoverned western provinces. Those provinces serve as a hideout for terrorists who escape from U.S. forces in Afghanistan. They simply hide in west Pakistan because the government will not extend its resources to find them. Osama bin Laden used this tactic until the American government authorized a Navy SEAL incursion into Pakistani territory to find and kill him. While increased incursions have shaken our relationship with Pakistan, completely ending security funding to the country will make the war on terror that much more difficult for American soldiers to fight and win.

So often in American political discourse, we speak of the dangers of a country like Iran gaining control of nuclear weapons and ICBMs. Politicians worry that, as a sponsor of terror groups such as Hezbollah, Iran could sell terrorists a nuclear bomb to detonate in Israel or the United States. This is a real danger, and we should put our best efforts into keeping Iran from going nuclear.

Pakistan, however, receives far less public scrutiny; even though it is an Islamist government (like Iran) that, according to The Fund for Peace, ranks 17th in least stable governments in the world, and is already in possession of nuclear weapons. This should give the American government reason to continue a relationship that provides stability to Pakistan, rather than withdrawing because they unfairly take advantage of our support. Pakistan is particularly worrisome because of its instability as well as the ISI’s suspected ties to terrorists.

The developing world is becoming less predictable due to extreme fluxes in weather and natural disasters. If a drought were to strike Pakistan this year, causing several years of famine, the way it did in Syria in 2010, what is to stop the country from disintegrating into violence and civil war? Civil war could ultimately lead to state collapse. There is no more terrifying scenario than the collapse of a government in control of over one hundred nuclear weapons.

It is not difficult to see the possibility of those weapons falling into the wrong hands. Perhaps hands that would sell the weapons to terrorist organizations. If a nuclear bomb were to go off in Manhattan, or any other city in the world, it would fundamentally alter American and international policy forever. The United States must never lose track of Pakistan’s nuclear arsenal. For all of the bluster over Iran, which does not have nuclear weapons and will not have them in the foreseeable future, we are dangerously negligent of the prospect of Pakistani civil strife. It is important for the United States to continue providing security aid to Pakistan in order to keep American intelligence inside the country and to try and maintain some form of stability. Freezing all of our security aid to the country is a step in the wrong direction.

Let us take a step back now and examine the regional and global implications of America turning its back on Pakistan. China is rapidly gaining on or surpassing the US in economic and military metrics, and their One Belt One Road initiative is increasing their influence in the developing world every day. While most analysts agree that China is not yet ready to become the world’s leading power, it does appear that China is ready for hegemony in its region.

China has announced that it intends to invest $46 billion in Pakistani infrastructure, finance, and security through 2030. That is more than the US spends on all foreign aid per year combined. Although President Xi Jinping has only concretely agreed to spend $28 billion so far, it is still a massive investment into one country. Because of its investment, China’s already strong relationship with Pakistan, will only be strengthened.

Chinese influence in Pakistan is a problem for the U.S. because it hurts our international interests as well as the interests of the region’s largest democracy: India. India and Pakistan have been to war four times since the Partition of India in 1947 and remain bitter enemies to this day. China sees India as a competitor that may, along with the U.S., attempt to shape and limit China’s rise to Asian dominance.

For that reason, China has helped strengthen India’s Muslim rival both for strategic purposes and to simply agitate Prime Minister Modi and his Hindu nationalist government. This is especially dangerous considering the fact that India and Pakistan are both nuclear-armed nations. A conventional or nuclear war igniting between the two over the Kashmir or clean water access is not out of the realm of possibility. Any prospect of nuclear war should frighten every responsible actor on the world stage.

Giving in to Chinese influence in Pakistan is also problematic for the United States because it will inevitably weaken American influence in South Asia. Such abdication of influence could be seen by the Chinese as a sign of weakness. American unwillingness to work with a “cheating” Pakistan could embolden the Chinese to exert their influence more throughout South Asia and the Asia Pacific. One of America’s greatest foreign policy fears is being drawn into a conflict with China over the South China Sea or Taiwan. America could also be drawn into conflict while defending India against an aggressive China. Abandoning security funding in Pakistan could set us on a path to one day have to either accept Chinese regional hegemony, or fight to deny it.

While some of the fallout that from this small policy change towards Pakistan may appear alarmist and unlikely, it is better to be imaginative when evaluating risks as opposed to reflecting on how one could have prevented a catastrophe. Due to the potential consequences of instability and conflict within Pakistan, it is the greatest national security threat the United States faces today.

Freezing security funding to them will make it more difficult to fight terror in Afghanistan. It also makes it more difficult to ensure relative state stability that keeps nuclear weapons from falling into malicious actor’s hands. Furthermore, turning our back on Pakistan opens the door for tremendous influence from China, whose familial relationship with Pakistan could have intense geopolitical implications for both India and the U.S.

Smaller countries are not always going to play by our rules. President Trump must accept that living with and trying to mitigate their cheating is safer and more responsible policy than abandoning them altogether. Pakistan is far more important to American national security and international stability than the President may realize. Therefore, abdication of American responsibility and influence in Pakistan is a mistake.