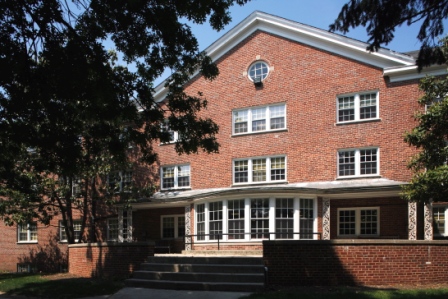 An email from Associate Dean of College Life for Residential and First-Year Programs Keira Kant sent last week indicated that precautionary air quality tests conducted on the first, second, and third floors of Hanson Hall did not indicate any issues and remediation work would not begin until the conclusion of the semester. However, today, Kant sent another email to remaining Hanson Hall residents stating that, on the recommendation of Compliance Management International, an environmental consultant retained by the college, remediation work would begin immediately.

“Air quality assessments were normal or typical for an indoor environment. Visual assessments revealed mold conditions were present in the first and second floors and limited areas of the third floor,” Kant’s email said. “[W]e have chosen to be proactive in addressing this issue and take action based on the recommendation of our consultants … [W]e have decided to begin work on the basement today and will continue moving to the upper floors to remediate all affected areas. This work will involve removing water pipe insulation and cleaning affected ceiling cavities and hard surfaces of affected rooms.”

The college has contracted INX Technology Corporation of PA, a bioremediation professional, to conduct the cleanings. Each floor will take about two weeks during which residents will not have access to their original rooms, but can leave many of their belongings behind.

“Support will be provided to move your belongings, and we will work to minimize any disruption as much as possible,” Kant said. “When your floor is scheduled to be cleaned, you will need to gather enough belongings for a period of up to two weeks.  The bulk of your belongings can remain in the room.  We will ask you to box any items on the floor or on horizontal surfaces.  We will provide boxes for this purpose. The boxes can remain in the room. The professional team will cover all items left in the room.  You will get more information about this as we get closer to the move, including a proposed checklist of what belongings you should be sure to take with you.”

Kant promised Hanson Hall residents that the college will “work closely with you to make this process as manageable as we can.”

According to Jamie Yates, Executive Director of Communications & Media Relations, students will not begin moving for 10-14 days as basement cleaning just began. Students who originally resided in the basement will not be required to move back there after all cleaning is done because they have already had to move twice, she added.

The college has been working to consolidate rooms in other residence halls to make room for displaced Hanson Hall residents, and some residents briefly lived at the Gettysburg Hotel while the college worked to find them permanent on-campus housing.

“This should have been solved earlier over break. It’s irresponsible and unfair that we have to suffer the consequences,” said Hanson Hall resident Lauren Sherman ’21, who said she has cold symptoms, but, obviously does not know for sure if the mold is a factor. “It makes me feel physically ill to be in my room, but I don’t have anywhere else to go.”

Yates said that, to date, the college has no knowledge of any students experiencing adverse health effects due to the mold issues.

“With the exception of medically documented mold allergies, there is really no way for us to track health symptoms directly attributable to presence of mold,” she said. “We recommend that anyone with health concerns contact or visit the health center.”

Sherman also noted the hassle of having to move temporarily.

“It’s inconvenient,” she said. “Whereas the the students from the basement are settled now for the semester, we’re just being moved wherever they can fit us temporarily.”