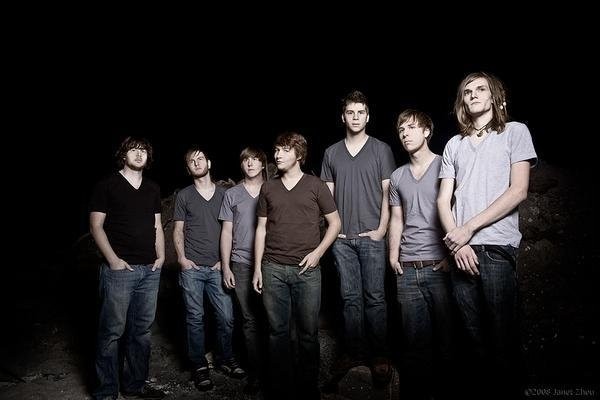 I went into Harmony Cure by Captain Squeegee, a psychedelic rock band from Arizona, expecting weirdness based on their name alone, and I was not disappointed. As I scrolled through the internet, the moniker of the band was what initially caught my attention, but their unique sound was what prompted me to stay and keep listening. Harmony Cure melds together ska, jazz, and rock, but it also aims to tackle themes like the meaning of music, protecting the environment, and depression. This colorful ep is packed to the brim with enough off-kilter oddness to make one dizzy.

The opening track, “Our Children,” immediately addresses the title of this project. The “harmony cure” refers to music and its power to bring people together. The song is filled with funky bass, fat saxophone, and a popping brass section. It’s the type of song that makes you want to get up and move. Danny Torgersen’s spaced-out vocals pull the song forward as the horns and electric guitars drive the rhythm. Another highlight is a guitar solo about halfway through the song that tumbles over itself into a crescendo resembling a digital overload.

The track takes an odd turn however, when the subject matter of the song abruptly shifts to aliens. Captain Squeegee throws aliens into the mix because that is what their fans expect of them, not because aliens are necessary to this song. It’s a shame because this non sequitur detracts from the overall message of the song, which I really liked up until that point.

My favorite track on Harmony Cure is “Terrorist of Time,” one of the more upbeat songs and the track that brings the most ska-flavor to the ep. Lyrically, the imagery in this song stands out as provocative and socially conscious. The implication here is that the terrorists of time are us. We have polluted the water, destroyed the forests, and lost our ability to appreciate the beauty of nature. Although this is hardly a revolutionary or new declaration, the song works because it never explicitly says “We are killing the environment! We are the bad guys!” Instead, it lays out the evidence for the listener and lets them ascertain for themselves who the “terrorists of time” really are.

Unfortunately, the same can’t be said for all of the tracks on Harmony Cure. “Smile Shield” in particular suffers from the band thinking it’s much deeper and profound than it really is. The image of hiding behind fake smiles is a stale and overused cliché. Captain Squeegee seems to think that they are “red-pilling” the masses, but instead come across as angsty and shallow.

The closing track, “Ghost Ships,” brings the message about the significance of music full circle. One lyric that resonated with me was, “we use different hearts, but the art makes us feel the same.” This statement on the ability of art to make us empathize better with each other is what Harmony Cure is all about. It also doesn’t hurt that the song is catchy and makes great use of dynamic contrasts.

At its best, Harmony Cure offers interesting critiques of society and heartfelt statements on the importance of music. At its worse, Harmony Cure stumbles as it tries too hard to be “woke.” But even when concepts behind songs don’t land perfectly, Captain Squeegee’s latest is undeniably fun. From wildly funky beats, to fusion jazz flourishes, to keyboard breakdowns, this album has a little bit of everything for everyone. Besides aren’t you curious what a band named Captain Squeegee has to offer?