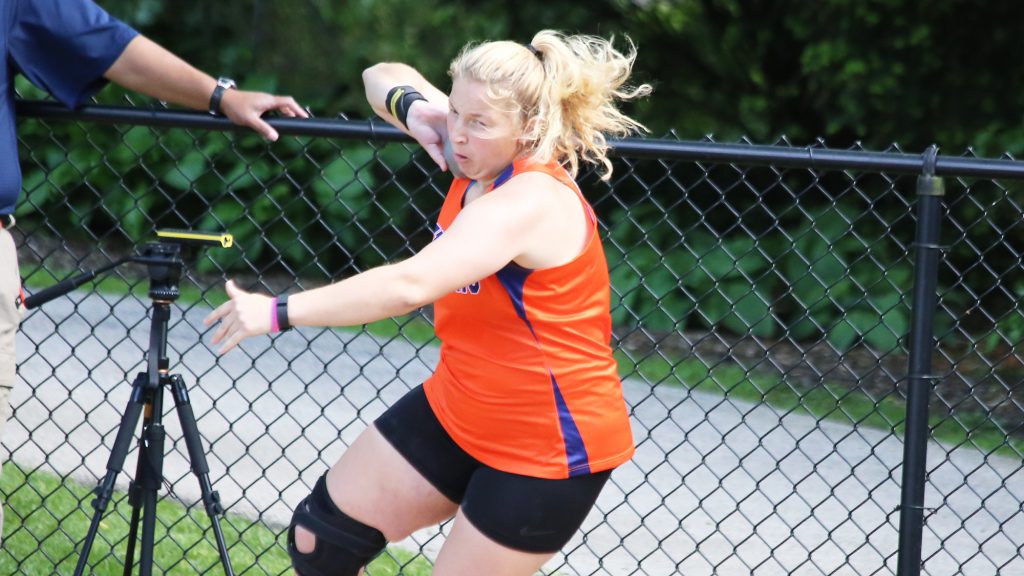 The Gettysburg College Women’s Indoor Track and Field team opened its season at Franklin and Marshall College at the Diplomat Open this Saturday. The partial squad had a successful day across the board beginning the season with many strong performances against conference foes.

The partial group was without the majority of the distance team, who are on break from the cross-country season.

The throwing team opened the season with strong performances in both the shot put and the weight throw. Senior Mikaela Collins broke the school’s shot put record with a throw on 41 feet 3 inches, and finished fourth on the day out of 62 throwers. The throw was a big personal record for Collins. She is the first Bullet to pass the 40 feet mark in school history.

“I was shocked and was not excepting to break the record going into the meet,” said Collins.

Collins does not think that this mark is as far as she will go, however, nor does she think the team’s performance at Franklin and Marshall is the equivalent to what will come later in the season.

“We have a strong team this year, and I expect we will continue to progress,” she said.

Taylor and Horst put up strong performances in the weight throw as well. Throwing 12.81 and 12.66 meters respectively, the duo both placed in the top five throws all time for the program.

Sophomores Abigail Rec and Emily Wielk also finished under the Centennial Conference qualification mark of 1:07.59. For the Conference championships, only runners under the mark can run; so Gettysburg now has three 400-meter racers ready for the February competition.

Congdon and Rec also both ran qualifiers. Rec finished with a time of 10.73, worthy of 27th place.

In the 800-meter competition sophomore Sullivan Desmond, and senior Kimberly Corcoran ran 2:44.14 and 2:47.84 respectively. The result was a personal record for Corcoran, who is in only her second season as a Bullet tracklete after a semester abroad in Australia last spring.

This race was the first time Corcoran would try the 800-meter race, after typically being a shorter sprinter and jumper.

The Centennial Conference predicted the Bullets to place fifth in the Conference Championships in preseason poll. The conference coaches vote on the order based on previous years, and fifth is where the Bullets finished last year.

“I hope (for the team) to place higher than last year,” said Collins.

Being an invitational, there was no specific team scoring Saturday. The Bullets did face a lot of Centennial Conference competition. Aside from Franklin & Marshall, second-place-predicted Dickinson College, seventh-ranked Ursinus College and ninth-ranked Bryn Mawr College were all in attendance.

With 10 first years added to the mix, the young team could pose a threat to other competitors.

Most of the graduated students from last year were distance runners, so the true test will be when the full squad convenes next semester.

The full team will return to action after the month-long winter break on Saturday, January 27, at the Lehigh John Covert Classic hosted by Lehigh University.