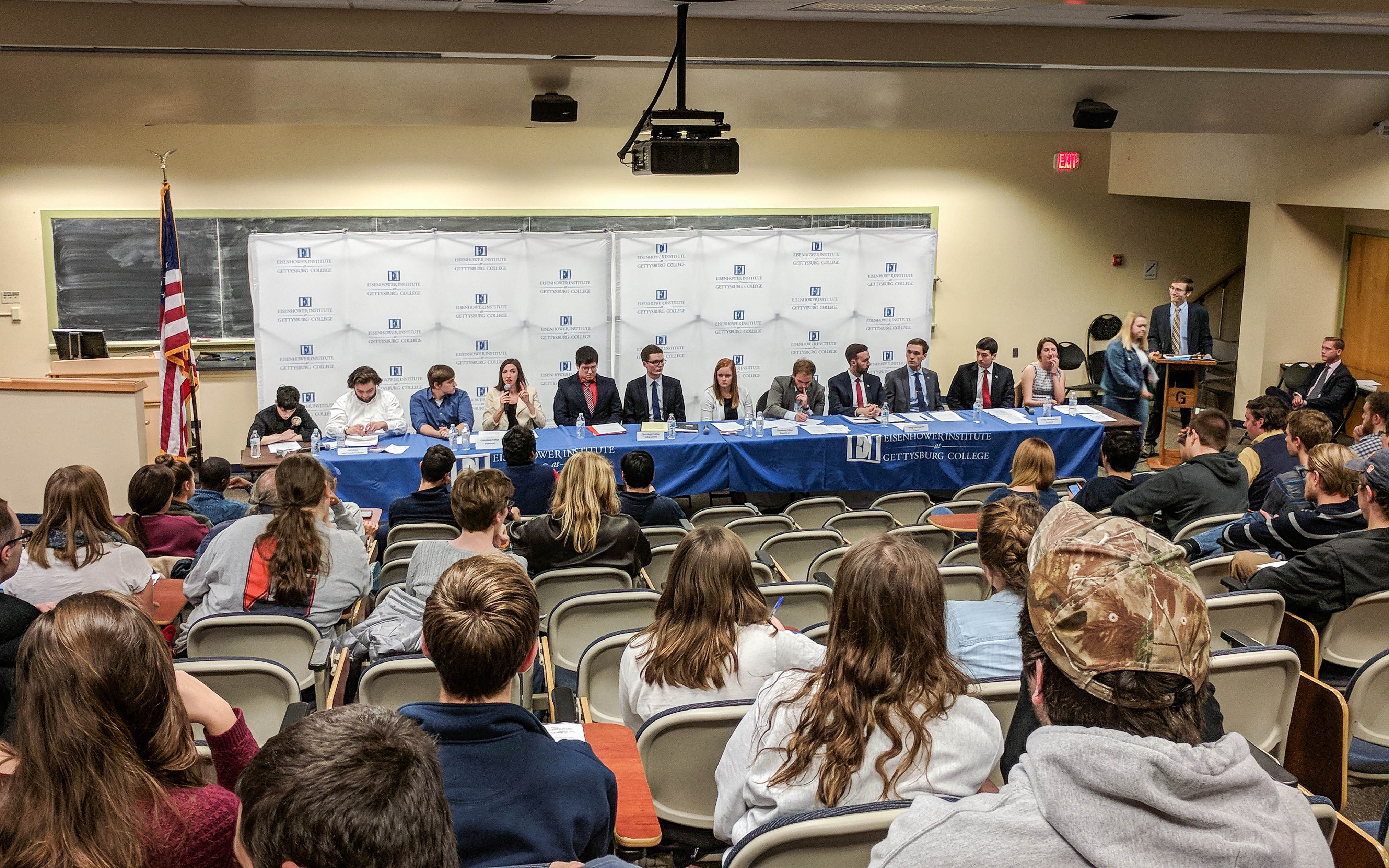 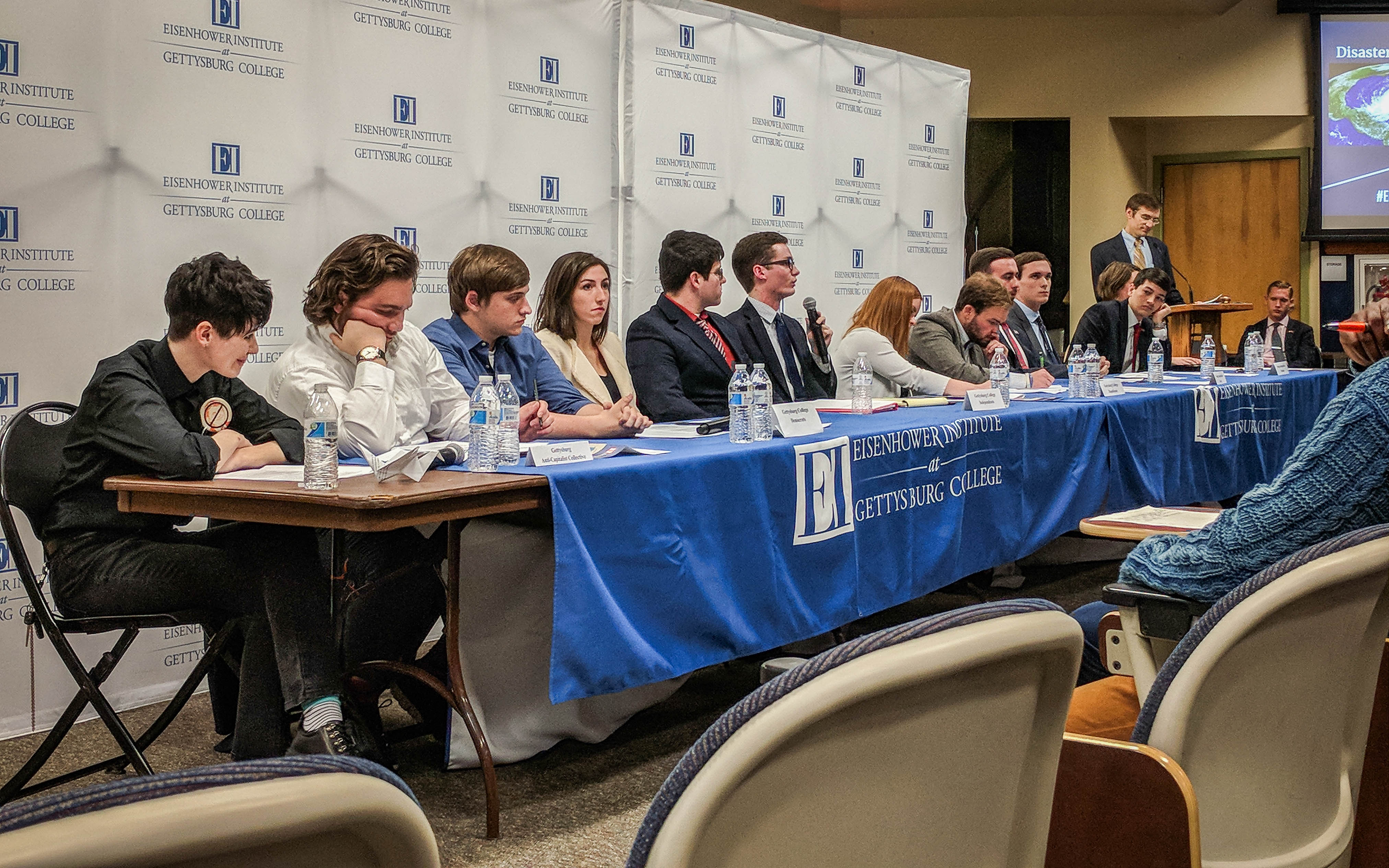 Each group was given one minute to promote their clubs and offer the audience insight into the core values of the group. YAF is ideologically conservative, but emphasized that they understand change and want to measure and allow change to further individual freedom. YAL is the Libertarian group on campus (socially liberal but economically conservative). They valued maximizing individual freedoms through issues such as criminal justice reform and cutting taxes. College Republicans focused on ensuring that the government protects rights outlined in the Constitution without giving the government too much power. The Independents focused on being bipartisan and moderate, with their specific political values being based on their members’ beliefs. The Democrats focused on the local community impacts of their group, and promoting issues dealing with subjects like equality, economic justice and criminal justice reform. GACC is to the left of the Democrats and are skeptical of the “order of the day,” expressing curiosity about post-capital societies.

After all of the groups had been introduced, Page outlined the format of the debate—each group is given one minute to answer each question (some of which are predetermined, while others are posed by the audience), then a 30 second rebuttal of others’ responses.

Page opened the debate with a question on gun control and how to reduce the mass shootings that seem to have become common recently. All of the groups (excluding GACC), seemed to agree that the government should protect the Second Amendment right to bear arms, but should impose some stricter regulations on gun laws.

YAF suggested restrictions such as banning bump stocks and expanding the misdemeanors that disqualify people from owning guns. YAL agreed, emphasizing that the mass shootings are not matters of gun control, but instead are issues with mental health care in the United States. They suggested controlling the mental health crisis, criminal justice reform, and ensuring rehabilitation services are available for those with mental health issues. The College Republicans agreed, and encouraged limitations like stricter background and mental health checks, but also promoted the protection of Second Amendment rights. The Independents stated there was no easy solution to the issue, but encouraged keeping weapons out of the hands of the mentally ill and criminals. The Democrats agreed, and were in support of the stricter background checks that YAL suggested. The Democrats mainly emphasized that the government should do something to ensure stricter gun regulation instead of simply ignoring the problem. GACC, on the other hand, held the opinion that the real issue at hand is demilitarizing the police, as minority deaths at the hands of police officers have only increased recently, and focusing on eliminating toxic masculinity in society. They proposed a community based approach to teach healthier means of expressing masculinity and mental health care support. YAF strongly disagreed with this approach, stating they were unsure how that could work in society. YAL and the Republicans agreed, and felt that demilitarizing the police was not an option.

Page then asked the groups how the government should prepare and respond to natural disasters. YAL began by saying the federal government is important in this issue, but can also get in the way, as seen through the Jones Act which merely slows down government response. They also strongly encouraged using private charities and state governments to address these issues as they are closer to the issue. The Republicans agreed, citing evidence that private corporations such as Walmart and Dell give much more money for disaster relief than the federal government does, and proposed that the government put money into better protections in coastal areas. The Independents agreed, pointing out that more both private organizations and FEMA should aid after natural disasters. They encouraged more federal money given to both FEMA and levee engineers to alleviate the issues. The Democrats advocated for more support in Puerto Rico, as Puerto Ricans are considered citizens of the U.S., and need more robust funding. They also encouraged climate change action to prevent further disasters. GACC agreed that climate change is a huge issue, and ‘no strings attached’ federal aid should be given to foreign countries. GACC also pointed out that the federal government should give more money to support local businesses that struggle after natural disasters. In the rebuttal, all of the groups agreed that climate change should be addressed and not ignored.

The discussion moved to foreign policy, and the groups were asked to discuss the government’s relationship with North Korea and Iran. The Republicans began, stating that while it would be foolish for the U.S. to start a preemptive strike, they should be prepared to attack North Korea. The U.S. should also encourage China to limit their trade with North Korea, and the nuclear deal in Iran should be revisited, as it does not seem to work, they said. The Independents felt that not much has to be done with North Korea, as they highly doubt North Korea will attack us, they merely use fear tactics. They also felt that the nuclear deal with Iran is working and proves that we can negotiate with Iran, a point that is possibly even more significant than the actual deal. The Democrats agreed with the Independents, and felt that the nuclear deal with Iran is huge and strengthens foreign ties for the United States.

GACC felt that the nuclear terrorism in North Korea is in response to the U.S.’s intervention in foreign countries, and many North Koreans and South Koreans have wanted reunification for years. They felt that what really matters is for the U.S. to sign a peace treaty that formally ends the Korean War. YAF argued that the U.S. should walk away from the Iran deal, as there is no way to check that the Iranians are complying. Both YAL and YAF felt that the U.S. should also put pressure on China to lessen their ties with North Korea. YAL argued that money is the most powerful tool, and the U.S. should negotiate and trade with Iran to open it up to the world stage, a point with which the Democrats later agreed.

The groups were asked whether the government should address the spread of polarizing “fake news” on social media websites like Facebook and Twitter, to which all of the groups responded with a resounding “No!” All of the groups agreed that this should not be a priority of the government, and such sites should not be regulated. If the websites want to take down posts on this issue, that is of their own prerogative. They also agreed that it is up to individuals to hold news to a higher standard and be aware of what is “fake” and what is not.

The groups also discussed health care and whether the Affordable Care Act (ACA) should be changed, and, if so, how. Everyone agreed that the ACA is not perfect, and there should at least be some changes. The Democrats argued that lower premiums, opening government programs, and adhering to subsidies and federal government costs would greatly improve the system. They generally advocated for moving to a single-payer system that benefits everyone. Similarly, GACC pushed for universal health care and a Medicare for All system similar to Canada’s with market-based functions to keep it efficient. The Independents felt it was far too late to repeal the ACA, but cost controls should be reinstituted. On the other hand, YAF and YAL argued for full repeal of the ACA, as it is far too expensive, and allows health insurance companies to have a monopoly of the market. They also pushed for no replacement plan, preferring free market systems. The Republicans argued to repeal but with a replacement, arguing that the market has to control the system, but federal government should provide some assistance. They also advocated for more transparency in the health care system with costs of plans and treatments.

The debaters took audience questions at this point, and were asked to respond to Trump’s tax plan. GACC simply stated that an all progressive tax plan would be much better. The Democrats and Independents generally agreed, pointing out that tax cuts will only lead to deficit. They cited the debt from Reagan’s tax cuts as a prime example, and argued that the drawbacks of cuts would far outweigh the benefits.

Conversely, YAF argued that tax cuts are beneficial for all and help the economy, but felt that the decrease for high-income earners should have been lessened. YAL also generally supported the plan, and argued for a flat tax, more deductions, and a simplified one-page tax plan. The Republicans agreed that the tax was overall good, and decreasing corporate taxes will promote growth. They did not like the inclusion of the ACA in the tax plan, and felt that the plan should just simply be a solidification of the U.S. tax code.

For the final question of the night, the groups were prompted to respond to the unresolved same-sex marriage issues in the U.S., such as parental leave. YAF felt that America is built on choice, and a business is free to choose who they want to serve and whether or not they offer parental leave. If a business refuses service to a group of people, they will suffer backlash economically, so they see no reason why the government should step in. YAL and the College Republicans agreed, stating that everyone deserves social dignity, and the market will punish those who do not serve a specific group. The Independents argued that this approach sounds great, but does not truly work. The free market did not solve racial discrimination, and the solution should be a federal one so that there is uniformity on all fronts, regardless of what that decision is. The Democrats felt that when a group fails to serve a specific group, the government should step in and enforce equality in service. GACC pointed out that there are much larger issues that the LGBTQ+ community has to face, and instead, the government should be abolishing prisons that do not allow queer inmates health care and demilitarizing the police that target these groups.

Overall, the debaters noted that there were many similarities between the groups, and encouraged all Gettysburg students, regardless of their political views, to come to a meeting and see what they are all about. They all welcomed and appreciated the opportunity for open political discussion on campus.