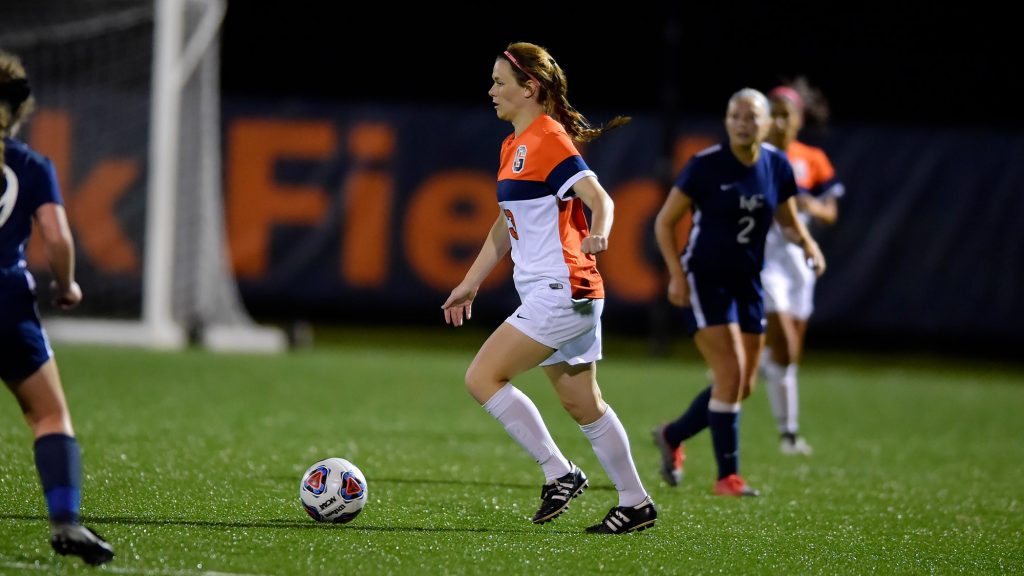 Most recently, Gettysburg has had two wins on the road — first against rival Franklin & Marshall and second against conference opponent Muhlenberg College.

The first game, against Franklin & Marshall, was a strong offensive outing for the Bullets. Senior Krissy Bradley scored the first goal of the game, with assists by juniors Samantha Esposito and Virginia Sanford.

Franklin & Marshall tied things up in the 52nd minute with a goal by Isabella Raspa, but senior Shannon Brady scored a goal with 2:16 left to give the Bullets the win. Senior Maddie Heaney fed Brady the ball for her sixth career goal and third career game-winner.

Competing in the pouring rain, Gettysburg outshot the Diplomats 15-6, which provided an offensive advantage. First-year goalie Kerry Sammon collected a pair of saves to keep F&M off the board late in the game.

The real nail-biter game came in Gettysburg’s second game of the week against Muhlenberg. The game went into a second overtime and sophomore Charlotte Cenatiempo scored the game winner with just 1:12 left.

With one minute left on the clock, sophomore Brooke Priddy took the corner kick to the front pole, and it surprisingly went through the back defenders’ leg. Cenatiempo quickly followed up and scored the precious goal for Gettysburg.

The Bullets outshot Muhlenberg 17-11 and had a 6-3 advantage on corner kicks. Both teams had plenty of shots on goal throughout regulation time and the first overtime. Gettysburg had two shots on goal in the second overtime, one from junior Lauren Miesemer and the final game winner.

Miesemer finished with six shots and four shots on goal, but could not find the back of the net. Heaney and senior Jessica Cuttone also had three shots a piece on offense for the Bullets.

Sammon again had a strong game for Gettysburg. She had six saves and got her fourth career and season shut-out. She has been consistently strong in goal for Gettysburg and has only allowed 15 goals the whole season, with opponents’ goals per game average being held to 1.15.

Cenatiempo’s heroics earned her the honor of Centennial Conference Offensive Player of the Week. With her golden goal and the Bullet’s big win over two conference opponents in a row, Gettysburg moved into third in the conference standings.

If the team continue the way they performed both on the defensive and offensive side in the next four games, they could be playing their first playoff game November 1st. This will be especially important against conference rival Dickinson College in their final regular season game. Dickinson is just one game behind the Bullets in the conference standings.

The hype for the women’s soccer team is at a season high, with the third-place ranking marking an exciting time in the season for the Lady Bullets. Gettysburg is hoping to maintain their current standing and reach the Centennial Conference playoffs again.

Gettysburg will have a number of conference games coming up, including against the undefeated Johns Hopkins and fourth place Dickinson in the next few weeks. Their next game will be against non-conference opponent Susquehanna at home on Wednesday afternoon at 4p.m.

Peter Zhang '21 is a staff writer for The Gettysburgian who writes primarily for the Features and Sports section. He is from Suzhou, China and lived in Los Angeles before coming to Gettysburg where he became a fan of the Dodgers and the Lakers. He is majoring in biochemistry and minoring in computer science.