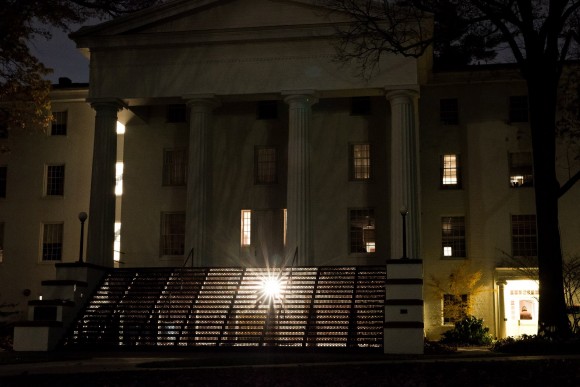 Cut Worms is the musical moniker of Max Clarke. After studying illustration in college with a focus on graphic design and working odd jobs for several years, Clarke decided that writing and recording songs is his true passion. Inspired by a roommate of his who challenged himself to write a song every day for four years, Clarke started by dedicating an hour to music every day in his free time after work. He took it upon himself to write two songs per month, and it is from this process of songwriting that Max Clarke wrote the six tracks that appear on his latest EP Alien Sunset.

The songs on Alien Sunset were recorded with an 8-track recorder by Clarke himself at home. As a result, the whole EP has a rough around the edges do-it-yourself aesthetic. Clarke sings and plays all of the instruments, except for some drum overdubs provided by Josh Condon. The first half of the Alien Sunset was written and recorded in Chicago before Clarke moved to New York City, where the second half of the project was made. Clarke listens to a lot of music from the fifties, sixties, and seventies, which definitely shows in his music. In particular, the style of close harmonies Clarke employs recalls the Everly Brothers. For reference, check out “All I Have To Do Is Dream” by the Everly Brothers from 1958. Lyrically, however, Cut Worms is not so care-free and corny as the music of the fifties. Instead, Clarke takes more inspiration from rock and roll poets like Bob Dylan.

The title track “Alien Sunset” stands out for its interesting layering of multiple parts; bouncy backing vocals, playful strumming, dancing guitar rhythms, subtle bass, and a clap added in for good measure all factor in to make a very complete texture. The song sounds simple and easy going on the surface, but the tune is more complex than it initially appears. This is true of several songs on Alien Sunset. For example, it’s easy to miss the keyboards underneath the melody in the song “A Curious Man.” Little touches like these show that Clarke has an ear for acute details that elevate the songs without you noticing them.

The final track on Alien Sunset is “Song Of The Highest Tower,” which Clarke wrote on the day that Lou Reed died. The lyrics are adapted from a poem by Arthur Rimbaud entitled “A Season in Hell.” This is a melancholy ballad that relies heavily on Clarke’s vocals. Clarke sings mournfully and honestly about death and loss. The roughness of the production actually compliments his delivery here, because he sounds distraught. His vocals are not perfect in the traditional sense, but the emotions captured feel authentic. This “realness” is often lost when a song is performed thirty times in a high tech studio and edited to the point that it’s flawless.

Overall, Alien Sunset by Cut Worms has a demo-like quality. This EP certainly has a distinct sound, but it leaves more to be desired. Max Clarke has proved himself as a songwriter, however I would like to see him expand his music to be more variegated and diverse. Apparently he will be releasing a full length studio album in 2018, and I am interested to hear if he will be able to maintain the personal, authentic feel of his music while improving the production and moving in some new sonic directions.