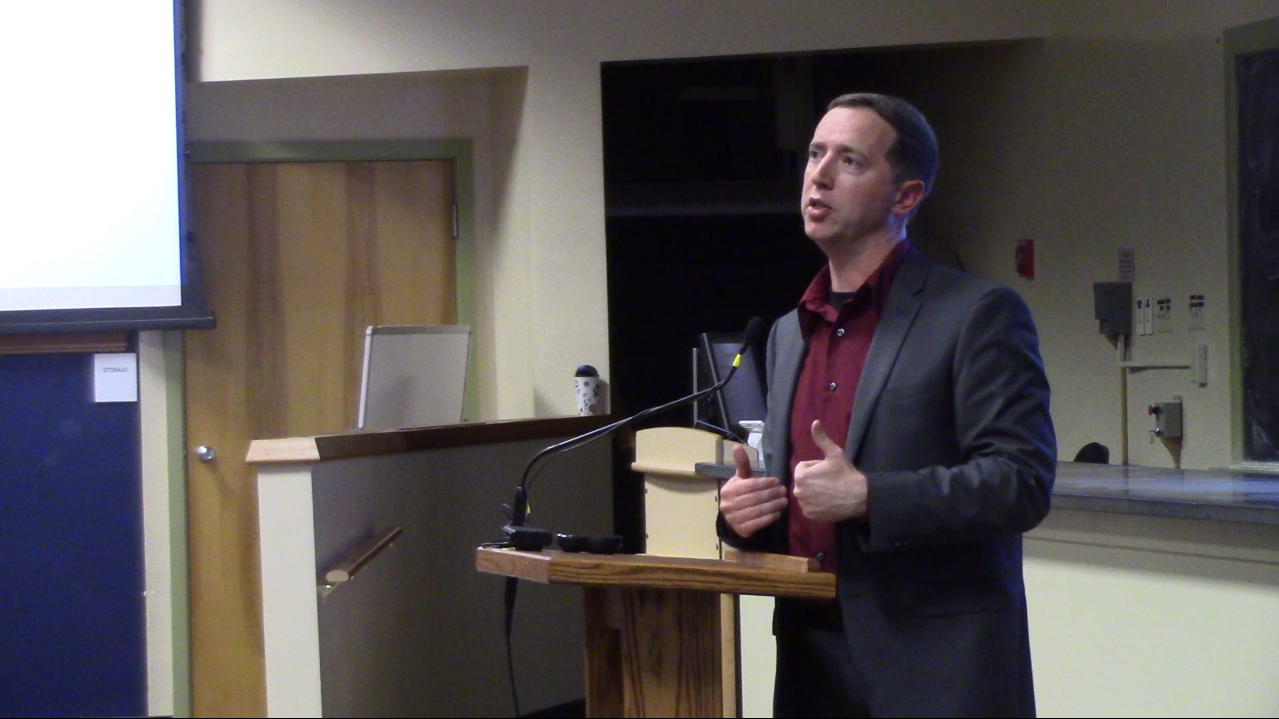 Dr. Todd Green, Associate Professor of Religion at Luther College, presented on professional Islamophobia Sunday evening to a packed Mara Auditorium.  Green is a regular contributor for The Huffington Post and has appeared in various media outlets including NPR, CNN, Al Jazeera, France 24, and Reuters to speak on Islamophobia.

The lecture, sponsored by the Religious Studies Department and the Peace and Justice Studies program, was arranged to develop the idea of Professional Islamophobia before the presentation on “The Political Ramifications of Islamic Fundamentalism” by Robert Spencer on Wednesday.

Green went on to define Islamophobia as “the irrational fear hostility and hatred of Muslims and of Islam. It is also the exclusionary and discriminatory practices that arise from that fear and hatred.”

Green defined professional Islamophobia as “a cadre of extremist bloggers, authors, some politicians, [and] pundits, who make a living and a career off of dehumanizing and demonizing Muslims.”

He highlighted three full-time practitioners of professional Islamophobia: Pamela Geller, Robert Spencer, and Frank Gaffney.  Geller and Spencer, co-founders of the American Freedom Defense Initiative and noted for their “Defeat Jihad” poster campaign, were both banned from the United Kingdom by then Home Secretary Theresa May in 2013.  Green noted that Theresa May, now Prime Minister and leader of the Conservative party, is not a “flaming liberal.” 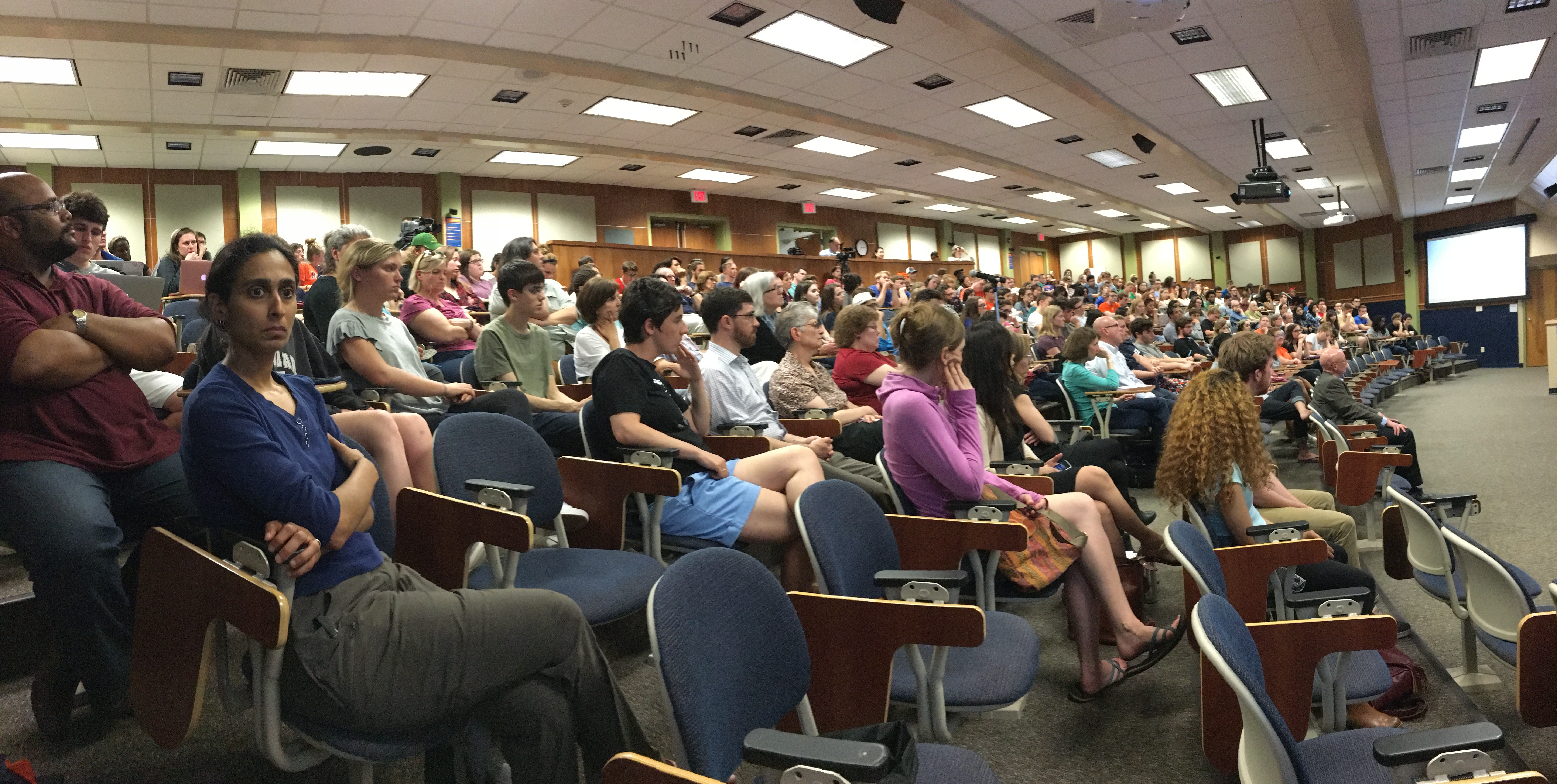 The first theme was a violent Jihad.  Green referenced a quote from Wednesday’s speaker, Robert Spencer: “Traditional Islam itself is not moderate or peaceful.”  In a rebuke, Green cited statistics from the FBI, Triangle Center and West Point which showed that 94 percent of terrorist attacks carried out on U.S. soil were committed by non-Muslims, and that other, specifically political, demographics were more likely to perpetrate violence in the U.S.

The second theme was that of civilizational Jihad.  This is the idea that Islam is silently entrenching itself throughout the government.  Frank Gaffney, who served in the Reagan administration and since has begun his own think tank, is known for his conspiracies in which a Muslim Brotherhood is infiltrating the highest echelons of the government.

The third theme involved creeping Sharia.  Green shared a quote from Secretary Ben Carson to demonstrate this theme: “I would have problems with somebody who embraced all the doctrines associated with Islam.  If they are not willing to reject sharia and all the portions of it that are talked about in the Quran – if they are not willing to reject that, and subject that to American values and the Constitution, then of course, I would [not support a Muslim as president].”

The last theme involved Taqiyya, which is an Arabic term which allows Muslims to hide their religion when under threat of persecution.  Green argued that this somewhat obscure facet of Islam has been presented as a central part of the religion allowing people like Spencer to label Muslims as untrustworthy.  He likened this characterization to how anti-Semitic people have maligned Jews as shifty.  Green pointed out that this mischaracterization of Taqiyya allows for the delegitimation of Muslims’ narrative.

Spencer received $186,237 from the David Horowitz Freedom Center and an additional $29,461 from the American Freedom Defense Initiative for his work according to IRS 990 forms.

Green then detailed ways in which Muslims were being discriminated against in the United States. Hate crimes soared in the year after 911, and have normalized to levels five times higher than before 2001.  Mosques experienced a 345 percent increase in conflicts in 2010-2012 compared to 2008-2010 according to the ACLU.  Ten states have enacted anti-Islam legislation mostly referring to Sharia law.

Green then suggested three ideas to avoid Islamophobia.  First, develop “Holy Envy.”  This means that one should admire someone else’s piety, not judge them for it.  Second, “Learn from practitioners, not enemies” or as Green also stated “Learn from practitioners, not from Robert Spencer.” To this point, Green cited that two thirds of Americans believe they don’t even know a Muslim person.  Lastly, “Don’t compare their worst to our best.” 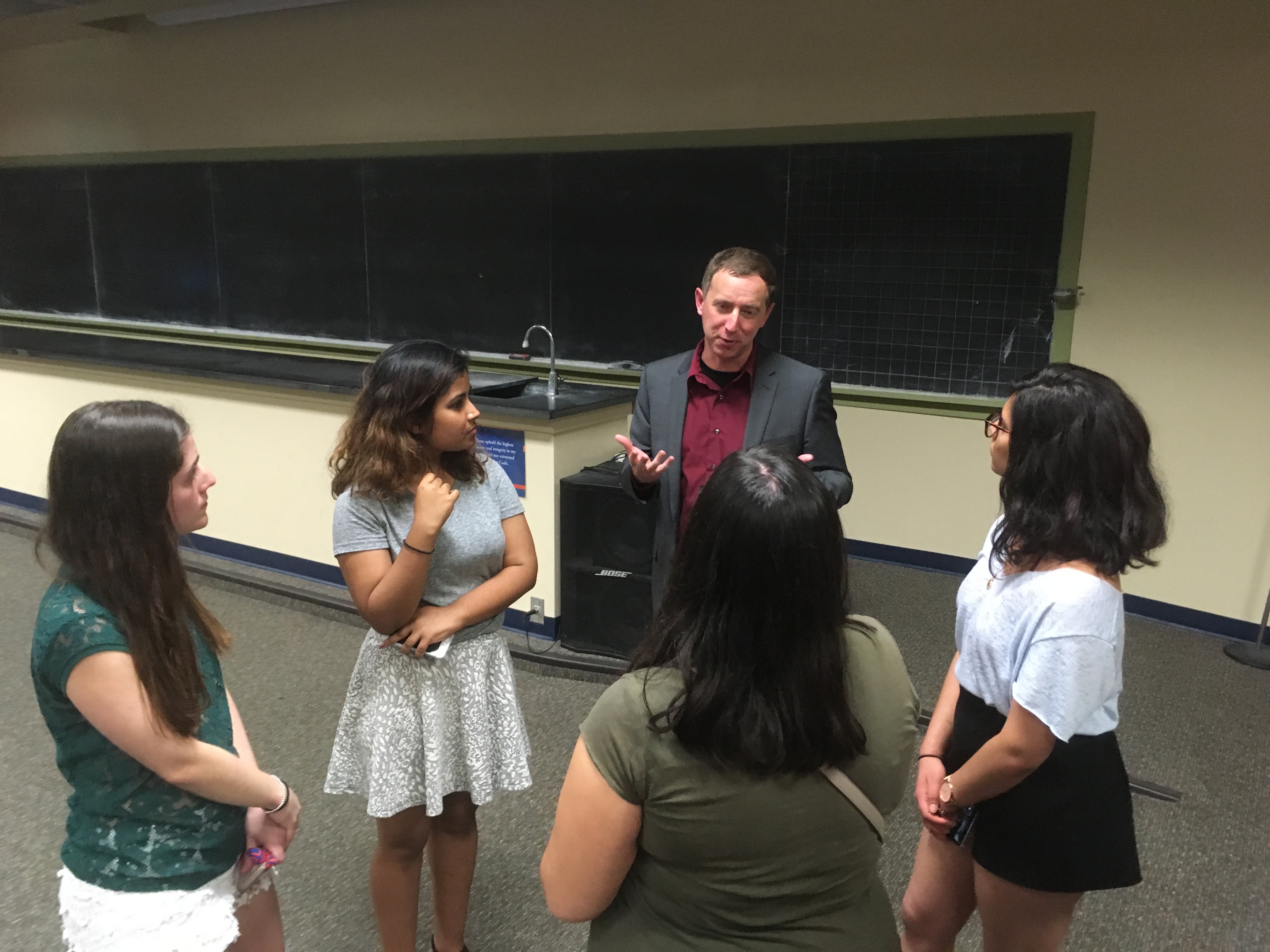 After the lecture, questions were taken from the audience.

The first member of the audience to ask a question was a Quran-carrying 84-year old member of the Gettysburg community who repeatedly said “I’m nobody.”

He questioned the ethos of the lecturer by asking specific questions about Islam, and claimed that Green mischaracterized and trivialized the danger of Islam.

Although the event was largely restricted to attendees with college IDs, Bill Lafferty, Director of the Department of Public Safety, said that certain non-members of the campus community were permitted to attend with prior approval.

After the lecture, Green commented that there is usually one person, usually carrying a Quran, who makes such an appearance.

Later, Brittany Russell, a sophomore, asked whether it is better to go to the Robert Spencer lecture and engage him in debate or to protest outside and attend the Muslim Solidarity Rally.  Green noted that no matter what decision students made, Spencer would construe it to fit his narrative. He recommended supporting Muslims on campus however they need it.

Senior Julie Davin asked how history might remember Gettysburg’s decision to bring Spencer to campus and students who went.

Green responded: “He is free to hate, [but]… does he have the Constitutional right to come? No he does not.” He suggested the campus should raise the bar for prospective speakers, which drew applause from the audience.

One of the final questions of the evening came from first-year Otis Pierce and was directed to President Janet Morgan Riggs, who, along with many college administrators and faculty members, was in attendance for the event.

Pierce read from an email President Riggs sent after the November election: “Our conviction that a residential college best promotes the sense of community, central to a liberal arts education, in which personal relationships between students, faculty, and staff can flourish,” before asking Riggs: “How do you expect us to flourish in fear?”

Riggs responded: “I do want to remind you that this is part of the deal this week.  It’s not to have one speaker here, but to have someone here that I hope will provide all of you with the toolbox to respond to what’s coming next. That was the point of having this lecture tonight. I am not interested in cultivating a community of fear.  You see Jerome sitting next to you, who I know is putting together a gathering at the same time as Spencer is here on the same night.  I’m sure all of you have heard about that.  If you haven’t, there’s your advertisement.  That is a way to come together. […] It’s not protesting the speaker, but it’s demonstrating solidarity with the Muslim members of this community. My fantasy is that we will have four or five people sitting in a room with Robert Spencer, and the other 2,500 members with Jerome at his rally.  I think that’s what we can do to counter the fear that a speaker like this can bring to this community.”