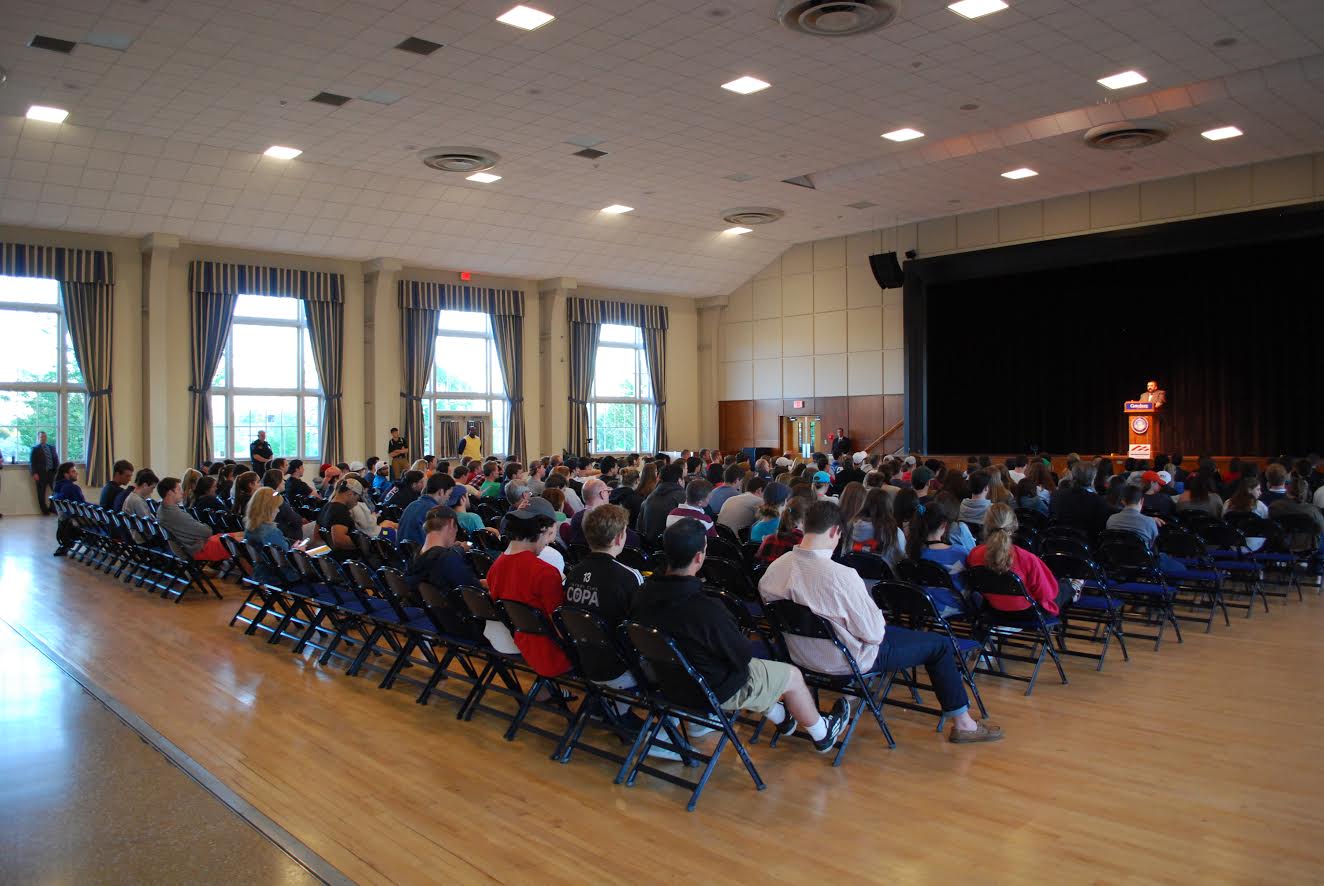 As Robert Spencer took the stage of the CUB Ballroom Wednesday night, the audience seemed unsure of what would happen next. On the heels of students at the University of Buffalo shouting down Spencer last evening, Jack Ryan, Vice Provost of Gettysburg College, had warned the audience to engage in civil discourse in listening to Spencer’s speech, which was sponsored by the Gettysburg chapter of the Young Americans for Freedom (YAF).

Spencer opened his speech by commending students who attended for standing up to pressure levied on them by other members of the campus community, many of whom attended a simultaneous Muslim Solidarity Rally in front of Penn Hall.

“There is one kind of diversity that is not valued generally in an academic setting,” he said, “and that is intellectual diversity. I commend you for having the courage to brave the stigma and to come here tonight despite the tremendous pressure that was placed on you not to come.” 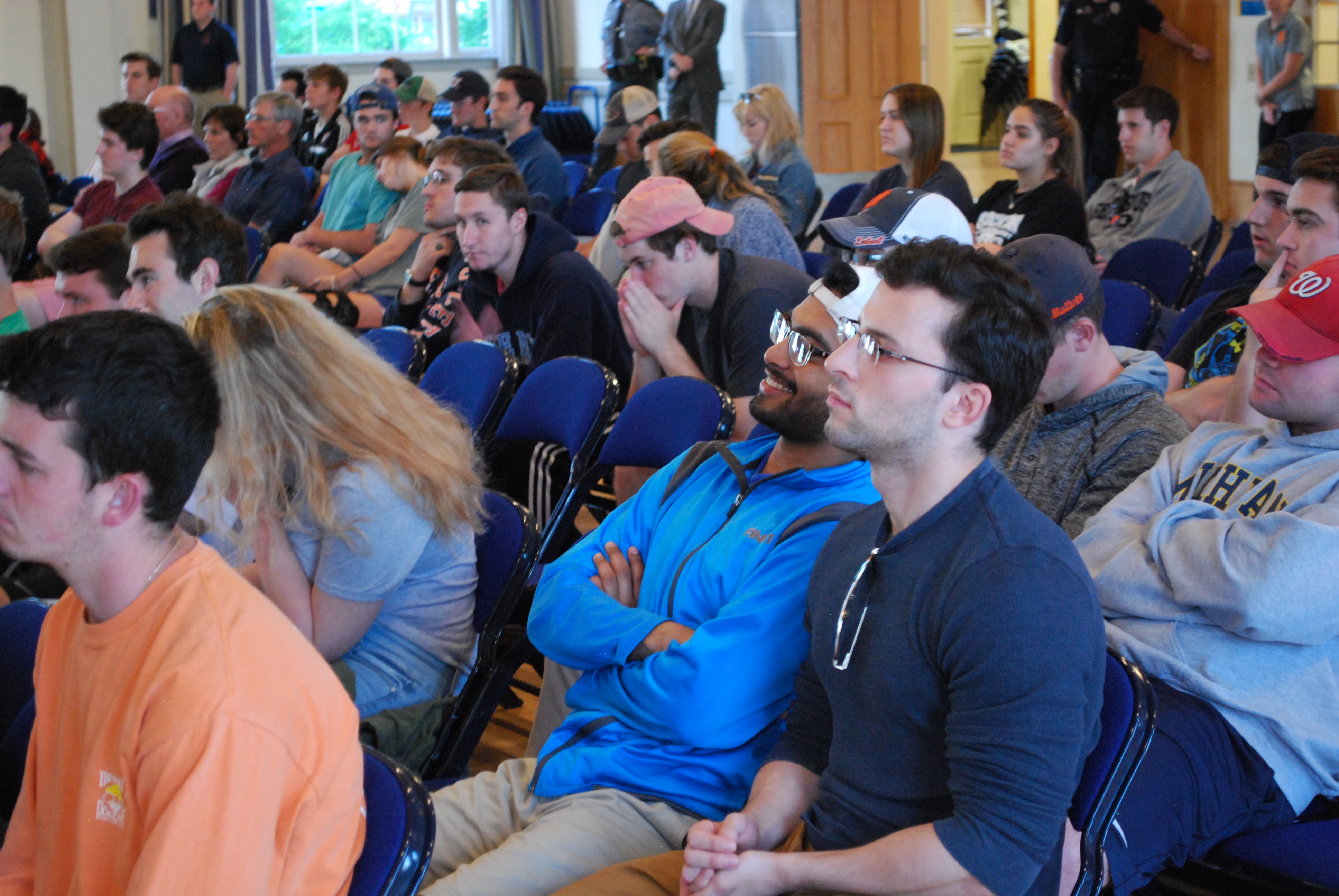 He continued by deconstructing arguments made by Dr. Todd Green, an associate professor of religion at Luther College, in a speech Sunday on “Professional Islamophobia,” something Green accused Spencer of perpetrating.

Spencer suggested that Green had committed “slander” and is part of a well-funded movement that aims to delegitimize any suggestion that jihad is an intrinsic component of Islam.

“Islamophobia is a thought-crushing device, a tool for intimidating people into being afraid for speaking out about jihad activity,” he said. “Like in any religion, there is a spectrum of belief, knowledge, and fervor among its adherents. You can’t generalize from the teachings of Islam what any individual Muslim is going to do … but these things do not nonetheless become not part of the Islamic tradition.”

Spencer cited specific quotations from the Quran — including 4:3, 4:24, and 33:50 — that ostensibly justify actions by Boko Haram and the Islamic State in Iraq and Syria (ISIS) to condemn female prisoners of war to sex slavery.

Spencer closed his speech by suggesting that Gettysburg College President Janet Morgan Riggs, who said at Green’s lecture on Sunday that her hope was for Spencer to speak to a crowd of four or five and for the Muslim Solidarity Rally to have 2500 attendees, should either substantiate — based on Spencer’s writings — that he promotes hate and bigotry or resign.

During the subsequent question and answer session, several students posed substantive questions based on topics from Spencer’s lecture including the origin of jihad, propaganda in ISIS’s Dabiq magazine, and whether American foreign policy ultimately foments violence towards the US irrespective of religious jihad.

“I don’t believe that there is wholesale victimization of Muslims in the United States,” Spencer said, responding to a question about whether he can conduct his presentations in a way that do not make Muslims feel unsafe. He also cited statistics on hate crimes against Muslims compared to other groups, which he says support his conclusion.

In addition, Timothy Smith, a college staff member who attended the lecture, suggested that Spencer’s comments were not sufficiently insightful for the payment he received and then began to discuss his family’s military history before he relinquished the microphone to a member of YAF and, on his own volition, walked out of the event.

Later, Michael Mancuso, a sophomore member of Student Senate, asked Spencer to retract his call for Riggs to resign given that she resisted calls from members of the campus community and alumni to cancel the speech.

Spencer declined and said that there was a contract signed that included First Amendment stipulations and that, had Riggs ultimately cancelled the event, the college would have been sued. Jamie Yates, Director of Communications & Media Relations, refuted that allegation after the event and said she has no idea what made him say that.

“I think his response mischaracterizes President Riggs’ quotation and that his remarks were in poor taste,” Mancuso said. 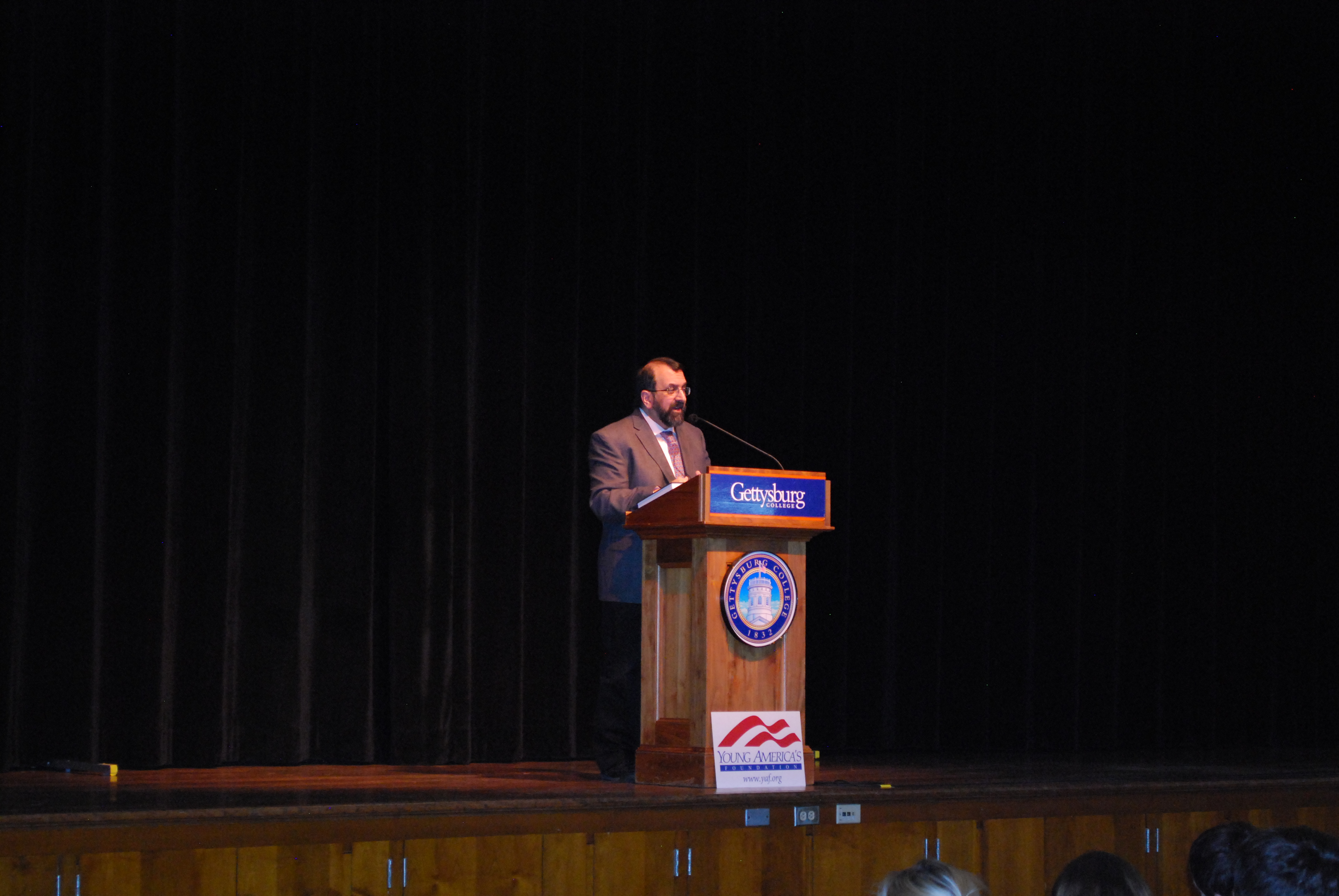 Ultimately, the event drew a crowd that nearly filled the 400 seats that were set up in the CUB Ballroom.

Many students attended out of a curiosity to hear Spencer’s point of view amid the controversy it had caused on campus prior to the event.

“I’m interested in hearing what he has to say,” said sophomore Luca Menicali prior to the event. “Going in, I know what my viewpoints are, and I will critically analyze what he has to say. All in all, I think it was the right decision to have him come and share his thoughts with us.”

YAF President Scott Moore said he was pleased with how the event transpired.

“It surpassed expectations really,” he said. “There were no violent disruptions, no protests. I think everything went as well as it could have.”

Video of the Q&A session after Spencer’s lecture