Bridging the gap between the kitchen and Renaissance art 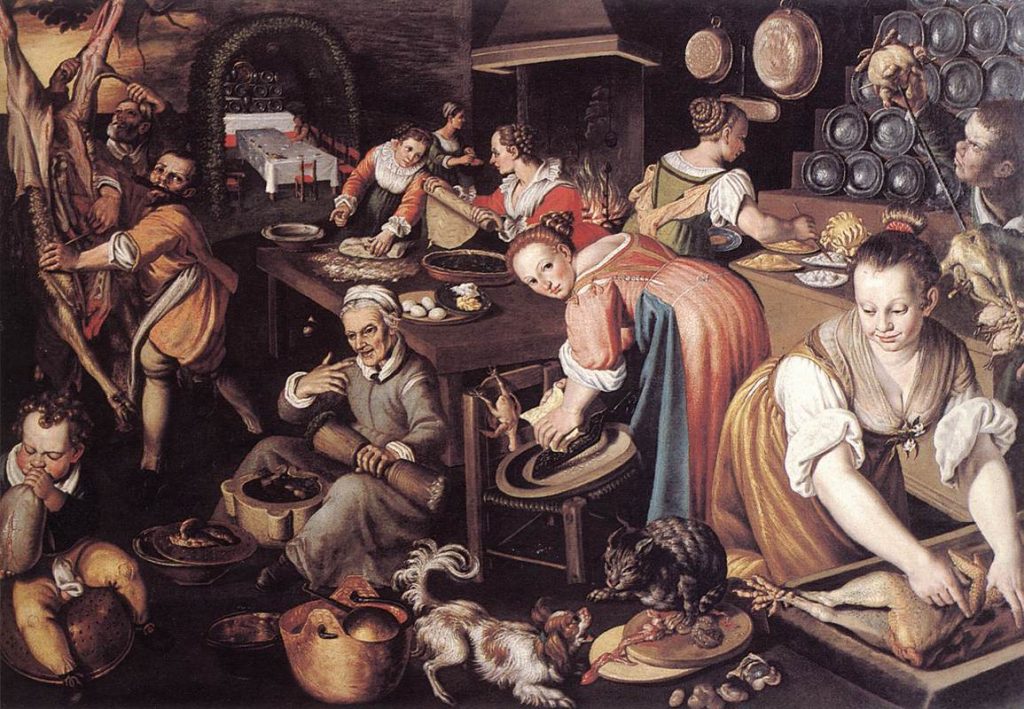 A cookbook, a Vincenzo Campi painting, and the evolution of the kitchen in the home. Deborah Krohn, director of Masters Studies at the Bard Graduate Center, tied the three entities together at a lecture titled “Kitchen and Table in Renaissance Europe”, a part of Gettysburg’s “Year of Food”.

Krohn, with four forthcoming publications, focuses her teaching and research on decorative arts of the Italian Renaissance, cultural history, and culinary history. She shared her research to a crowd of Gettysburg College’s health science majors, history majors, art majors, as well as professors and administration.

Krohn displayed a Vincenzo Campi painting on the screen for all to see. Titled “Kitchen”, and dated 1580, the painting features a chaotic and busy scene in which the wait staff of a home is preparing a meal for their family in a kitchen full of pots, pans, and other utensils.

Krohn stated that this painting helped inspire her to consider how cookbooks could potentially give clues as to how objects were used in the kitchen during the Renaissance.

“We see these objects in Renaissance paintings all the time,” Krohn said, “but we don’t get any context for them usually.”

She provided a visual analysis on the Scappi cookbook to other earlier cookbooks.

The illustrations seemed as though they displayed a story of people making meals together, while the Scappi cookbook appears more textbook-like. The Scappi features pages of descriptive illustrations with titles, and a key in order to understand each object to its full capacity.

Krohn still faces difficult questions ahead in her research. She admits that results have not been fruitful in trying to discover how practical these cookbooks actually were. She explained that the Scappi cookbook would have been entirely aspirational. Krohn compares it to buying a cookbook at the bookstore now because the food photography is so visually pleasing.

Krohn also admits that the recipes are exhaustively long. Some instructions would have required an entire professional staff of kitchen aids to make certain meals. Each meal, rich and decadent, would not have been made for a small family’s average dinner.

Krohn concluded her lecture with advice on graduate research. She expressed the importance of finding a source that can withstand great lengths of research. Krohn also said that in order to do cultural history, one should be specific and focused, but one should still ask big questions. She said that her own research process transitioned from a very specific idea into a much greater question, and then back to a very focused and detailed research topic.

“You just cannot predict where your research will go” Krohn said.

Daniella Snyder '18 is originally from Northumberland, Pennsylvania. She studies Art History and English. Daniella previously served as a staff writer, Business Manager, Social Media Manager, and co-editor in chief during her three years working for The Gettysburgian. Aside from her work with The Gettysburgian, she works for Residential & First-Year Programs, the Office of LGBTQA Advocacy & Education, and the Schmucker Art Gallery. Daniella studied abroad in Florence, Italy in the fall of her junior year and has participated in the Women's Center's annual production of The Vagina Monologues for the last three years.