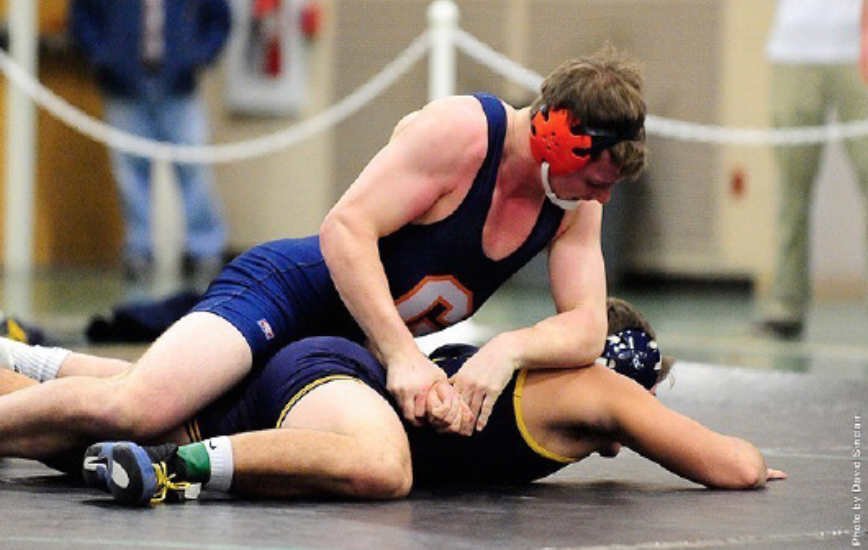 Stevens Institute of Technology claimed its first Centennial Conference championship, posting 102.5 points to edge out two-time defending champ Ursinus College. “It was not one of our better performances of the year,” says Head Coach Andy Vogel, “but for the most part, our team wrestled hard through every match.”

Junior Tyler Cunningham put on the stand-out performance of the day for the Bullets. Cunningham won his first bout against McDaniel’s Jake Pooton in a 6-3 decision. He took a fall in his second round to Stevens Institute of Technology’s AJ Kowal, the eventual champ of the tournament.

Cunningham came up strong in his third bout with a decisive 8-1 victory over Muhlenberg’s Jake Gordon. A shoulder injury forced him to forfeit his final bout. Cunningham finished 4th overall at 174, matching his record from last year. A large portion of the Bullets’ lineup on Saturday were underclassmen. First years Noah Malamut, Jake Bracken, Quinn Merrigan, and Anthony Puca all made their Conference debuts last weekend.

Coach Vogel is optimistic about the young team’s future, but still sees room for improvement. “Four of our five winningest wrestlers this season are freshmen,” he shared. “We have a very young team, and that showed up in some of our matches this past weekend. This is the best dual meet team we’ve had in quite a while, but the entire lineup needs some seasoning for us to have better results in tournaments.”

First years Merrigan and Puca put out very strong performances in their debuts, narrowly missing opportunities to compete for spots on the podium. Merrigan picked up an 8-3 decision win over McDaniel’s Benjamin Mitchell at 149. He was barely edged out in the semifinal by Stevens’ Zach Wilhelm in a very close 6-5 loss.