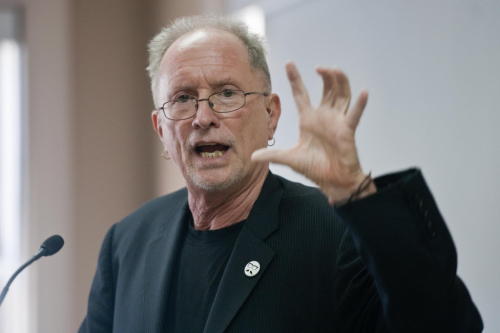 Elementary education theorist, author, professor and activist Bill Ayers spoke in the College Union Building on Oct. 1 to share his opinions on the current state of the American educational system.

Much controversy surrounded the event due to Dr. Ayers’ past work as an activist in the Weather Underground, an organization he founded in 1969 in response to United States involvement in the Vietnam War.

Prominent leader of several other activist organizations, Dr. Ayers headed several militant protests that gained him national notoriety. Though he is well known for acting upon his self-proclaimed “radical leftist beliefs,” his colleagues extol his work in education reform. In 1997 Chicago awarded him the Citizen of the Year award for his accomplishments in the Chicago Annenberg Challenge project, a distinction that reflects his prominence in academia.

“Some call him a domestic terrorist and some call him a hero,” said Professor Miyazawa.  She went on to praise his academic work: “Bill Ayers creates a space of possibilities wherever he goes. There is no one like Bill Ayers. He shows that there is no difference between theory and practice.  He is ‘doing philosophy.’”

Perhaps due to the contention Dr. Ayers’ appearance spurred, the room was packed to hear his views on education.

“Education is the calling that allows other callings to come to fruition.  In this moment, teaching is not held in high regard […] We posit education as a product,” claimed Bill Ayers. “Education is a human right, not a product.”

According to Dr.  Ayers, a society’s educational system reflects the society itself. F o r example, authoritarian regimes teach obedience to authority. Bill Ayers believes that in a democracy every human being is of incalculable value. To him, democracy encourages freedom, entrepreneurship, and invention, all of which require citizens to develop a mind of their own.

Dr. Ayers promotes teaching students to question the world around them to cultivate their creativity. However, many teachers find it difficult to encourage creativity in the classroom due to rigid testing standards and frequent teacher evaluations.  According to the law in Chicago, 30% of teacher evaluations must be based on standardized test scores.

“The competitive model of education throws a stake in the heart of teaching […] in a way we’re incentivized to cheat because everything depends on this test.” Dr. Ayers asserted.

Dr. Ayers further admonished the Chicago public school system for inhibiting creativity when they banned the critically acclaimed graphic novel Persepolis by Marjane Satrapi because one parent complained about the explicit nature of one of the drawings.

Upon hearing this news, D r. Ayers contacted the principal of a prestigious private school in Chicago, where he discovered that Persepolisis required reading for grade seven.

“Privileged schools see real art, read real literature. Our problem is that we’ve bought into the frame of the business, that education is a business,” professed Dr. Ayers.

“Education should engender the fullest development of the human being.”