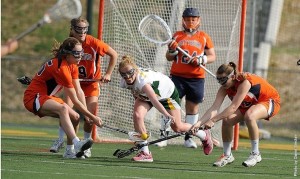 Senior Lindsey Robinson notched the game-winning goal in the Bullets’ match-up against CC rival, Franklin & Marshall. The Lady Bullets came out of the nail-biter 12-11 and earned a first round bye in the CC tournament. (Photo courtesy of David Sinclair)

With only one loss on the season and a perfect conference record, the Gettysburg women’s lacrosse team heads into the Centennial Conference tournament with a large target on their back, and no team is looking for a rematch more than the Franklin & Marshall Diplomats.

The Lady Bullets (16-1, 9-0 CC) have been the team to beat in the region since 2011 when they claimed the National title. This year has been no different. Consistently ranked in the top five all season long, the Bullets have played high-intensity lacrosse every game. With a competitive schedule, including six top 20 opponents, the Bullets have risen to multiple challenges throughout their season, and the conference tournament should serve as a great preview for what to expect from them in the NCAAs.

After an abrupt and disappointing end to last year’s promising season, the Bullets showed in their game against F&M last Wednesday that they are hungrier than ever for a conference title and for a top seed in the tournament.

In the rivalry matchup between the fifth-ranked Bullets and the sixth-ranked Diplomats, the Bullets prevailed 12-11 in what turned out to be a nail-biter down to the last minute. Senior Lindsey Robinson put away the game winner with 1:40 on the clock, and First-year Lindsay Clinton made a save with 25 seconds left to play to hold the lead for the win.

The victory clinched the top seed in the conference tournament for the Bullets and gave them hosting rights for the weekend of May 4-5.

“Wednesday’s win was a big one,” said Senior captain Lindsay Menton. “The game was very competitive and exciting. We were all determined to come out on top and I think that really contributed to our success.”

Junior Lauren Pruitt played one of her best games all season, tying her season high with five goals. First-year Amanda Borucki was also on top of her game, putting the ball in the back of the cage for a season high four times.

The two national powerhouses tied the score six times in the opening period. The Bullets were able to catch some momentum right before halftime, adding two goals, one a piece from Pruitt and Borucki, before the buzzer. The second half opened with another Borucki score, giving the Bullets a 3-goal lead with 28:11 on the clock.

The Diplomats then went on a 3-1 goal run before Gettysburg’s Pruitt was able to capitalize off a pass from First-year Maggie Connolly to give the Bullets a two goal lead. Fifty-three seconds later, the F&M scored again, bringing the Bullets’ lead back to only one.

Towards the end of the second half, Diplomat goalie Kelsey Hoffman made a crucial stop on a point-blank shot from Sophomore Bridget Kenny, which was followed by a game tying goal with only 3:35 left to play.

The game-winner was fired with 1:40 on the clock. Sophomore Kelsey Markiewicz’s feed from behind the cage hit Robinson perfectly for a quick stick that was too fast for Hoffman.

In the Diplomats’ final attempt to bring the game into overtime, F&M’s offense was unable to produce a successful play and Clinton was able to block their final shot to keep the lead for the Bullets. Menton picked up the ground ball and carried it down the field to ensure possession until the end of the game.

While the score and game were close, the stats were all in Gettysburg’s favor. The Bullets had a 31-18 advantage in shots and a 16-9 advantage in draw controls. The Bullets also showed discipline by matching their season low of eight turnovers.

“While this win gave us a lot of confidence going into this weekend’s conference championship,” Lindsay Menton said. “We know we will have to keep working hard to get ready. If we play the way we did Wednesday and really make every possession count while fine tuning some of our mistakes, we have no doubt we will defend our Centennial Conference title.”

The Bullets closed their perfect conference regular season with an 18-0 win over Bryn Mawr College on Saturday, April 27.

Gettysburg has a first-round bye in the Centennial Conference tournament and will be playing the winner of the McDaniel College/Washington College game on Saturday, May 4 at 1:00 p.m. on Clark Field.