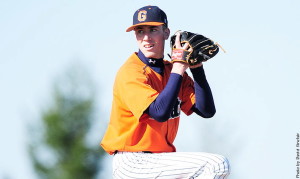 Senior Ryan Taylor broke the Gettysburg record for career innings pitched and has a stellar 2.05 ERA.

Coaches at any level always love to talk about consistency.  As they often preach, the best teams are consistent, and the best players are those who can bring 100 percent effort to every practice and game.  Baseball is a consistent game, with pitchers needing to maintain their mechanics throughout every game, and field players always needing to be dialed in.

Although Senior Gettysburg pitcher Ryan Taylor broke the school record for career innings pitched and demonstrated a high level of consistency in the past, the Bullets lost to Franklin &Marshall on Friday six to one.  After two innings, F&M went up by two runs.   After the top of the fourth inning, F&M led four to zero because of a two run single from Alex Vescera.  However, in the bottom of the 4th inning, the Bullets scored their first run of the game, with junior Austin Davis scoring following two back-to-back singles.  Their efforts ended up not being enough to fill the void created by Franklin and Marshall in the first four innings.

First-year Andrew Kelly stated after the game that this was a disappointment for Gettysburg.  “The loss against F&M was a tough one to take,” Kelly said. “We came out fired up because of the way we lost to them earlier that week, but we just couldn’t get the bats going.”  Although they were throwing their ace pitcher and F&M was not, the Bullets couldn’t squeeze out a win.  Following the game, Coach John Campo stressed that Gettysburg needs to perform better with men on base.  “We just got outplayed,” Campo said. “We need to execute better with runners in scoring position.”

Although disappointed, Coach Campo has high hopes for the remainder of the season.  Hopefully, the Bullets will be able to regain control of their season and gain a more consistent rhythm.

The results for Gettysburg since then have been mixed. Although they were swept in a double-header by Swarthmore on Saturday they won the next game against Dickinson 15 to 11. Junior Al Posh had a career day, breaking a Bullets record with five hits in six at-bats, including a RBI double in an eight-run third inning.