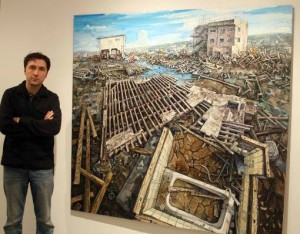 Kobaslija, pictured above with one the paintings for which the artist has received critical praise, focused his efforts on the devestation of Kesennuma, Jappan that followed recent earthquakes and tsunamis. (Photo courtesy of GCC&M)

Amer Kobaslija, assistant professor of art and art history, was awarded a 2013 John Simon Guggenheim Memorial Foundation Fellowship. He was selected as one of 175 awardees, chosen from a group of almost 3,000 applicants. Kobaslija was recognized for his ongoing project painting the earthquake and tsunami-devastated town of Kesennuma, Japan and its reconstruction.

Kobaslija was honored to receive the Fellowship for his work in Japan:

“Being able to call myself a Guggenheim Fellow is an enormous privilege. I am eternally grateful to the Guggenheim Foundation for the honor given to me for my work in Japan. Through these paintings, I draw attention to the ongoing reconstruction process in Kesennuma, a coastal town in northern Japan, which was all but washed away by a tsunami in March 2011. What was once a vibrant, scenic community had become a heart-rending tableau of destruction, punctuated by seemingly unending piles of rubble.

Having grown up in the war-torn Bosnia of the early nineties, I cannot help but draw parallels between the human-caused destruction in the land of my ancestors and the calamity that befell Japan, with its confluence of natural disaster and human failings. My wife Akiko’s family is from Japan, which was another reason why I needed to engage as a visual artist.”

Originally from Bosnia, Kobaslija fled the war-ravaged country in 1993, travelling to refugee camps in Germany, and eventually making his way to Dusseldorf where he attended the Art Academy. In 1997, Kobaslija was offered asylum by the United States and immigrated to Florida. He completed his Bachelor of Fine Arts in Printmaking at the Ringling College of Art and Design in Sarasota, and went on to pursue a Master of Fine Arts in Painting at Montclair State University in New Jersey. Kobaslija is currently an assistant professor of art and art history at the College, and divides his time between Gettysburg and New York City.

Kobaslija has had numerous one-person exhibitions in Paris, New York, Los Angeles, San Francisco, Chicago, and Miami. He is represented by George Adams Gallery in New York. Kobaslija’s works have been reviewed and printed in publications such as The New York Times, Art in America, ArtNews, New York Magazine, The San Francisco Chronicle, and The Florida Times Union.

The great variety of backgrounds, fields of study, and accomplishments of Guggenheim Fellows is one of the most unique characteristics of the Fellowship program, which makes selections based on prior achievement and exceptional promise. In all, this year’s Fellows, who range in age from thirty to seventy-six, represent fifty-six disciplines, eighty-five different academic institutions, thirty states, and three Canadian provinces.

Guggenheim Foundation President Edward Hirsch said, “It’s exciting to name 175 new Guggenheim Fellows. These artists and writers, scholars and scientists represent the best of the best. Since 1925, the Guggenheim Foundation has always bet everything on the individual, and we’re thrilled to continue the tradition with this wonderfully talented and diverse group. It’s an honor to be able to support these individuals to do the work they were meant to do.”