New Jersey outlaws use of tanning booths for minors 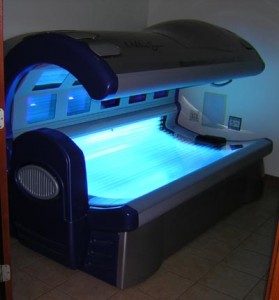 Over one million Americans tan in tanning salons each day. Although tanning can hide skin imperfections, give the allusion of a summer glow and even mask cellulite, it can also have devastating effects such as skin cancer, wrinkling and sunspots. Most disturbingly, it can accelerate skin aging by ten to 15 years. Individuals who have a tanning addiction are comically referred to as “tanorexics.” These people love tanning so much because they crave the endorphin release they receive from tanning beds. It has even been found that when “tanorexics” do not tan, they may experience withdrawal symptoms similar to those of a smoker who tries to quit smoking. Many tanners suffer from body dysmorphic disorder, a mental illness in which the affected person is concerned with their body image and concentrates on one or more features of their body, which in a “tanorexic’s” case, is their skin. Doctors recommend that individuals avoid using tanning beds because of the exposure to UV-A and UV-B rays. If you must be out in the sun, limit it to 30 minutes while wearing a sunscreen of SPF 30 or higher. Research has shown that those who begin tanning before age 35 have a 75 percent higher risk of getting melanoma, a highly metastatic cancer that can only be cured if caught early.

New Jersey Governor Chris Christie recently signed a law stating that people under 17 are not allowed to tan in tanning beds and people under 14 are not allowed to get a spray tan. This law was undeniably created as a result of a recent incident when a New Jersey woman, Patricia Krentcil, was indicted for bringing her five-year-old daughter into a tanning bed, causing her legs to get a bad sunburn. The kindergartener told her friends at school that she went tanning with her mom and a teacher overheard it. Her mother was charged with child endangerment and denies that she brought her daughter into the bed with her. She said that she only brought her into the room and that her daughter’s sunburn came as a result of playing in the yard. California and Vermont have already banned indoor tanning for minors and other states such as Arkansas, Georgia and Virginia require parental permission for use of tanning facilities. With more and more states outlawing tanning for young people, scientists hope that it is just a matter of time before it is outlawed completely.