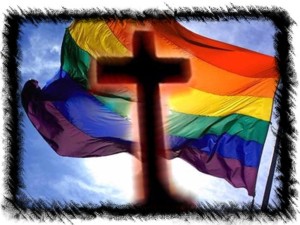 I am a Christian, and I would like the chance to give my two cents on the issue of same-sex marriage.

I bet that I know what all of you are thinking—”Oh, it’s just another Christian who’s going to quote the Bible at me, tell me that homosexuality is a sin and that anyone who supports it is going to hell.”  But stay with me here, because I don’t think that you’ve heard this before.

See, I’m a Christian and I support same-sex marriage.

You did, in fact, read that correctly.

So many Christians I know look to the Bible to provide the final authority on whether or not homosexuality is a sin and whether they should be in support of same-sex marriage.  For me, the Bible isn’t very explicit about the issue of homosexuality and same-sex marriage.  What it is very clear on, however, is that as Christians, we are called to love.

It’s repeated over and over in scripture, and Jesus himself says that the two greatest commandments are to love God and love others.  It doesn’t say to love others only if they are heterosexual, but it says to love.

By denying marriage to those who are not heterosexual, we are denying people their rights.  How is that loving?

The Bible also says that we are not to judge others because of their sins because no one is perfect and everyone has sin that is just as bad.  Don’t get me wrong here, I am not saying that homosexuality is or is not a sin, I am just pointing out that all of us are imperfect beings.

I am not perfect, so I cannot fault others and deny them their natural rights simply because I do not agree with them.

Our country was founded upon freedom and individual rights—all the things that we are denying non-heterosexuals by not allowing marriage equality to exist in America.  Our country was also founded upon the idea of separation of church and state.   And yes, some may argue with me that America was founded as a Christian nation because many of the laws we have are based on biblical laws.  But have you ever thought that maybe we adopted those laws because they are good laws to keep our society safe and at peace? So yes, we should keep religion out of government.  But I will always justify my political views by my faith.  I will forever support marriage equality not because I support freedom, equality, and all of the principles our country was founded upon, but because as a Christian, I am called to love and not to judge.

I am to treat my brothers and sisters how I would like to be treated, regardless of their race, gender or sexuality.  What a person does is none of my concern; that’s between them and God.  How I treat that person in the midst of that—that’s up to me.  And I would rather love than hate.