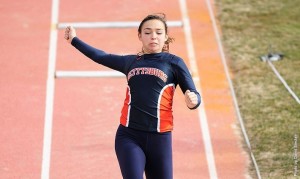 The Gettysburg College men’s and women’s track & field teams performed well at their own Mason-Dixon Invitational on Saturday in Mussselman Stadium.

The women’s team edged Division II Millersville University by three points to take home the team title with a score of 120. The Bullet men took second among 14 teams, scoring 126 points to place behind only the University of Mary Washington, which posted a score of 162.

On a day when gusting winds tempered performances, the two teams combined for five victories, including four on the women’s side. Senior Anna Schneider earned her second win in as many weeks, capturing the 3,000-meter steeplechase in a personal-record of 11:58.91. She becomes just the second Bullet in school history to break 12 minutes in the steeple, as Stephanie Shull ‘04 set the school record of 11:33.63 in 2004.

Also coming out on top were Senior Christine Esposito, who captured the 5,000-meter run in 19:07.50. Sophomore Danielle Bernini claimed the high jump with a mark of 4-11 3/4 while First-Year Katie McCoubrie used a leap of 16-1 1/2 to prevail in the long jump.

Twelve other Bullets contributed to the team score by placing among the top-eight. First-year Julie Laudenschlager broke the school record in the mile, placed second overall, and was the top collegiate competitor, clocking a 5:22.31. Sophomore Meagan Lesniak placed just four seconds behind Esposito in the 5,000 while First-Year took second in the 100-meter hurdles and the 100-meter dash.

Placing third were First-year Cynthia Greenberg in the high jump and Senior Amanda Koslo in the 800-meter run while First-Year Fedora Jean-Francois  came in fourth in the javelin. Junior Celia Hartz  took fifth in the discus and seventh in the javelin.

Sophomore Jackie Marotto also came in seventh in the steeplechase as did First-Year Betsy Atkinson in the pole vault and Sophomore Bridget Golato in the 5,000. In addition, First-Year Katie Burns, Sophomore Madison Senseney, and Schneider all added an eighth-place finish.

The men’s team received its lone victory from Senior Joe Sharp who won the mile in a gutsy finish, taking the lead in the final meters and finishing in 4:30.53. He also placed sixth in the 800, crossing the line in 2:00.57.

A pair of Bullets came in second: Senior Andrew Bay in the 100-meter dash and First-year Steve Avino in the 110-meter hurdles. Avino was also fourth in the high jump.