Two different girls like me. What do I do?

First of all, from all the people who have closer to zero people who like us, I would like to give you one big “boohoo” because this is not a real problem.

Second of all, I’m sorry that my first of all was insensitive. In order to find a solid solution for your problem that many people would be happy to have a few things must be cleared up.

Are the two girls friends? If they are, and especially if they are close friends, you should probably walk away now because this ends poorly for everyone. The one you don’t pick is going to be unhappy and the one you did pick (if she’s as good a friend as she should be) will be unhappy that her friend is unhappy and end it with you. Ovaries before brovaries, am I right? This is lose/lose situation. You shouldn’t have gotten involved, I’m sorry it took so long for me to break this to you because now it’s probably too late.

If the two girls aren’t friends you have a little more time to assess the situation. Now, under no circumstances should you attempt to date two girls at once. I know Archie Andrews pulled it off but he is not real so don’t model your life after his. You can, however, keep talking with both girls. Odds are you will like one more than the other. Pick the one you like more.

Don’t take too much time in deciding either because this is a small campus and people talk. Everyone likes to think their hookups and breakups stay secret, but through the vast network known as “girls talking to other girls” everything is pretty much out there.

When you’ve decided on one, cut the other girl lose immediately. Maybe you chose wrong and you’ll want a second chance with her someday, but you can’t keep her around just in case. It’s unfair to her and it’s unfair to the girl you’re currently seeing. I’m all for keeping backup sets of headphones and extra pens but people don’t quite work that way. 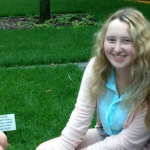 Aunt IzzieIzzie Gibson Penrose, class of 2016, has 18 years of advice to give. She loves telling people what to do (but doesn’t take offense if they don’t listen) and lives as strange a life as possible so she has plenty of anecdotes to share. Izzie also enjoys making jokes and baking cupcakes. Email her with questions, concerns, or anything LITERALLY ANYTHING that’s on your mind at gibsis01@gettysburg.edu. She promises to read every email she receives at least once, probably six times.