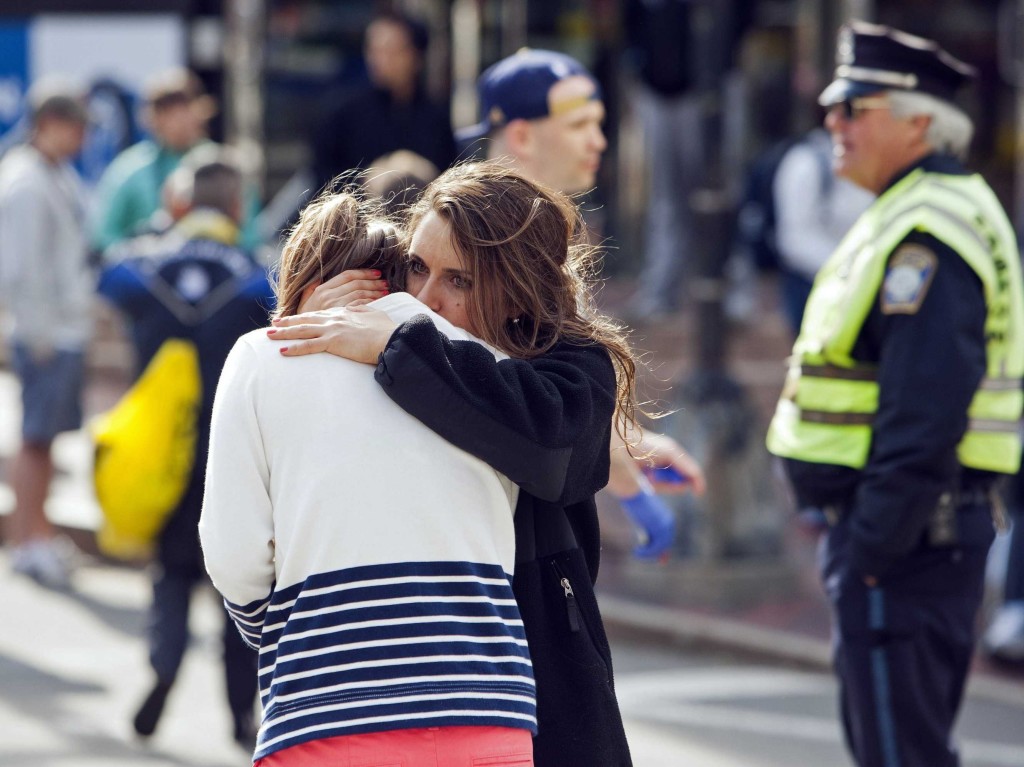 Boston.  It’s a thing that happened.  A tragic thing.  A horrible thing.  There are no words for this kind of thing.

I have memories of the weight of 9/11 and although I didn’t quite comprehend the magnitude of it then, I certainly felt the full weight of the bombing in Boston on Monday.

I spent the entire night sitting in front of my TV in shock.

I called my mom. I texted friends to make sure they were okay.

Because that’s what you do when these things happen.

But then, I took a step back.  Maybe it’s because I read this post by Patton Oswalt, or maybe I just needed to be reminded that we still have hope:

But I was wrong. I don’t know what’s going to be revealed to be behind all of this mayhem. One human insect or a poisonous mass of broken sociopaths.

But here’s what I do know. If it’s one person or a hundred people, that number is not even a fraction of a fraction of a fraction of a percent of the population on this planet. You watch the videos of the carnage and there are people running towards the destruction to help out. This is a giant planet and we’re lucky to live on it, but there are prices and penalties incurred for the daily miracle of existence. One of them is, every once in a while, the wiring of a tiny sliver of the species gets snarled and they’re pointed towards darkness.

But the vast majority stands against that darkness and, like white blood cells attacking a virus, they dilute and weaken and eventually wash away the evil doers and, more importantly, the damage they wreak. This is beyond religion or creed or nation. We would not be here if humanity were inherently evil. We’d have eaten ourselves alive long ago.

So when you spot violence, or bigotry, or intolerance or fear or just garden-variety misogyny, hatred or ignorance, just look it in the eye and think, ‘The good outnumber you, and we always will.’”

Doing a little research, I found reports of responders going back over and over again to rescue people, a Google Doc where hundreds of Boston residents offered housing for those stranded without it, restaurants feeding people for free, former New England Patriot Joe Andruzzi rescuing victims and so many runners continuing to run past the finish line to the hospital that they had to turn people away.

I also went back to a BuzzFeed post that I saw earlier this semester.  Simply Google “26 Moments That Restored Our Faith in Humanity,” and you’ll find it.  These stories bring tears to my eyes.  Because so often, we look around in the world and only see the bad.  The violence in Venezuela.  9/11.  The Steubenville Rape.

So yeah, Boston?  Horrible.  It’s a tragedy.  And I’m still upset over it.  But Oswalt is right.  The good outnumber the bad, and they always will.  So instead of worrying, instead of becoming hopeless, instead of hating humanity, I am going to love that fact that I can be a part of a world filled with such wonderful people.

Because we have people like Kevin Lugo, who are riding their bikes across America to raise money for Cancer Research.

We have people like Noor Oweis, who started a Day of Service in honor of Emily Silverstein and Cassi Franz, who organized the event this year.

We have people who run towards the explosion site instead of away from it.

My faith in humanity has not been destroyed by tragedy.  It has not even been shaken.  In fact, tragedy has strengthened it.  Tragedy forces me to look for the good in people.  It forces me to recognize how much more good there is than what the news shows.

And it challenges me to make an impact.

To restore someone else’s faith in humanity.

Because this world really is a wonderful place.  Just ask the people of Boston, who are receiving an outpouring of love and support from all around the world.