“Fagbug” tour serves as a vehicle of social awareness 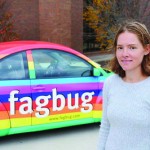 Erin Davies, an LGBTQ activist, film director and driver of the Fagbug came to Gettysburg College on Friday, March 20 to discuss her experiences confronting homophobia across America and offered Gettysburg students advice on how to deal with discrimination.

Fagbug’s mission, as stated on its website, is “to raise awareness about hate crimes and homophobia, to give a voice for those who are silent, to inspire others to take a stand against bullies and to be an example of how to overcome obstacles in bringing creative projects to life.”

Davies, whose Volkswagen Beetle was defaced in 2007 with the words “fAg” and “u r gAy” written on its window and hood, talked about the reactions she received as she drove her vandalized vehicle, now called the “Fagbug,” across America.

She interviewed 400 people on her cross-continental trip, asking for their opinions on her graffitied car, and compiled the year-long venture into a documentary also entitled “Fagbug.”

Davies played an eight-minute clip from the film in CUB Room 260, exemplifying the types of opinions expressed by interviewees. Responses ranged from verbal and monetary support to critical accusations of egotism and additional incidents of vandalism.

Davies made note of the fact that 99 percent of the negative feedback came from the LGBTQ community, but the majority of reactions were supportive.

Before creating her documentary, the responses Davies received taught her to “take the stance that homophobia is not just [her] problem, but everyone’s” and dedicate her time and resources to spreading awareness of homosexual rights and issues.

“[Davies’s journey] was a very brave, innovative endeavor to take on,” Ellis said. “I think she is a really strong person to have taken on the task of trying to educate and [openly discuss] with people about the power of words, vandalism and overcoming stereotypes and homophobia.  I think that her goal with her Fagbug program is to teach acceptance and cultivate curiosity and discussion.”

Davies’ Fagbug lecture kicked off the Spring Semester’s ALLies Week, which concluded on Wednesday, March 27 with an information table in the CUB. Other events included a drag party in the ALLies House, a discussion entitled “All Things Queer and Tea” and a showing of the film “Two Spirits,” which explores the cultural context of a murder perpetrated against a Navajo boy who exhibited both male and female traits.

Kay Krueger, the vice president of ALLies, explained the objective of this semester’s ALLies Week, which focuses on issues facing transsexual individuals.

“The main purpose is to get more awareness on campus for trans individuals,” Krueger said. “We just want to focus more on trans issues because it brings more awareness to the campus that trans people do exist and they need to be noticed and they need help being accepted. The more we educate ourselves, the more accepting we are.”

Though ALLies Week has ended, the club will continue to host speakers throughout the semester.

“We are bringing a Trans speaker, S. Bear Bergman on Tuesday, April 2 at 7 p.m. in the Science Center to do a talk entitled ‘Life, Liberty, & the Pursuit of Gender,’” said Ellis. “But we’re always looking for LGBTQA speakers that have a positive message to spread on our campus.”